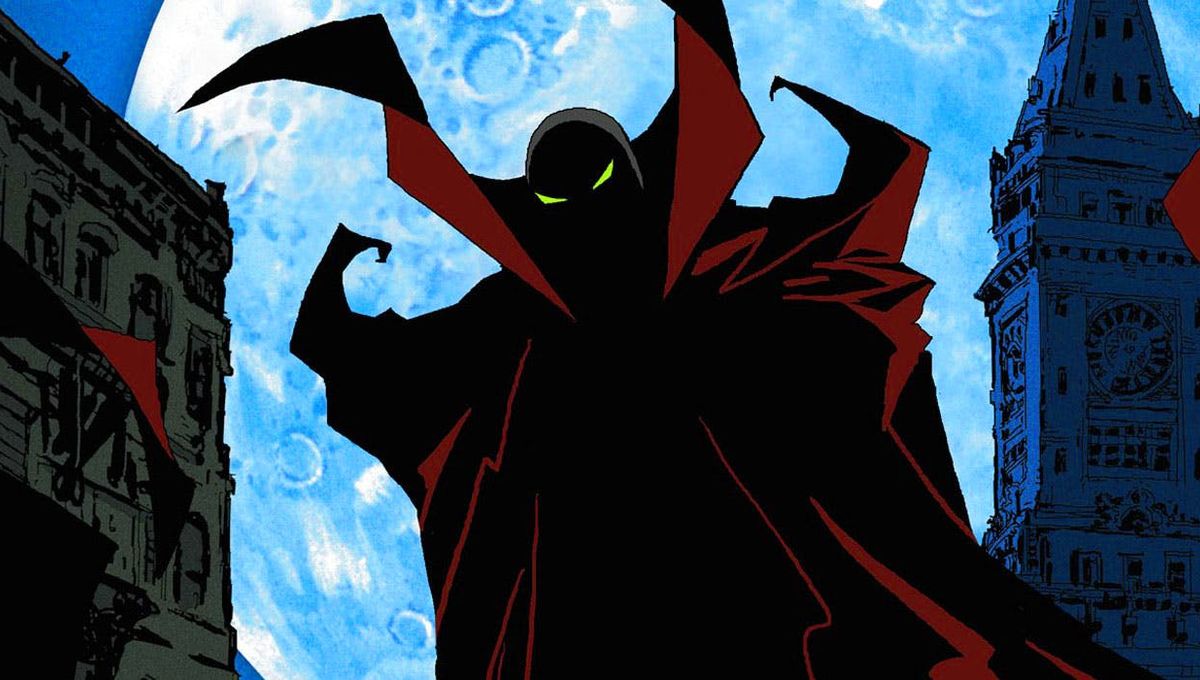 The 1990s was a troubling time for comics to say the least. The market was flooded with a lot of content that didn’t quite capture the audience and they  were failing. There were not a lot of exciting things happening with the Major publishers, but out of these issues came some new talent including artist Todd McFarlane making moves to create a name for himself. He did so by helping to create Image comics and ended up creating one of the most famous Anti-Hero characters within the medium. Spawn was an immediate success thanks in part to his dark backstory and incredibly striking visual design. The character blew up to immense popularity eventually getting his own movie. While the film had a following it didn’t quite capture everything that was the character until Todd partnered with HBO to bring him to life in a new medium, Animation. Todd McFarlane’s Spawn is one of the most interesting shows the network has ever produced and has easily gained a cult following after it’s immense critical acclaim. It has even made an impact to this day with his most recent inclusion as DLC in the very popular Mortal Kombat 11. This series is worthy of discussing in depth because it so happens to be an overlooked and underappreciated masterpiece in Adult Animation.

The series like the comics follows Al Simmons. A Marine Lieutenant who fought for the American government in Black Ops operations. Simmons is betrayed by a man he believed to be his friend and was murdered for doing so. In Hell he is greeted by Malebolgia, who is an approximation of Satan. Al is given the opportunity to come back to Earth, but there is a price. He comes back as a Hell Spawn years after his murder and is meant to be a tool to be used for evil purposes, but Simmons is not one to take anything lying down and consistently fights against  the forces of Malebolgia. He also begins a mission looking for revenge against those that have taken his life away from him. His beloved wife Wanda has moved on and his pain of losing her continues to torture him as he deals with the new supernatural abilities he has been given from Hell.

The series is layered with multiple characters, multiple plot points, and several different perspectives. Al Simmons is an Anti-Hero and does a lot of terrible things to meet his goals and while he is a superhero he is not your typical one and falls in line with a near supernatural version of The Punisher. That is an oversimplification to say the least and this animated series really did a lot to flesh out the character in multiple ways. While the comics were quite great and visually striking this show was the quintessential version of his story to a lot of people. The execution was excellent and the writing was well handled. There was a lot of care and emotion given to the characters and the talented writers did their best to inject each scene with some layers to the overarching narrative. It is even more impressive on multiple viewings of the episodes because adapting one of the most popular characters of the time in a different medium must have been extremely difficult. The expectation to live up to the character must have been a challenge, but this series went above and beyond its source material to deliver a hard hitting adult drama that just so happened to have supernatural action in it.

The tone of the series was consistently dark with moments of levity presented very often in the dry wit of the dialogue from many of the characters. Even the characters of Sam and Twitch from the comics simultaneously work as genuine characters and comedic relief. The writers brought life into this adaptation and it’s still impressive to this day.

An animated show can live and die by its artistry. With a character as visually interesting as Spawn it could have been easy to find a way to stumble. Adapting his moving cape and style could be a major challenge, but the series beautifully handled it with a distinct style that stood apart from most animation of the time in addition to the talented actors brought in to bring life to many of these emotionally complex and interesting characters. The show is lovingly crafted  in many ways, the first of which being in the animation.

It was a show that used its animation to the fullest extent that it had available. While it was apparent that it may not have been the most well budgeted show, it used a lot of what was available to tell interesting stories and to focus so heavily on the style. HBO allowed them to go as dark as need be and for style to shift to fit the mood of the certain sequences and episodes. Some of the sequences are shown to be in the middle of day and the animation often reflected a dream-like quality against the harsh, dark, and grimy alley ways in which the series often took place. It even has an intentional shift in design when comparing a majority of the human characters to that of the focal point being Spawn and the other demons that make their presence known. It’s quite a unique series in the regard that it has so many normally competing character designs yet somehow it all fits together to create something darkly beautiful. It’s a testament to what could be done if HBO was willing to stick with making animated programs for adults. They really could push the boundaries and do things that even Adult Swim isn’t doing on their programming block.

In addition to the unique animation we also have an incredible wealth of talent in the voice acting department. The series had multiple characters and unlike a lot of animation in general the voice acting isn’t over the top. The sinister characters are almost subtle in their sinister and creepy delivery of their lines . This is felt mostly with the character Violator played by Michael Nicolosi when he appears in his clown body. His biting sense of humor underlying with rage and evil really sells that this character is a demonic force that so happens to just be using a human vessel. While the Violator is a great villain at the center of the cast we have Keith David as Spawn. His powerful and very deep voice brings so much weight to every line of dialogue he utters. He doesn’t speak all the time, but every time he does it makes you want to listen to what he has to say. That voice embodies the character and it would be hard pressed to find someone who can bring that level of quality and life to that character again. It is why when adding Spawn for the new Mortal Kombat game they had David return to voice him. David is one of those extremely talented and versatile actors that brings so much to any project he is attached to and his performance is iconic. In addition to him in the later season they even add Mng-Na Wen to the mix and without spoiling she plays a very pivotal and powerful role that is aided by her natural talents as an actress.

The cast in addition to the layers and care put into the artistry and the execution is probably one of the most talked about and adored aspects of this series, but it’s not all that it has going for it. The iconic acting and visual style isn’t the only reason why it works as well as it does. It also comes down to the maturity of the narrative in multiple facets.

I’ve discussed previously my own desire for animation that is not only centered for adults, but also challenges the audience to deal with harsher and mature themes that can make you think. I feel that while Spawn may be a supernatural superhero story it  also deals with so many topics and perspectives wrapped up into an interesting and intense crime drama.

HBO is often a place where creative visionaries get to tell interesting and unrestrained stories without the oversight of limiting the content. Spawn is one of those shows that got to take full advantage of its network pushing the boundaries of Western Animation with its content, but it also expected the audience to buy into its themes. One of the themes that clearly resonated was the disdain shown for the Government’s shady tactics and violence across the World. Simmons is a character being punished for doing unspeakable things without question and his journey is understanding that everything he did under the thumb of the Government was a lie based upon greed. The series’ themes often revolve around political intrigue set against the harsh reality of living in a more realistic setting. It feels very much created with a disdain for the United States in a lot of ways, which is more poignant given Al Simmons is a black man in a system built specifically for white men. It feels like this is very intentional given that’s more heavily addressed in the comics. The darker themes and villains often don’t come from the supernatural, but the perverse evil of human individuals. The overarching villains may be the demonic forces, but the main villains of each season are human characters that abuse and use everyone around them to take advantage and get what they want.

It is an incredibly bleak show that juggles being entertaining while giving the audience characters and instances that feel like they come from the Real world, which is often where the true evil lies. There are quite a lot of conversations centered around finding redemption even when Simmons is at the point where he wants to give up on everything. A redemption narrative has been tackled many times before, but its unique blend of the supernatural with the very real gives it something that hasn’t really been seen before. It certainly hadn’t been seen in an adult animated project quite like this before. This show could have very easily been exploitative in its presentation and leaned into the action, but instead it took the time to tell a complex narrative with layers that touched on themes of race, poverty, and political dealings that oftentimes live-action properties struggle with telling. The themes are such a huge component to why this show works as well as it does and it is worthy of deeper exploration based upon one’s own perspectives and understanding of the World.

Todd McFarlane’s Spawn is easily one of the best comic adaptations of all time. It was a show that had the backing of HBO and was more than willing to go into darker territories and tell a complicated story using such a very popular character, which is in and of itself  impressive. This show has had a lasting impression and deserves to be recognized for its sheer brilliance in execution and for its serious tone compared to most Western Adult animation. It is a modern Cult Classic that has rightfully gained a following over the years. I highly recommend that if you have yet to see this to give it a chance since it is available to stream on HBO’s platforms. I don’t think you will be disappointed especially if you want to see one of the most quintessential portrayals of this character.