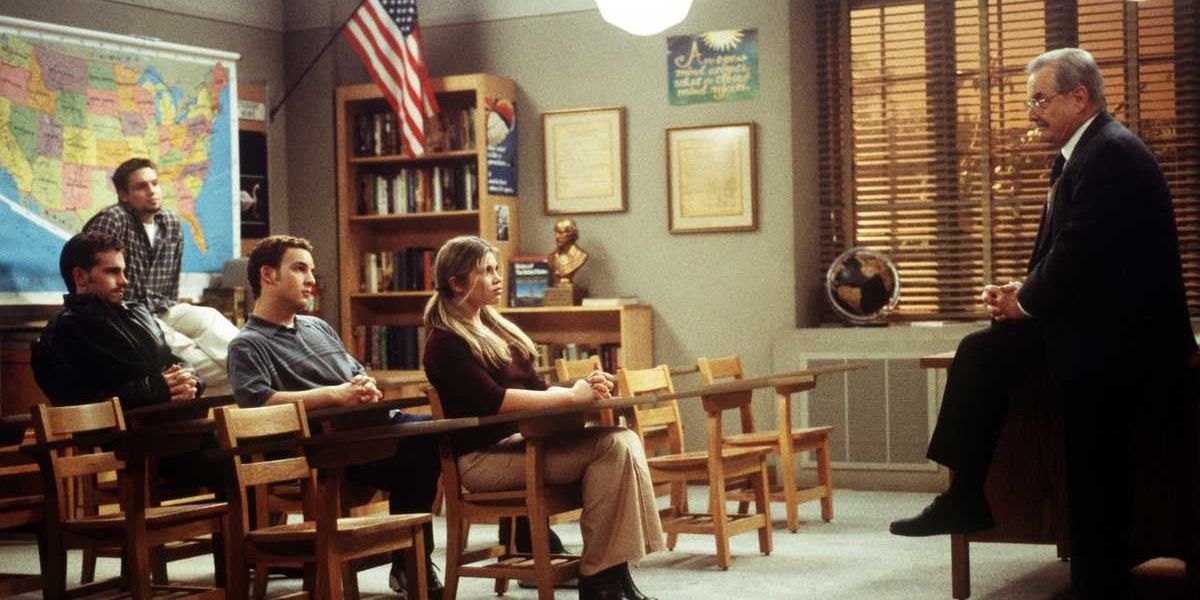 “Believe in yourselves, dream, try… Do good” the final lesson of Mr. Feeny to the cast of Boy Meets World echoes across a decade as the punctuation of what has become one of the most beloved sitcoms from the 90s. The show spent 7 seasons following Cory, Eric, Shawn, and Topanga as they struggled to be prepared for the difficult, real world. What makes this show so special though, aside from the outstanding performances and character dynamics, or the fantastic writing that handled difficult topics like alcoholism, domestic abuse, and cults, the thing that made it special was that the vehicle of this journey was the endless process of education, a process guided by one of the greatest teacher characters in any medium ever: George Feeny.

It’s interesting that Feeny not only so eloquently punctuates the series with his iconic closing line, but even early on in the series Mr Feeny explains the process of education that is the main theme of the entire show.

You see Mr Matthews, education is not about obscure facts or little test scores. It is the overall effect of years of slow absorption, concepts, philosophies, approaches to problem solving, the whole process so grand and all encompassing that it really can’t be threatened by the occasional late-night no hitter.

Now during this particular episode, Cory had done poorly on a test because his father had woken him up past bedtime to watch a baseball game together since their plans for the day got canned. While this particular line is in reference to this singular incident, it is the core foundation of Boy Meets World. The pursuit of education is ongoing, it never stops. But at the end of the day, it is equally important to spend time and appreciate the people we love so that we never lose sight of the things that motivate us to continue that growth.

When you are watching Boy Meets World during the first season it’s obvious that the protagonist is supposed to be Cory, but by the series conclusion, each character has had so much focus that it’s really hard to pinpoint who the series is named for. While Cory never drops back from a prominent lead, the show comes to focus on the struggles of all these characters as they meet the world. This leads back to the very theme previously discussed, about the process of education. It never ends, you never stop learning and it doesn’t have to be information absorbed from a textbook, and the guru at the center of this growth for all is Mr. Feeny.

Mr. Feeny, in my opinion, is the best television teacher we’ve seen. Throughout 7 seasons of television his sole goal has been the pursuit of growth and education from his dedicated work as a teacher, to his passion at home as a gardener. Life is the core to Mr Feeny. He has seen the best of it and the worst and it doesn’t matter who the student may be in the episode, whether its Cory, Shawn or Eric struggling with their role at school, or whethter it’s Alan and Amy having struggles accepting their current standings in life. George Feeny is all about shining the light of knowledge, or even just the comfort of empathy that allows for people to look forward and grow.

At the end of the day growth is the center of Boy Meets World. It’s the story about learning the lessons needed to face the challenges of the world, but not only to meet those challenges and overcome them but to use those experiences to continue to foster that growth in the next generation. That through consistent personal growth via education, that maybe we can come to understand one another and make a brighter tomorrow. With everything currently going on in the world, I feel that this show, more than ever is important to watch. Boy Meets World and it’s lesser spin-off Girl Meets World are both available on Disney + and if you have never given the series a watch, I urge you to do so now. I would like to close up with yet another brilliant life lesson from Mr. Feeny:

It is not enough to leave school and just desire to succeed in this cold, cruel world because then you simply become a part of it. You must also have the desire to change it

Why America, and the World, needs Superheroes now more than ever
Adapt or Die: Assuring Quality of the Mainline Industry of Comics Moving Forward