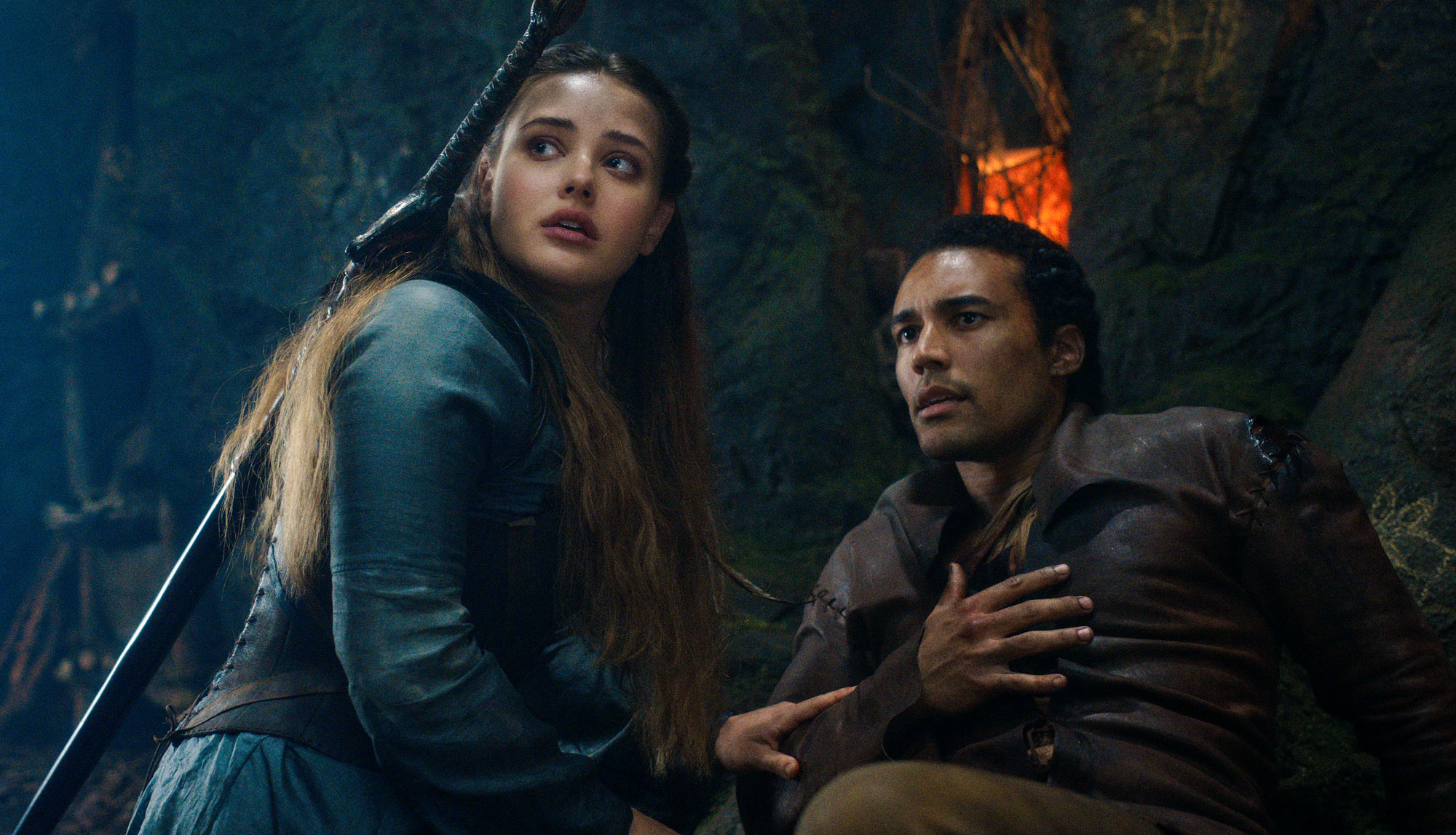 I remember the first time I read a book about King Arthur, namely because it was a big deal as it was the first book that I by and large read completely on my own. Howard Pyle’s King Arthur and his Knights sparked an enduring love for Arthurian lore that I carry on to this day. So when Netflixed announced that they were going to do a live action fantasy series that was inspired by Arthurian lore, they caught my attention. However, then it was revealed that the story would be about Nimue, a character that is integral to the Arthurian myth but so very frequently is overlooked and not shown in any of the adaptations you will see on Arthur, and I was excited. Did I like they were effectively having Nimue take Arthur’s spotlight, not especially, but with a drout in love for the Arthurian myth in mass media, I was still optimistic and interested. Now that I have finished the series, it’s difficult to string together the thoughts because on the one hand, I had a solid time watching the show, but on the other hand the boy who made his first email account lancelot26 for his love of these stories wanted to slam my head against the wall repeatedly for subjecting him to this. So without further ado, lets talk about Netflix’s new original series: Cursed.

Because I have had a tendancy of being really angry and disappointed with things lately, I want to start off by talking about the things that I felt made this a very competent show. I want to stress that the show is not a slam dunk by any stretch, but it’s enjoyable and there are some things the show does very well. Probably the chief thing that this show handles well is the design. Even though it can never make up what freaking time period it wants to be, the design aspect of the show is beautiful. I don’t think there is anyone that could argue that.

The writing is passable. The pilot is a really rough start with lots of poor pacing and jarring dialogue, but for the rest of the show these elements improve and are amplified by very strong performances. It’s hard not to get invested in the protagonist. The Weeping Monk is a fantastic antagonist with one of the coolest villain introductions I’ve seen in a long while in the fantasy genre, and even though the reveal of who he was I felt was lazy, I still greatly enjoyed him as an antagonist. However, this is where the positives for me end.

All the issues I have with this show can be traced back to one recurring problem: a lack of reverence to the material from which it draws inspiration. I am going to break this down into three categories: 1st is the wasted potential of character narratives, 2nd is a confusion of setting and point of the Arthurian myth, and last is the, at times, blatant character assassination.

The first thing that drew me to this series was its focus on Nimue, a character so integral to the Arthurian myth and yet so often underutilized and overlooked. It’s something that has always confused me because while Merlin was a prevalent part of Arthur’s story as his advisor, it was Nimue, NOT Merlin who bestows Excalibur to the boy king. So when the concept was introduced to do a series focused on Nimue, I was intrigued because it gave me hope that maybe, just maybe, we would finally get focus on the characters of Arthurian myth that have never gotten their proper chance to shine. By focusing on these smaller characters, you could really allow for a reinvention of the myth, however, this is not done. It becomes a lazy beat for beat of things that have been done before by far superior shows like Merlin or Camelot.

The show instead chooses to focus on the prominenent characters like Arthur, Gawain, and Lancelot because that’s what people expect. But by making this decision and doing this, you really miss a fantastici opportunity to reforge this myth. Instead of having Arthur be a lead support character and the love interest to Nimue, have it be Sir Pelleas the Gentle knight, who ACTUALLY becomes Nimue’s husband in th book. Instead of using characters like Lancelot and Gawain, have the brother knights Balin and Balan le Savage (Balin is the knight that kills Nimue in legend) or even the famed Black Knight, King Pellinore. Instead of having some weird Viking knock offs, you could instead have barbaric hords of Scotts, or Anglo Saxon invaders led by characters like King Lot of Orkney. However, it’s clear that the people who wrote this story weren’t concerned with the meat of these stories and that can be even further displayed by the lack of commitment to a setting.

Now when I say setting I don’t mean the where part of the setting so much as the when. Now don’t get me wrong, Arthurian lore is this very ambiguous time period. The reason for this is that the legend of Arthur is a mixture of several legends rolled into one. Arthur is based on several individuals stretching back to the fall of the Roman Empire. The Roman General Artorius (who commanded one of the last Roman garrisons on Hadrians wall in the wake of the Scottish invasion) is the origin of these myths, but those myths were built on by Welsh warlords who staved off the invasions of Anglosaxon hordes during the dark ages before the fall of the Britons and rise of an Anglican England. As such there is a massive period of time in which you can set this story, but you need to COMMIT. The show goes back and forth in its presentation, and sometimes feels like late dark ages or early renaissance, but at other times is meant to feel like the period right after the fall of Rome. Common clothing feels renaissance era, where armors feel like a mixture between dark ages and renaissnace. However, it’s hard to commit to anything when you completely miss the entire point of Arthurian myth.

As I said, Arthurian Myth is a collection of stories based on the exploits of the Roman general Artorius, and various Welsh warlords throughout the dark Ages that stood against the Anglo Saxons. Do you want to know the one thing that ties them together? The theme of unifying under one banner to stand against a greater enemy, which lead to a time of relative peace because of that unity. Nimue tries to take the unlikely person coming to the throne trope without understanding the core essence of what drives that story. Before Arthur pulls the sword from the stone (which is NOT Excalibur, oh by the way) the tribes of the Britons are at eachother’s throats due to the power vacuum left by the death of Uther Pendragon, who had conquered various kingdoms and brought them together under HIS banner (sound familar). Arthur pulling the sword from the stone is meant to be an omen of hope for unity, order springing from the chaos that had been left in the wake of Uther’s death. However, Nimue becoming the holder of “the sword of the first kings,” this show’s Excalibur, creates more chaos. The themes of the show are those of fighting persecution and genocide. Themes that are intrinsically NOT part of Arthurian myth. I understand artistic license, and that this is the creator’s right, but it’s hard to accept an adaptation that so greatly misses the point. Which leads me back to character in just how poorly these characters were treated.

Getting through the first few episodes of this show was PAINFUL to me and a lot of that is just how poorly characters were treated. Uther being reduced to a petulant manchild, Arthur being practically the same age and having no relation to Uther whatsoever as well as having a very mixed moral compass, and that’s before I can even touch the very forced diversity for a setting that is supposed to be a Dark Ages setting of England when the Britons had regained control and dominance of the Island (not a lot of ethnic diversity in a celtic tribe whose last heirs make up for 7 percent of Englands population). But of all the characters treated poorly in this show, none was more grotesque than the treatment of Sir Ector a man whose story served as a likely inspiration for characters like John Kent in the Superman story.

In the original story of Arthur, Merlin spirits Arthur away from Uther and Igraine and brings him to a knight named Sir Ector. Ector was a respected knight for certain, but he was also not too far removed from the working class. He didn’t own a great deal of land and namely made his coin off hard work in the field either by the sword or the plow. The whole point was so that Arthur would be raised in an environment where he would have to earn his way, and not be spoiled rotten. Effectively it was to provide Arthur with perspective and a moral center that valued the merit of character and hard work (sound familiar). So to see Ector be turned into a stodgy old white dude who is so blinded by his notions of honor that he spits on family and treats everyone like shit was like watching John Kent tell a 13 year old Clark Kent that he should have let the bus full of kids drown.

At the end of the day Cursed is a show that an audience member unfamiliar with Arthurian lore will enjoy. It has great performances, exceptional designs, and has a strong enough sense of story telling (save for the poorly paced pilot) that it will keep the audience intrigued enough to finish the series and earn its investment. However, for those who have loved Arthurian myth, even when accepting its departure from its conventional story, this show utterly fails to live up to its potential to give spotlight to the lesser known characters of these stories that are equally fascinating as well as ruining the characters that people already know, it fails to establsih a coherent setting that makes sense, and it fails to uphold the themes that are at the core of any good story of Arthurian Lore. So the verdict on this one is if you have only a rudementary knowledge of Arthur, you will enjoy this show, if you have read any deeper into that world, you will likely walk away feeling hollow by the experience.

By Michael OdenDecember 12, 2020
To Top
%d bloggers like this:
We use cookies to ensure that we give you the best experience on our website. If you continue to use this site we will assume that you are happy with it.Ok