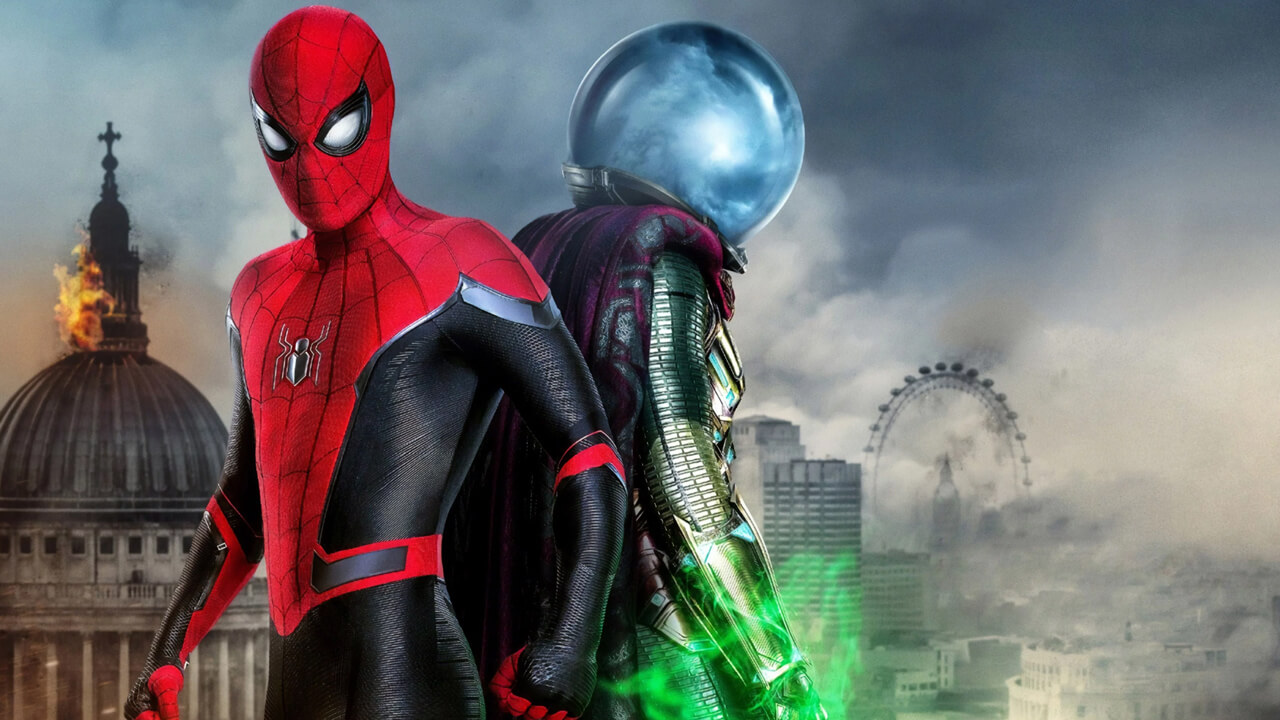 11 years of film making culminated in the cinematic finale of the Infinity Saga in Infinity War and Endgame. The two films brought full circle the stories of the MCU’s 2 most prominent leads: Tony Stark and Steve Rogers. With such a grand finale, it certainly begs to question as to how to follow it up? How do you move forward? How can you punctuate 11 years of storytelling while simultaneously establishing the legacy of MCU’s future? And on paper, the MCU’s response is perfect, the perfect film for the perfect character to analyze the consequence the events of Infinity War and Endgame established. Their response to answer this calling was none other than Spider-Man and honestly the idea couldn’t have been more perfect.

In a way Spider-Man is indicative of everything that built the Marvel brand. His return to the MCU through the partnership of Sony is probably one of the most celebrated entries of the entire MCU. As a character, the crux of Spider-Man is the weight and responsibility that comes from great power. To have that character be the one through which we see a post Endgame world, a world that mourned half of the population for 5 years and began to move on, only for that half to come back in an instant. It’s only amplified by the concept of having the villain of this film be none other than Mysterio. A character who doesn’t pose a physical challenge to Spider-Man, but a challenge of the mind and perception. Everything was there for a phenomenal film that brought a Spider-Man story to rival even the best comic stories in his almost 60 year legacy. While what we got was an undeniably great film from an objective standpoint, I can’t help but feel hollow in the fact that it also feels like the epitome of a half measure.

Infinity War established something that I feel is often absent from most superhero films: Lasting Consequence. The Avengers failed, and the world had to live with the consequence of that failure for FIVE YEARS. Peter Parker died in Tony Starks arms, we got to see the horror on Tony’s face as he watches a child die in his arms, and what’s more is that its his own fault. However, what about the people back at home? what of their reaction to discovering that Peter Parker was no more? At the end of Homecoming we see Aunt May discover that Peter is Spidey and freaks out before she’s cut off by the credits. What a fantastic set up for the beginning of your next outting right? Having that moment be right around the time Peter goes on the field trip that leads to his part in Infinity War.

You’d think the answer on where to go from there was written all the wall: May and Peter fight about him being Spidey, Peter gets her to reluctantly see his viewpoint, he goes on the bus, and then all of a sudden half the world disappears, but May is still there, waiting and praying for her son to come home. Then Tony comes to the door, and there is a moment of hope. That moment is short lived as she sees the look on Tony’s face and has to come to terms with the fact that Peter Parker is gone. Then 5 years go by, and Peter comes home and now Aunt May gets a second chance at being a mother. This is what should have been, but instead May never felt that loss. She was snapped away along with every other member of Peter’s supporting cast from Homecoming, and frankly it’s an enormous waste. But that’s only the beginning of the problem and it extends to a lot of the supporting cast as well. The weight of the snap and the blip feels like it’s inconsequential and that’s honestly a travesty. However, as disappointing as that loss is, the greatest problem I have with this film was the overall treatment of Peter Parker.

As previously noted the core of Peter’s character philosophy is the responsibility that comes with the ability to act and do something. It’s core to who he is as a character and Far From Home spends all its time trying to forget that character and instead make a highschool teen movie that plays on 80s nostalgia. From a character standpoint, Peter’s journey in the film should be all about the process of coming to terms with guilt, feelings of inadequacy. If you watch the scene in Infinity War where they almost stop Thanos on Titan, it was Spider-Man who almost had the glove off. Spider-Man almost saved the universe, but almost only counts in horse shoes and hand grenades. Peter failed, and as a result (mind you from his character perspective) the lives of half the universe, of Tony Stark, Natasha Romanov, and so many others all rest on his shoulders. What an immense burden, and something so in character for Spidey to shoulder! While the film does play with this idea (in easily THE BEST scene of the film with the first fight between Mysterio and Spider-Man), it is never fully embraced. However, all of this stems from possibly the greatest problem with the film in the persistent agenda to make Spider-Man something that he’s not: the successor to Iron Man.

It almost feels irreverant to me, to reduce Peter to the “Next Iron Man,” when he can be so much more as the Spider-Man. This film is constantly drawing the comparison between Peter and Tony, and it’s not a fair comparison because Peter Parker is and always has been a better character than Tony Stark. Spider-Man has been hailed as Marvel’s crowning achievement and their largest IP since his creation. So to strip the core foundation of Spider-Man away to insert Tony Stark and double down on it seems just disrespectful because the truth of the matter is that one of the things this film desperately need was Uncle Ben.

While I personally felt that Homecoming handled the themes of responsibility well, and did so in a way that had Tony play as a new role model for Peter, the weight of Ben was still felt in the movie. In this film, in a moment where Peter is so conflicted an vulnerable, what better time to showcase this presence in force. You don’t even need to hire a physical actor to play a part. You just need scenes of Peter visiting the gravesight of his Uncle, that he feels lost and could use the clarity his Uncle used to provide for guidance. Small scenes like this are what make GREAT Spider-Man stories. One of my favorite Spider-Man stories of all time is Spider-Man: Blue which is all about Peter recording an audio journal about how he fell in love with Gwen Stacy to leave at the George Washington bridge upon the anniversary of her death. Personal moments like this that acknowledge the humanity of the character are what drive a Spider-Man story. On the other hand Far From Home does everything it can to leave those themes behind and focus on Peter’s relationship with a character that, despite their chemistry on screen, does not feel even remotely earned. Peter Parker isn’t interesting because he’s a highschooler and does highschool things, he’s interesting because of his humanity.

Spider-Man: Far From Home is an objectively great film, it has some fantastic writing and the way they handled Mysterio was complex and interesting. However, it pales in comparison to what it could have been. It feels like a half measure to punctuate one of the greatest cinematic journeys in history, and no matter how great the movie may be, it will never not feel like this in my eyes.

Why ‘She-Ra And The Princesses Of Power’ Exceeds Where Other Reboots Fail
Conflicted: My Review of Netflix’s Arthurian Drama ‘Cursed’