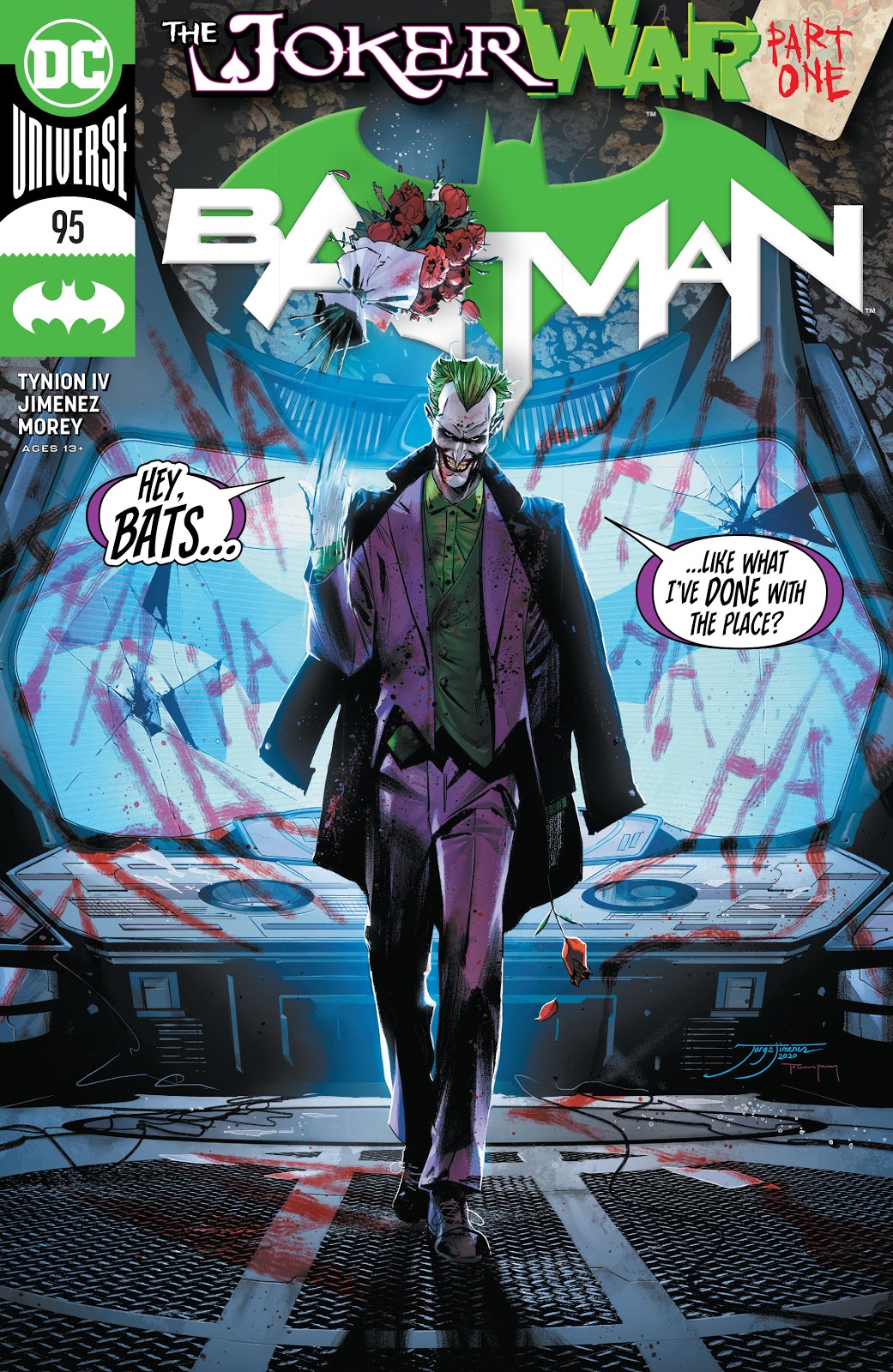 The last year has seen Batman experience a number of things. He was left for dead by his alternate-timelone father, lost his city to Bane, lost his Butler and father figure Alfred, and dealt with a old plot by his villains to take over the city. But the real threat had been lying in wait all along, with the Joker now unleashing his plan that’s he’s been working on for years. Stripped of his wealth and access to Wayne Enterprises and all the gadgets that Lucius Fox was building for him, Batman is on the verge of losing his vision for Gotham City. But, Batman is reinvigorated by an idea to become a better, brighter Dark Knight—one that is driven to make his city a better place permanently. Knowing full well that this is Joker’s most diabolical plot, Batman will ensure his greatest trial as guardian of his city and will have to fight for the fate of everything’s he’s worked for.

As we pick up after a flashback with Alfred, Batman is careening through Gotham trying to sort out his next move. With Joker having full control over Wayne Enterprises, Batman is going to have to get his plan together quickly, as the more time passes the more Joker solidifies his nefarious plot. News stations are all reporting on the false claims of embezzlement and working Joker’s propaganda as he planned. Meanwhile, at Wayne Enterprises, Lucius Fox is being forced by mind control devices to give up all of his and Batman’s arsenal over to Punchline, Joker’s new girlfriend who at this point has proven herself to be deranged and extremely dangerous. Punchline then mentions that Joker is spending his newfound wealth on some “shopping.”

Looking to buy the very place that Bruce Wayne was at the night his parents died, Joker seems to be going for the root of his reasoning to become Batman. He interacts with a elderly man, feeling reminiscent of the scene in Killing Joke where Joker buys the abandoned amusement park before killing the man. He doesn’t kill this one however, and explains he’s getting a film out of the attic, one that’s particularly important to Bruce Wayne’s childhood: The Mark of Zorro.

Elsewhere, Batman follows one of Joker’s henchman and personal representative/lawyer, The UnderBroker, to find out where Joker could be, stumbling upon them speaking of their hostile takeover of Wayne Enterprises along with Joker’s request to purchase every single movie theater in the city from big theater chains to art houses. Batman decides to go to one of his secret hideouts he and Lucius built within the Wayne building. However, he’s greeted by an unwelcome guest, Punchline, who was aware of the hideout after having Lucius reveal the layouts to them all.

Fighting viciously, Punchline mentions how she discovered Bagman’s newest suit, made by Lucius and one that he hadn’t revealed to Batman himself. Remarking on the more brighter toned suit and commenting how Batman hasn’t earned the right to wear it because he hasn’t done enough to do so, Batman feels off and she points out she’s filled the room with a new gas mixed with Joker toxin, Scarecrows fear gas and a tiny bit of Bane’s Venom. It’s apparent that Punchline here and also from her origin story, that she’s gifted at creating gaseous concoctions, given how she also mentions that she’s built her immunities up to it over the last year. Hearing the voice of Alfred, Batman’s looks up and sees one of his Batplanes painted with a smile, take aim and open fire for a cliffhanger end.

As always, Jorge Jimenez’s art is downright gorgeous, really making the issue feel like a blockbuster movie. Teamed up with Tomeu Morey’s coloring and we have a team that’s obviously working hand in hand with each other. Tynion has proven himself to really understand Batman and even do well at picking up where Tom King left off to take what happened in City of Bane and continue on from there. It’s exciting to see a huge Joker storyline in the main Batman title, not having one since the Prequel story “War of Jokes and Riddles”. Excited to see where this goes and how Batman is able to pull himself together for the betterment of his city.