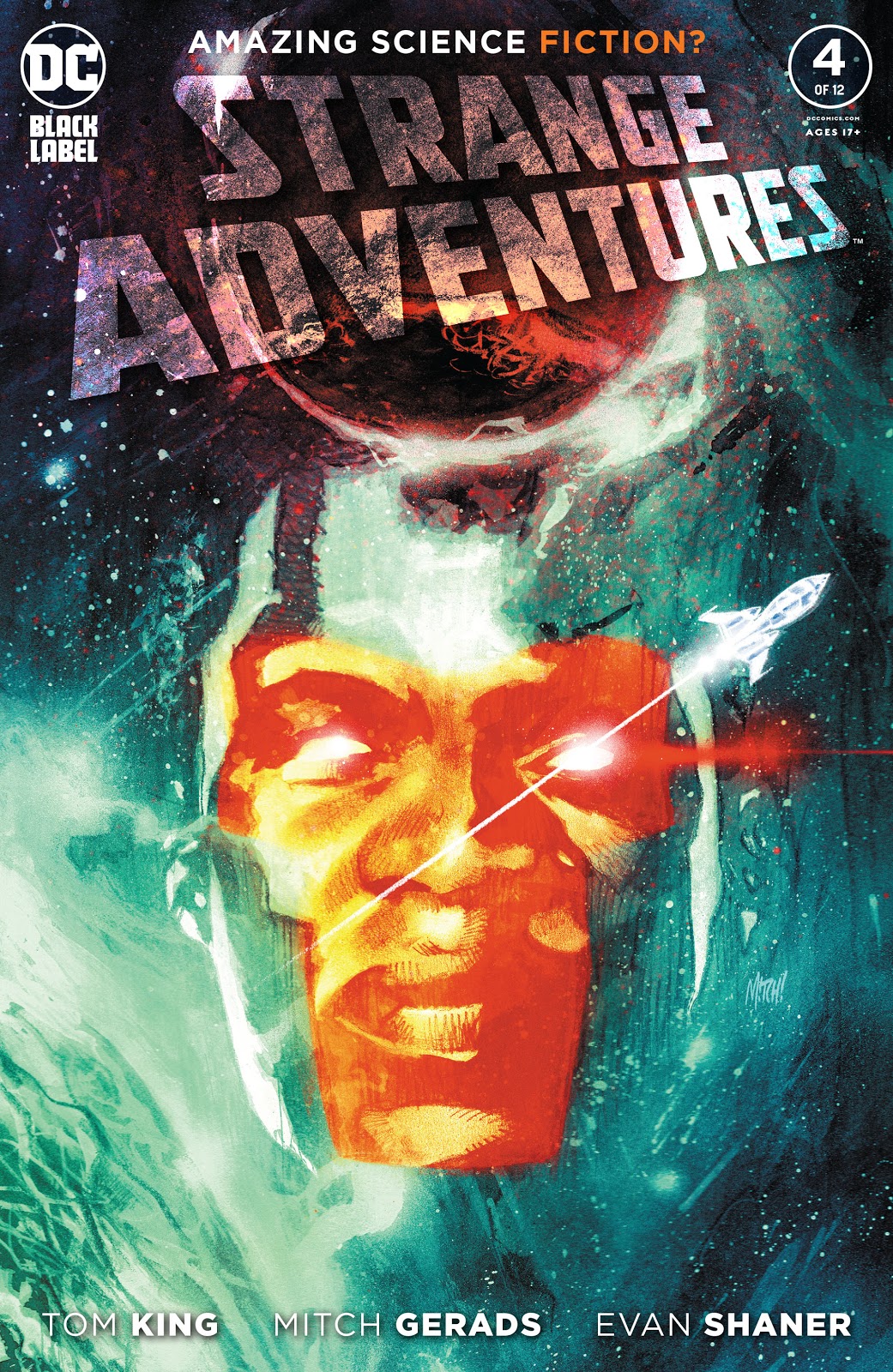 Things seem to be getting “stranger” for the investigation into Adam Stranger’s possible involvement with the murder of an accuser, one who accused Adam of committing war crimes during his defense of Rann from the Pykkt. Fear not dear reader, for Mr. Terrific is going to get to the bottom of the mystery, but it might rile up some feathers in the process. Strap in adventurer, we’re here to dissect what’s going on in the story and what went down in this month’s STRANGE ADVENTURES!

Spoilers from here on out!

So we pick up with the flashback that’s been playing out so far, this time we see Adam leading the Hellotaat after he won their favor in the combat ceremony last issue. As always, Shaner’s art is beautiful and gives a sense of a nostalgic past that looks bright as opposed to the gritty present Gerads brings to his work. In the midst of Adam leadind the Hellotaat into battle, the Zeta Beam begins to wear off and he’s yanked back to Earth.

Back in the present, Mr. Terrific is landing on Rann to continue his investigation. Being given access to the Rannian records would allow him to obtain info that he couldn’t get on Earth, but immediately is brought to suspicion when Adam’s father in-law, Sardath, who was supposed to meet him, has instead sent his assistant. He’s also told that certain files are off limits since it’s written in the Pykkt language. It would seem that the Rannians have something to hide and being the third smartest man on Earth, Terrific is aware of it.

On Earth, Adam meets up with Hal Jordan and the two grab a beer to talk about the investigation. Adam demands that the Guardians intervene and stop the Pykkts from destroying Damn, but Hal says they have deemed it to be their business and cannot interfere with Galactic qualms that don’t impact the rest of the Universe, that interfering could cause more bad than good. Furious that his friend would refuse to help, Adam lashes out and feels betrayed. The tension of it all is beginning to wear down on Adam, the story so far feels like a claustrophobic box slowly growing smaller around Adam as he feels everyone around him refuses to give him the benefit of the doubt.

On Rann, Mr. Terrific finishs with the archives, and wishes to see the Pykkt records. However, as he was told earlier by Sardath over comms, they have never been able to decipher Pykkt writings as any they try to capture commits suicide and therefore they locked away those records since they can’t even translate them. Terrific offers to do, as he claims to have learned Pykkt on his trip to Rann (a good way to pass time on a 25 trillion mile trip). When told that’s impossible, Terrific replies to what seems to be fluent Pykkt and demands to see the Pykkt archives immediately.

We return to Earth, or specifically Earth’s Moon, and Adam is venting his frustration to a person who can truly be fair in any and all aspects of life, Superman. They’re fighting a scout of Mongul, who is preparing to attack Earth, while Adam angrily says that it’s going to be another week before a Zeta Beam takes him back to Rann and that people there are dying. Superman counsels him to be patient but Adam states that the more time goes by, the bigger the Pykkt threat grows. He asks Superman to help him get home, but Superman states that Mongul will be there soon and he needs to protect Earth. Tough decisions need to be made when it comes to being a hero and Superman knows best of all that sometimes it means people dying while you make your choice. Fed up with no one giving a helping hand, Adam punches Superman to no avail only to break his hand.

Terrific is awakened by Rannian police, stating he’s violated their laws by accessing off limits information about the Pykkt. Not the one for games, Terrific has his T-Spheres take out the police and then gets dressed to turn himself in. Upon arrival, Sardath exclaims that he’s violated not only their laws, but their trust as well and that Terrific must leave Rann. Terrific tells him that he’s aware of how Rann controls information, how that the archives he was allowed to see was currated propaganda to make Rann look better. He turns asks Sardath about his dead granddaughter, who Terrific thinks isn’t actually dead. Sardath strikes him across the face and Terrific returns the favor. Fair Play means Fair Play.

Flashing back to after Adam was taken off Rann, he awaits his next Zeta Beam and arrives on the battlefield he was taken off, only to see the Hellotaat he led all dead and half decomposed. He regrets leaving the battle and the lives lost over it, but his wife Alaana is there to greet him, and to bring him to where the remaining Hellotaat are camped at. He promises to save her world and to stop the Pykkts, while in the present, Alaana has broken into Terrific’s house and greets him when he arrives home. She tells him that his investigation is over due his breaking if Rann laws and striking her father and how on Earth doubt has been raised as to his methods into investigating Adam. It would seem by this end, that Alaana is more involved that she would appear to be.

Altogether, the story is moving rather slow but being only four issues in out of 12 could excuse the page. Tom King is known for starting his stories slow and building up tension and suspense, especially when it seems that Adam and Alaana’s daughter, Aleena, isn’t dead as they say she is and how Alaana seems to be pulling strings behind Adam’s back. The art however, is absolutely gorgeous to look at, and every issue ends with a full page blow out of one of the interiors panels with a quote from the issue on it. Seemingly, as if those are tiny hints to what’s the theme of the story, how you can’t really trust people when it comes to their livelihood and how there’s always going to be trouble when someone thinks they need to save someone. That’s my opinion, but let us know in the comments what you think about this story so far.