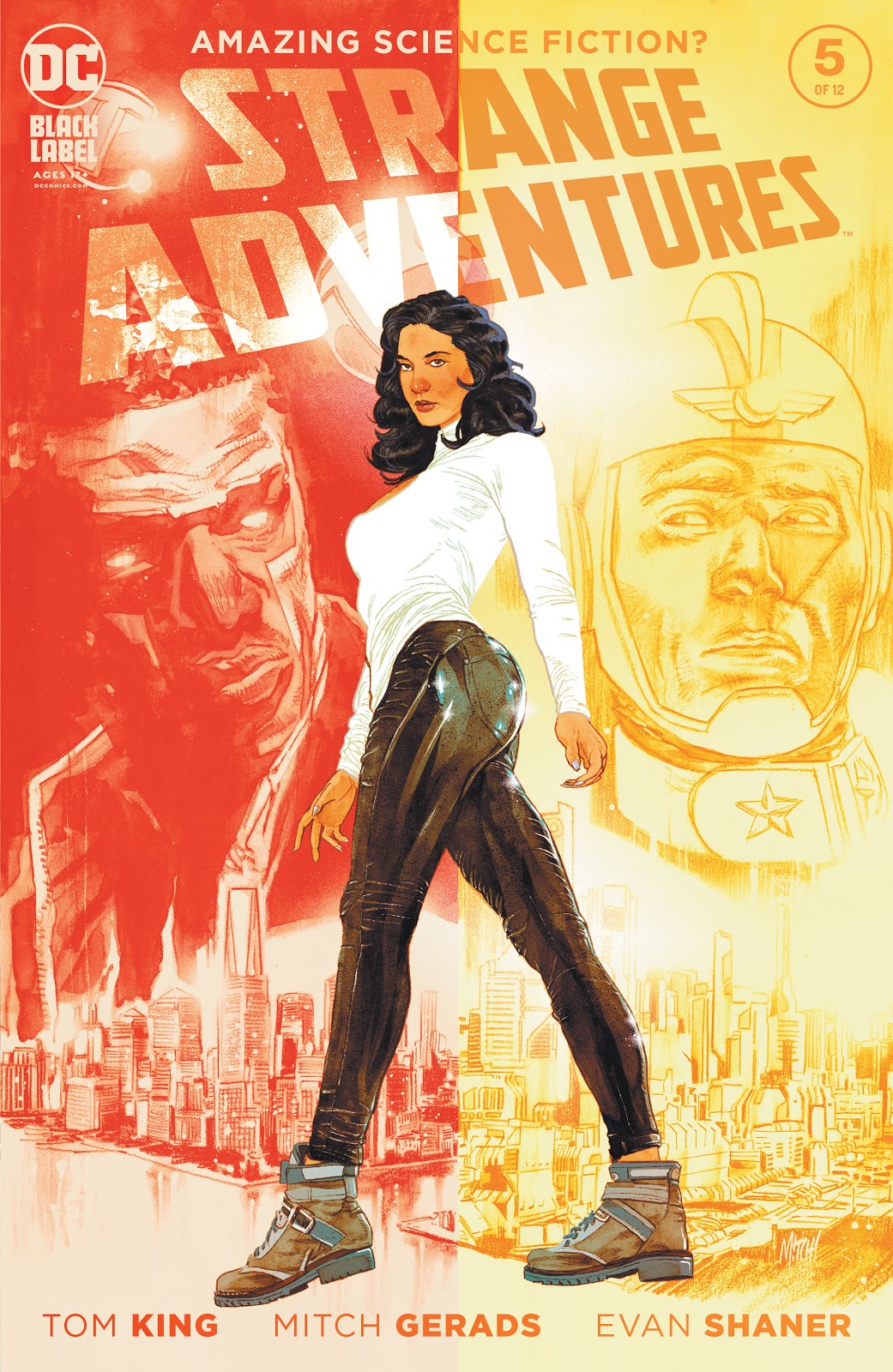 When we left off last issue, Adam’s wife Alaana was giving Mr Terrific a warning, that he’s riling up the wrong people in his investigation into Adam’s alleged murder. Now we pick up a little before that interaction, seeing that Alaana may have another motive behind stonewalling Terrific at any chance she gets. Let’s take a dive and see what this months STRANGE ADVENTURES leads us into, and or course…

We begin with Adam and Alaana with a Hellotaat tribe member asking for assistance in fighting the Pykkts from the underground dwellers of Rann, the Rock People. Unfortunately, the Hellotaat tribesmen feels insulted by something the Rockman had said and goes to put him in his place when he’s grabbed by the Rockman and has his neck broken. The Rockman recognizes Adam as an outworlder and Alaana as being from the Upworld as he calls the planet surface.

In the present, Adam and Alaana sunbathe whole they discuss the Justice League’s ruling that no member should make direct contact with Adam for the rest of the investigation. Adam feels like he’s being shut out from his superhero community and how it doesn’t feel like they’re treating him as if he’s innocent. Even Booster Gold called him to ask why he isn’t allowed to make contact, despite doing so. In the middle of Adam venting, Alaana reacts shockingly to news breaking out of Gotham: a battle drone from the Pykkt Empire has engaged Batman. What Adam and Alaana have tried to warn the world about is now coming true: the Pykkt are coming to Earth. Their warnings seem to make them appear more honest, despite the media trying to toss doubt on Adam’s credibility.

Flashing back to Rann, the Rockman leads Adam and Alaana to a cavern, where they must await one day for the Rockpeople’s decision as to whether or not they join the surface world in their right against the Pykkt. Adam exclaims that he’s had to be in worse caves before, but Alaana breaks the news that a day to the Rockpeople is determined by the shifts of the overhead rocks by ocean tides, and that a day for them is a month for the surface. The two gear up for a long, dark trial of their sanity. Back on Earth on the present day, Adam watches the tv as the news show footage of Batman battling the Pykkt drone and deliberate as to the threat it poses to Earth. Congress calls a hearing on how to handle the coming Pykkt invasion and has Alaana, Martian Manhunter and General Kannagher from the Earth Defense Force to discuss their methods.

Martian Manhunter delivers a hopeful speech that Earth has always been defended from threats of all sorts since the Justice League was formed. He claims that as they’ve overcome those threats, they shall overcome this too. However, Alaana calls this bullshit and how Hope isn’t going to stop the Pykkts from turning Earth to ashes. She says despite her planet being far more technologically advanced than Earth and having united the different tribes of Rann, they still barely survived the Pykkts. Afterwards, the President let’s Alaana know that not only does he agree with her reasoning, he’s giving her reigns of an all new Task Force to deal with the coming threat.

Flashing back again the cave, Adam explains how long they can survive without food and water. He finds a cave rat and zaps it with his blaster and then makes a fire to cook it over. Alaana agrees but says it’ll be difficult to live on almost nothing. She reminds Adam the last time they faced the Rockpeople, the had to work against their strengths to win. They will love, and no matter what, it will be paradise they claim once they leave this hellhole. After some time, long enough that they’re on the verge of dying of thirst, they find a water stream big enough to provide both of them enough water. Drinking the water refreshes them and they both embrace in a deeply loving manner as they know they’re gonna survive, and the two make love.

Alaana and Adam discuss their main issue back on Earth: Mr Terrific. He’s on his way back from Rann and they’re trying to figure out how to turn his investigation, which seems to be becoming a task to incriminate Adam from their point of view, into a opportunity. Alaana calms Adam and tells him she has it under control, almost alluding to an ulterior motive. Adam then attends a press conference at the White House and the Press wonders what his relationship with the Justice League is like considering the ongoing investigation, too which he says he still believes he’s on good terms with them.

A final flashback to Rann and we see that the Rock people have agreed to aid the surface world. The Rannians, Hellotaat, and Rockpeople have now all become a global alliance to tackle the Pykkt threat. Adam and Alaana show their daughter a historic day in Rannian history, as their planet has united against a greater threat they could ever manage on their own. Aleea looks on, pet frogs in hand, as the issue comes to an end.