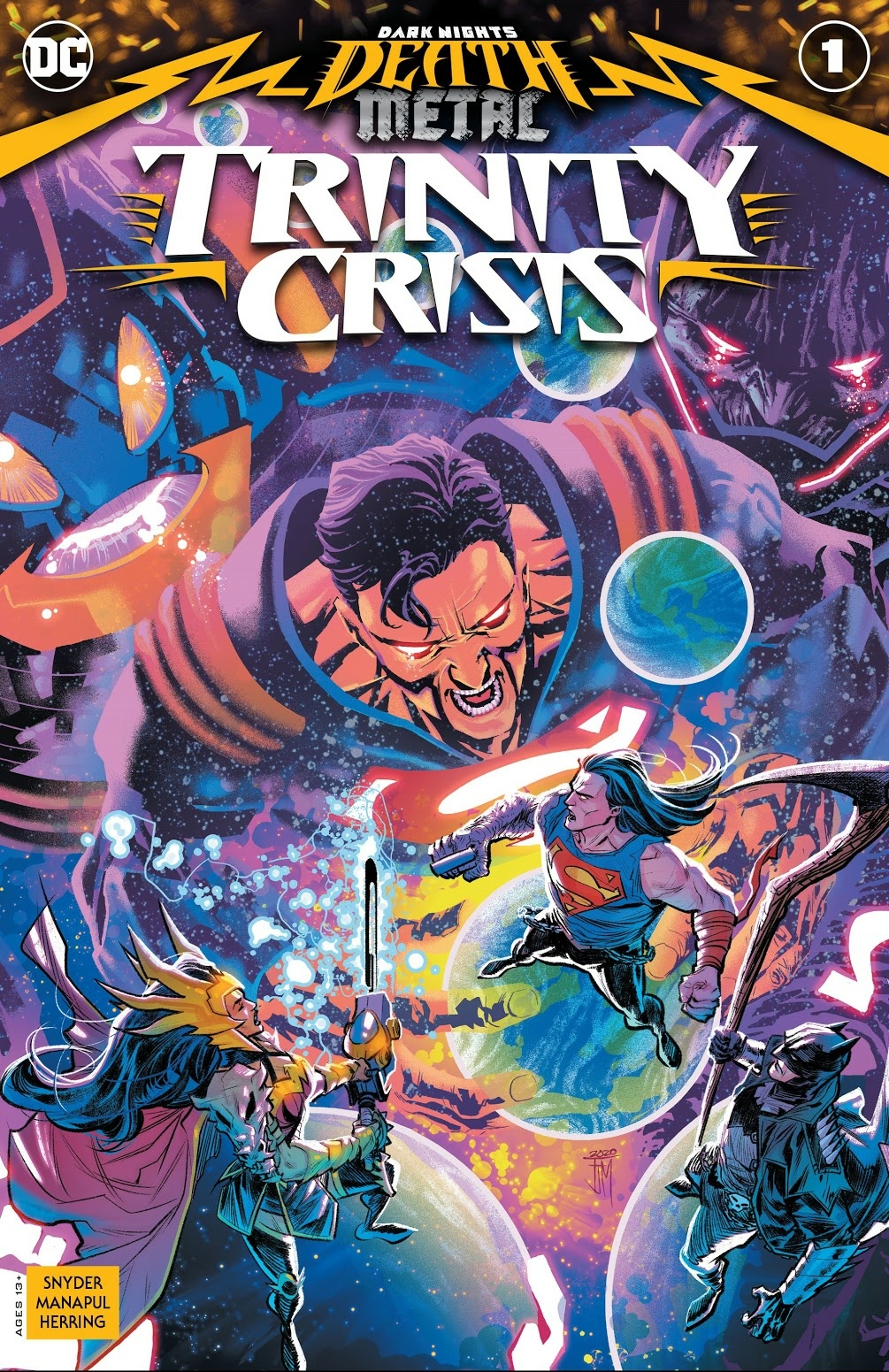 Death Metal is going a long way to fix everything that we all thought would be fixed by Doomsday Clock. But due to the delays of D-Clock, the state of the DCU was in disarray in terms of continuity and what took place when. That’s shifted a lot of the continuity fixes onto Death Metal and so far, it seems we’re in for a gigantic revamp for the Multiverse after this is all done. Where we left off, the heroes were about to commence their big plan to jumpstart the Multiverse and defeat Perpetua. The Trinity will descend into the Dark Multiverse to gather up crisis energy to use against Perpetua. Let’s see how well they did in the first major tie in for Death Metal, and as always…

Alright, a voice monologues over the comic as we see the original three Crisis events, and it explains how every Crisis was a battle for the very soul of the DCU. Everything was at stake from the relationships between Heroes to the very fabric of the Multiverse as a whole. But each time, our DC heroes succeed, paying any price it took to win.

This time however, the heroes are facing their greatest threat ever, and the Multiverse will be lost forever if they lose, replaced by the Dark Multiverse. The imagery of Crisis on Infinite Earth’s, Infinite Crisis, and Final Crisis are shown as heroes gather together to find the Evil that threatens their world’s, and we are told it is time to rectify all of that history.

Our heroes are where we left off, assembling themselves to action. The Trinity needs Jarro to mentally block anyone from seeing their plan, along with them they take Swamp Thing, Harley Quinn, and Jonah Hex. The other heroes are sent to destroy Perpetua’s throne and the antennae on the remaining World’s to hinder her power and divert her energy to, Wally when he’s ready. Meanwhile the Trinity sneaks into Castle Bat, a living castle with the soul of a Bruce Wayne. They need to obtain Crisis Energy, the source of Perpetua’s power and what she used to create the Multiverse, to destroy her.

Wonder Woman and the team move on Castle Bat, which is being guarded by an array of Batmen and booby-trapped to the brim by a particular Dark Knight we had the displeasure of seeing the past: the Grim Knight. An ally to the Batman Who Laughs during his self titled mini series, the Grim Knight is on his guard as he readies for the inevitable. Jonah Hex and Superman debate tactics when Swamp Thing points out he can get them in quietly but it would take the full power of the Green, what little there is left.

He opens up a tunnel leading underground and from there, the team walk through the tunnels and Jonah exchanges heartfelt words to Harley about what it takes to fight on a event like this and Harley gives him a kiss on the cheek, gross as it is. Suddenly, Jarro catches a glimpse in his mind of the Speedsters being chased by the Darkest Knight and how they need to move fast before he catches Wally.

Wonder Woman comes up to a dead end and asks Superman to use his X-ray to look thru into Castle Bat. However, due to the Anti-life that courses in his body, his eye backfire and shoot out heat vision instead, blowing the wall and alerting the group of Batmen on the other side, ranging from versions of Batman/Scarecrow to the dark daughter of Batman and Wonder Woman. Batman even fights his own mother in a Batman mech suit, disturbing Bruce to his core.

Eventually, the battle becomes too much and Superman asks Jarro to take over the Castle’s mind and open up an escape route. He manages to do so, only to find out they’re in the dungeon where none other than Barbatos is being kept. He explains that he only did what he was meant to, bringing the darkness to the place where all the nightmares came from. He says to them that it’s their fault these Crises keep happening, and the Dark Multiverse only grows because the people’s fears and nightmares adds to it, meaning the heroes have done nothing to quell the worries of the Multiverse.

As the Trinity begin their descent into darkness, another villain approaches, the dreaded Robin King, who contains in his belt a weapon to defeat every hero. He acts quickly as he uses The Rot in his belt to taint Swamp Thing and uses a necro bullet to dissolve Jonah Hex. Swamp Thing reacts and creates a cocoon of sorts to protect them as the Trinity dive into the portal heading into the Dark Multiverse. Side note, Robin King mentions to Harley how he doesn’t have anything for her since on his world, she figured him out quickly and almost killed him with her mallet, proving how unpredictable Harley can be. As they hold him off, the Trinity reaches the portal and make sure they’re all on the same page: picture the victory they had in this Crises and try to reach that moment to siphon off Crisis Energy into their Alfred Boxes.

As they jump in, they all hope to come out victorious with enough energy to destroy Perpetua, but as they each land in a different Crisis World, they notice something is off. Batman comes to the Crisis on Infinite Earth’s world and sees nothing but white as a slithering group of anti-matter grabs him and reveals himself to the Anti-Monitor in child form, having already won. Superman lands in the Final Crisis, with Darkseid having already enslaved all lifeforms on this world, including another Superman. Finally, Wonder Woman lands in the Infinite Crisis to find that Superboy-Prime, the narrator from the beginning of the issue, is there waiting, telling Wonder Woman this is how the crises was supposed to end: with Evil winning.

A very insane and jam packed tie-in issue, it’s sure to lead to bigger and crazier things further down this event. Hopefully the heroes don’t sacrifice too much as they’re already on the verge of losing everything. Stay tuned for more recaps into Death Metal and other comics here at UpYourGeek.