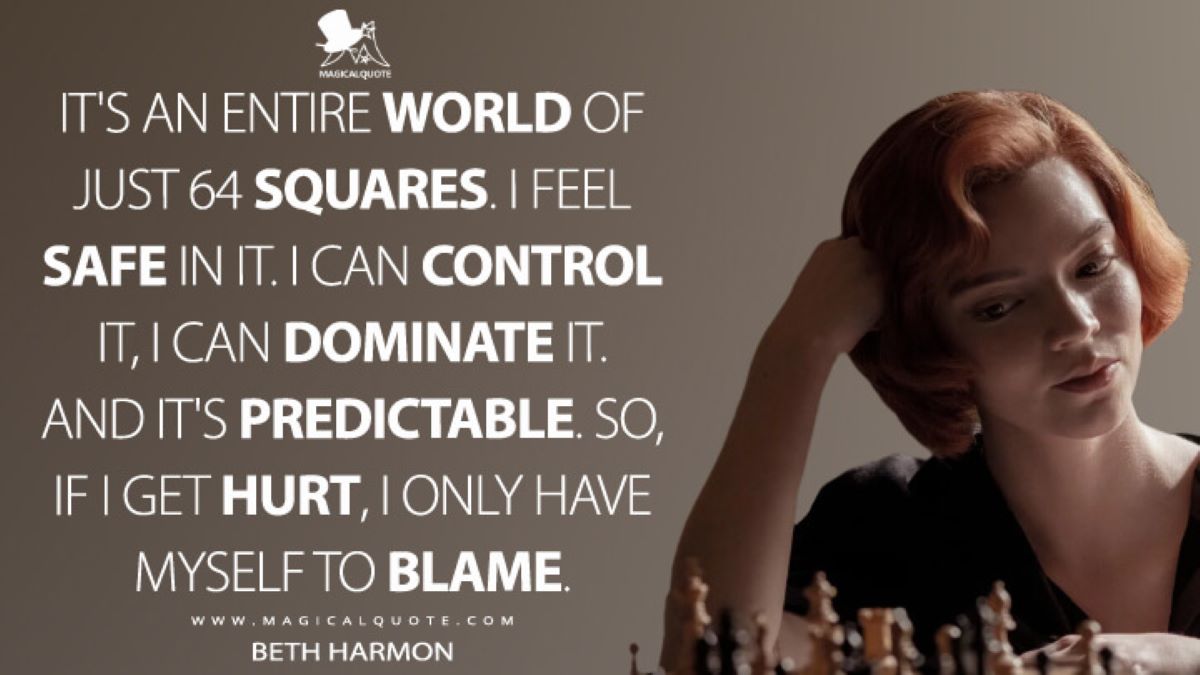 When you look at big bluckbuster features that feature “strong female leads” such as the sequel trilogy of Star Wars, Marvel’s Captain Marvel, or the all female reboot of Ghostbusters, the word divisive comes to mind. From comments during press tours about “This film is not made for you” to thinly layered characters that have “quirky” and “snarky” dialogue to distract from the fact that they have the character depth of a piece of cardboard. These films have caused fractures in the community to the point where this concept of the female lead has soured a lot of people as a point of politicizing a film — rather than telling a story of a strong character that happens to be female. So amidst a frenzy of poorly written dumpster fires, comes the Netflix Original series Queen’s Gambit.

With it’s setting of the 1960s, Queen’s Gambit had every bit of room to be one of the biggest cringe fests possible. It’s a setting of a predominantly male dominated world professionally speaking, and the main character, Beth Harmon (played by Anya Taylor Joy), being an active participant of an even more exclusive arena in the world of chess, this series could have easily become a further extent of the trope “I am better because I am a girl, and I am here to put all the men in their place” and having the character face no challenges whatsoever. However, Queen’s Gambit steers way off from that trope and instead sets itself up as a gold standard that should be emulated in its portrayal of not a strong FEMALE character, but a strong CHARACTER that is female.

The story of Queen’s Gambit focuses on a recently orphaned girl named Beth Harmon. While at a Christian Girls Orphanage, Harmon learned how to play chess from the Janitor of the property and very quickly became adept at the game. As she grows up and gets adopted, she ends up actually competing in these Chess tournaments and starts to quickly build acclaim for her skill and aggressive play, rising quickly as an up and coming master of the game, and one of the few American chess players that could potential rival the undefeated Russian champion: Borgov. It’s pretty basic as far as plots goes and as you are watching you can tell how the writers of the story definitely clung to the formula of the monomyth known today as: The Heroes Journey. While sticking to this formula so rigidly actively aids in giving a sense of familiarity to what we are experiencing, the biggest thing that lends weight to the narrative is the fact that the character never feels like she has unjustly earned her abilities.

Chess is a game that requires a certain level of intellect, intuitiveness, and panchant for problem solving that some people are just born with, and while there is certainly work that is required, there are certain people that are able to just understand that board. While the show’s protagonist, Beth Harmon, is certainly one of those people, it helps that we are showcased her acquiring the knowledge of the game through the first episode or two as she learns from the Orphanage’s Janitor, Mr Shaibel. Throughout her time learning she displays not only her gift of the game, but her flaws as a character as well as she also proves at time to be petulant and quick to rage. However, the greatest flaw that we see is the beginning of her struggle with substance abuse as she becomes addicted to tranqulizer pills that the Orphanage provided to the children as “mood stabilizers” (mind you this is the 50s and this is a Christian Girls Orphanage that was trying to get the students trained into being “proper Christian daughters”). These pills grant her a state of serenity where she is able to visualize a chess board and practice the game in her head after lights out, and her dependance on these pills is not something that is forgotten and actively plays a part of the story as it goes on.

By the time that Harmon gets to actually competing in tournaments, she starts to snowball through opponents. However, again, none of this feels like cheap Mary Sueisms where a character just suddenly has a skill they didn’t before. It has been well established throughout the story so far that Beth has a gift at breaking down the chess board, and is able to handle herself against opponents with much more experience in the game. We expect her to wipe the floor with the people at this first tournament as it’s what will get her noticed and established in the community, and so she continues to steam roll opponents for the next few tournaments she is in. While the show has opportunities to use those victories as an extension of her being female, the show actively rejects that narrative.

There is a point where a journalist is interviewing Harmon and is trying to make it all about her being a girl in this field dominated by men, and when the article comes out she expresses her frustration that they make no mention of her Mentor Mr. Shaibel, and that they didn’t even address her play style. Instead they focused on the least relevant thing about her in the fact that she is a girl in a sport dominated by men. While this is a theme that the world around her cares about because of the times, it’s not something that Harmon cares about or even really seems to notice as she is competing in these earlier competitions. Up until this point in the show, Beth Harmon has been graced by the laurels of victory in every match with no real close calls, constantly outclassing opponents as she works her way up. But no hero’s journey should go without struggle, and hers was coming in the form of the US Champion Benny Watts played by Game of Thrones actor, Thomas Brodie-Sangster.

Benny takes notice of how she plays and is able to use her deconstruction of the board against her and forces her into her first real loss. While the game is considered a draw, it is the first of her professional setbacks, and the way she takes this “defeat” even foreshadows how the character really has never considered the concept of failure, and is overconfident in just her own sheer talent. This whole dynamic makes what is waiting for her in Mexico City pivotal as the midway point of the series’ rising action. Beth goes to Mexico City and suffers her first two substantial losses of the series, and how she reacts to both fuel her struggles for the rest of the series. However, there is only ONE loss I will focus on as it sets up Beth for the rest of the series, and that is the first true and utter loss Beth experiences in a tournament, against the Russian Grand Chess Master, Borgov.

After this loss, Borgov becomes the series’ real antagonist. The Darth Vader to her Luke Skywalker. It’s not even that Borgov is evil, or anything like that, he just represents the embodiment of both skill and hardwork that Beth is going to have to reach. This desire to defeat Borgov, is what reintroduces characters that she has faced before in the series to come out and show her that she only ever relied on her natural affinity and has put no effort into really honing her craft by studying other players, and other games. However, none is so pivotal as when she is brought in to train with US Champion (at that point former) Benny Watts. With Benny’s experience playing against the Russians, and insistence of Elizabeth to stay off the substances and focus solely on training. Benny is able to really bring Beths chess abilities to a whole other level. However, even with all that training, there is an imbalance in Beth’s life, so when she again meets Borgov in Paris, she loses due to having gone out on a bender with an old friend the night before.

It is at this point in the series where Beth must face all of her issues that have manifested throughout her series. From the trauma of how she lost her parents, to her substance abuse, Beth must face these things and move forward, and while there are many who reach out to her to help, the only person that can truly conquer this is Beth. While Beth does face this struggle alone, she finds a catalyst to set her down that path in the person who started her down this journey at the beginning — Mr Shaibel. Upon returning to the orphanage for the janitor’s funeral, she discovers that Shaibel had followed her entire career, collecting newspaper clippings and magazine articles. But at the heart of this memorial was the picture she took with him when she was a little girl who had just learned to play chess. This reinvigorates Beth to get involved in the tournament in Russia, and while she goes into Russia alone and with no support, having burned most of her bridges prior after Paris. While in Russia, she conquers her final test of prudence by dumping all of her remaining pills and rejecting any alchohol during her stay, and she performs so well that during the final night before her last match with Borgov, she recieves a call from all of those friends she had pushed away to concoct a brilliant final strategy to take down Borgov.

I know that I have gone through and given the bare bones of this entire series, but I assure you what I have written only scratches the surface and doesn’t come close to experiencing it yourselves. I don’t usually go this in depth on my breakdowns, but I needed to for this piece because I wanted to showcase that the reason why this show works, where other media with Female Leads has not thusfar, is because Elizabeth Harmon is more human than ANY of those other protagonists. In fact she is so Human that that first top Google search when people look up Queen’s Gambit is: “Was this based on a true story,” and to my surprise, it was complete fiction. This show emersed itself and owned its setting, its characters were human, not just extension and embodiments of gender or racial identities. They were people that you came to empathize with through their struggle, and as they made misstep after misstep, they also learned from those mistakes and by the end emerged as completely different characters than what they started as. This series is not “made” for anyone, it has a target audience but is meant to be enjoyed by all as yet another extension of the hero’s journey. Queen’s Gambit is now streaming on Netflix, and if you have yet to watch it… well just go watch it, you are doing yourself a severe disservice.