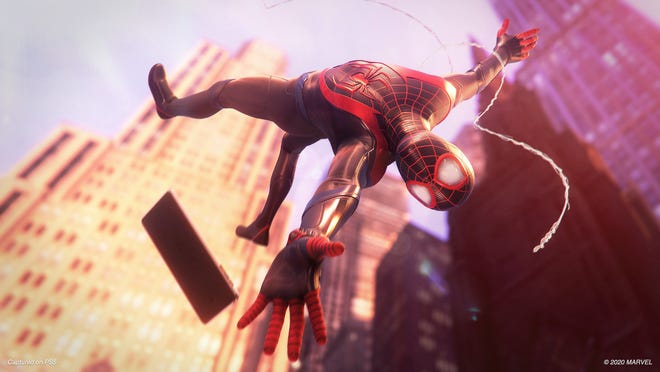 Coming off of what was the major success of Insomniac’s 2018 hit, Spider-Man for the Playstation 4, the studio has returned to the streets of New York City and the skyline of Manhattan with another unbelievable web-slinging experience in Spider-Man: Miles Morales.

Following the epic and emotional conclusion to the 2018 original, Spider-Man: Miles Morales picks up soon after that ending, presented via a “Previously On…” option, shows Miles going through the early stages of Spider-growth under the guise of Peter Parker. This single montage and narration sets the stage for what feels familiar, and yet entirely different; while many fans were pleased the first game had Parker already eight-years into his crime-fighting profession, there are a few that wanted to see those mechanics applied to a less seasoned Spider-Man, and that to me is one of the standout features of Spider-Man: Miles Morales. Miles is still young and incredibly new to the superhero scene, this allows for the developers to add and create entirely new animations which build on his character — he flails when he falls; is far more sporadic in his actions; and at times, seems genuinely surprised at his skills from subtle expression. The controls for Miles also feel a lot more tightened and streamlined from a couple of years ago, the response to action buttons is a little quicker, and fluency between combat animations has significantly improved. New powerups and gadgets such as the “Venom” abilities, invisibility, and holograms have created a new spice for the action and combat moments. Even the idea of tethering electrical webs was brilliant, I thought. The NPC’s, one of the biggest issues I had with the first game, has been drastically overhauled as well. Enemies are now differently gendered; they are far more interactive with one another; I can feel the difficulty of these enemies has increased, and even street civilians are more dynamic than they were before.

While there will be many comparisons between story’s in Miles Morales and 2018’s game, I feel that would be slightly unfair. 2018’s Spider-Man was a full cinematic journey expanding multiple character arcs while introducing a new world for the web-head. Miles Morales on the other hand is much more focused narratively and feels more complete in terms of overall arc, but is still significantly shorter due to this game being more of a spin-off as opposed to a direct sequel. However, I cannot help but feel this game and the projected success of such, will lend Insomniac the confidence to aim for a larger Miles-focused game akin to the first Spider-Man. I feel the soundtrack is significantly improved to the point where you embrace the character’s journey more than you would Parker’s, and this can also be said for many of the supporting characters. Ganke, Phinn, and Aaron Davis all lend themselves to a far more personal relation to Miles and it makes for stronger character interaction, and moments I found myself genuinely enjoying rather than waiting for an end such as a scene featuring Christmas Eve dinner. Thus featuring one of the best “Spidey-Rescue” moments I’ve ever seen. It took me anywhere from 15-20 hours to beat my first run of Spider-Man, whereas Spider-Man: Miles Morales could take you anywhere between 5-8 hours.

The one main issue I take away from Spider-Man: Miles Morales is the usage of one particular main villain — while the character is by no means a travesty or terrible by any stretch, but a rather boring “corporate entity”, the type that smiles in public and is displeased in private. Again, not the worst, but in a world full of such colorful and dynamic characters when even Kingpin is still a bright spot amongst the crowd, I expected a little better. I found Norman Osbourne to be a far more compelling character if I were to make a closer comparison, but again, that plays into the effect of Spider-Man being a larger game overall. There is also a new podcast called “Danikast”, hosted by Danika Hart, and while she is enjoyable, I found myself getting irritated from time to time. J. Jonah Jameson still has his usual schtick, but I never find myself tired or annoyed by it.

Spider-Man: Miles Morales is another epic success by Insomniac. It introduces new features without terrible altering, adjusting, or removing anything that would have been a better fit. New York City during the holiday season is absolutely gorgeous, the citizens have been brought more to life, and so have the characters. While I would have loved a longer story, I honestly had little to no issues with this game. It captured the same emotions and experiences I had two years ago, and even built on some. Miles Morales is a character that has completely evolved his own identity to the masses, and this game proves that.