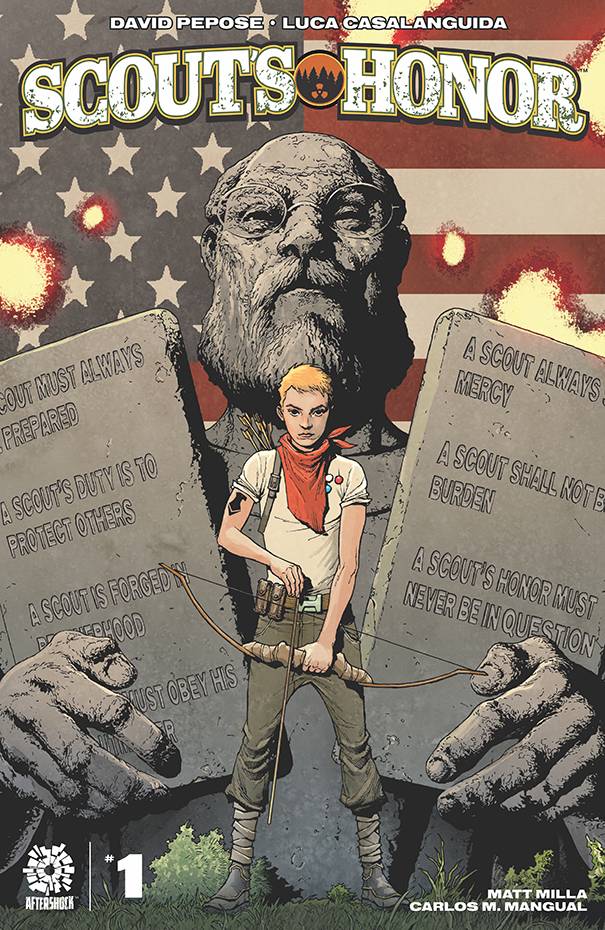 If there is any genre that, to me, feels tired and way overdone at this point it’s post apocalyptic. Zombies, Nuclear fallout, you name it, there has just been so much of it lately that frankly I am fatigued. But then this book comes across my way. I had heard little whispers about Scout’s Honor here and there, this book that has a post nuclear fallout society build its foundations upon a Boyscout Handbook, effectively turning it into to religion to follow. It certainly had me raising my eyebrow, but as I said, even with this seemingly interesting twist, Post Apocalyptic books were something that frankly I had been put off of. However, then my editor said he had reached out to us hear at Up Your Geek to do a review, and considering that initial eyebrow raise the premise gave me, and the fact that an Independent creator was requesting honest feedback, well I said: “Let’s Do This!” And well I am glad that was the decision I made because Scout’s Honor took me by surprise, and while the Post Apocaluptic genre may be a tired one, this book is anything but.

One of the biggest problems that a lot of modern writers have in comics is that they almost talk down to the readers and over explain things, treating the audience as if they were stupid and didn’t have the intelligence or imagination to put things together in their head on their own. However, this is not the case for David Pepose in Scouts Honor. Pepose peppers his audience with little clues but never gives us the whole piece of the pie, allowing his audience to try and make guesswork of things that he will hopefully address as the series continues. The book starts off and we aren’t bombarded with some massive text page explaining the hows and whys of the Nuclear war, only a group of survivors who come out of a Nuclear shelter with a Boyscout Handbook, ready to “inherit” this nuclear world. Then, having given the audience the bare minimum of what it needs to establish a suspense of disbelief in this setting, we skip 200 or so years to where the ACTUAL story begins. Now time skips like this CAN be a big risk, but in the case of Scouts Honor, this skip is used as an effective literary device, providing a shroud of intrigue that stalks the shadows in the rest of the book: “Who were those original Ranger Scouts?”

As I said, we get a 2 century time skip and our actual story takes off with a Ranger Scout hunting trip gone wrong, a Nuclear Boar kills a member of the party of junior Ranger Scouts. The party is led by a character named Dez. Dez is the son of the Scout Master (this society’s equivalent of a High Priest) and Pepose red herring’s us into expecting him to be the protagonist. However, the real “hero” of this story is introduced a few pages later when Kit, the character on the cover, shows up and saves Dez from the Nuclear Boar by blowing it up with an explosive arrow. This sequence is epic, but the thing that really struck me about the who thing was just how far it goes in showing what this society has been built on.

After Kit kills the boar, Dez asks Kit for the favor of letting him take credit for the kill as a way to make up for the fact that he got one of his team killed through his bad leadership, as a way to make his father proud. However, Kit denies this request, and this leads us to the big event that covers a majority of the rest of the book: The Merit badge ceremony. The Ranger Scout heirarchy is a strict meritocracy and so upon laying to rest the fallen Ranger scout from earlier, the funeral shifts to a ceremony of celebration as yet another merit badge is given to Kit’s already long list of badges.

With the establishment of these laws, David Pepose builds up the reveal that establishes Kit’s struggle in this book. The thing that makes Kit an outsider in all of this and puts Kit’s character in immediate conflict with this societal structure. As you, the reader may have noticed, I have jumped through hoops to make sure I have not assigned Kit any pronouns in this piece, and that is because Kit is not a he. Kit is a she. Upon coming home and linking up with her father, the true nature of Kit is revealed as she has been bandaging down her breasts so she can pass as a boy. This secret is one that could, by the tenets of this code, get her killed. But the intrigue doesn’t stop there. Kit is not the only one with a secret, and as I mentioned at the beginning of the piece, the mystery of those initial Ranger Scouts that “inherited” this Nuclear world to make their own lurks in behind the shadows of every panel. Well that secret gets revealed to none other than Kit by this issues’ end. However, in order to find that out, you have to earn it by reading the book!

While I have spent the majority of this piece gushing in particular about Pepose’ writing, there are so many other merits of this book. Just based off the preview images I have used for this piece, I think it can be well established that the art in this book is fantastic, and in addition, the end of the book has something that goes a step further into engrossing you in the world. Pepose took the time of writing up a Ranger Scout Merit Badge Guide, and as far as something extra goes, I don’t think you could ask for any better. While behind the scenes looks at the art is cool, having something like this that further pulls you into the world and wanting more is absolutely fantastic. All in all I would confidently give Scout’s Honor issue 1 a solid 8.5 out of 10. It’s a strong read, fueled by fantastic art, and despite it being in a genre that I have almost entirely sworn off, I will be following each issue that follows. Scout’s Honor issue 1 is the first part of a 5 issue Miniseries, and you can find it in your Local Comicbook Stores or Comixology!

Check out the interview I did with David and go a bit behind the scenes with Scout’s Honor: