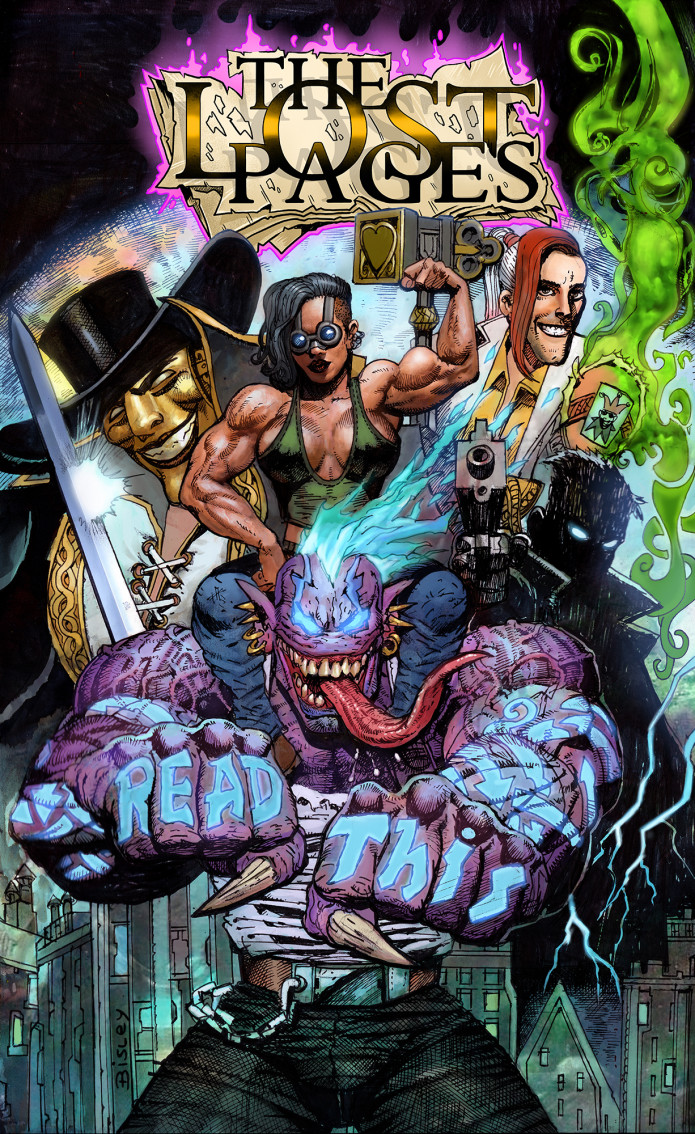 There are few things in comics that are a more mixed bag than Anthology books. Telling a short story in comics is a lot more difficult than a fully fleshed out book, and as a result you get a lot of mixed quality in the writing, and then with the artists changing for each story there are some stories with really great art, and others with…. not so great art. At the end of the day this comes down to most Anthology books feeling like a waste of time and money as you feel like you spent 10 or more dollars on a book and of that book maybe only 2 or 3 stories out of 10 really hit the mark for you as a reader. However, in the indie crowdfunding scene, there is an Anthology book that really has set an unprecedented gold standard for how to handle an anthology book, and that book is none other than The Lost Pages by Zaid Comics (the creative pair of Phil and Brandon Diaz).

While the Diaz brothers bring in swathes of talent across the board for the interior work on their books, the thing that I feel really sets them apart is the writing of these stories. From a narrative standpoint, each of these characters, while independent, serve a collective narrative in that they all exist as characters in a book called “The Lost Pages.” This book’s caretaker is none other than a homeless hermit who tells these stories over a trashcan fire to other such vagabonds and vagrants, and what is even more interesting is the question of where the book’s reality and the stories inside The Lost Pages intersect as it appears that these characters play a roll in the outside world as well.

Now, when you Purchase the Lost Pages there are two books: the main book, which establishes this continuity, and a side book that acts like an expansion pack called: Myths of The Lost Pages. The main book introduces us to a main set of these characters in: The Silhouette, Wildcard, GrimStone, and The Masquerade. Each story has it’s own aesthetic and is distinguishable from the last. The Silhouette feels like a Sin City/ Rorshach adventure following this dark vigilante avenger dealing a dark brand of justice that sees his city as a rotten place of corruption. GrimStone is a really interesting Hulk like story about a Girl who is sick with the powerlessness she feels in life, and decides to take action about it and empower herself by getting into cage fighting. Wildcard feels like John Constantine meets Marvel 1602, and last but not Least The Masquerade is this beautiful love letter to old pulps that feels like a beautiful combination of both Zorro and The Shadow. Each one of these main stories of this book stand out, and it really is a testament to Phil Diaz’s range as a writer. None of these characters feel the same, but more importantly none of the setting blend, which is extra impressive since, with exception to Wildcard, all the stories of the Lost Pages take place in Chicago. Nevertheless, each Chicago has its own identity as each character that we see it through, sees it in a different lens. As strong as this book was though, the book I am most excited to talk about is the Myths of The Lost Pages.

By the time you finish The Lost Pages‘ main book, you are craving more and so the Diaz brothers provide that not only gives us more of the characters we saw in the first book, BUT expands the universe. Myths of the Lost Pages does for this book what things like The Silmarillion did to expand upon Tolkein’s Middle Earth. This collection of short vignettes brings a level of atmosphere to the Lost Pages that not only sets up for more potential characters and short stories moving forward, but makes the world richer. The story We The People, which feels like a blend between Captain America and old school Daredevil, stood out in particular to me. Not only was the design just absolutely fantastic and gripping, but the upward potential for the character moving forward is limited only by Phil Diaz’s ability to write those stories, and frankly, given how he wrote these two books, that ability is virtually limitless.

So at this point, you are probably wondering about the title of my piece, what was the Key to this Fantastic Anthology. While I brushed on the narrative advantages of having all these characters linked through their existence in the Lost Pages themselves, there is a key that supercedes all of that, and it’s a simple one. These characters were created by the Diaz brothers, and as such there is no better caretaker for their stories than them. All of these stories were written by Phil Diaz, and while that certainly makes this book a HUGE flex of creative range for him as a writer, it also brings an authenticity to each story that a lot of Anthologies lack, and while Comics may be a visual medium, it is still literature. The Lost Pages demonstrates something that I feel that the western market needs to learn from, in that the best caretaker of a character and their story, is the creator themselves, and that while we love seeing certain characters and perhaps a different creator’s take on that character, a story with no finite point can lose a lot of its luster over time. Per the Homeless man in the book, there comes a point where each of these characters stories will end, and in one instance we even see that end. While these stories may have a lot of different art teams assigned to them in order to best establish the visual tones of the books, they are directed by the singular vision of the creators, and that is why this book excels where so many other Anthologies have failed.

The Lost Pages and Myths of The Lost Pages was very clear 9 out of 10 for me. While there were some stories where the art wasn’t necessarily my cup of tea, each and every stroy felt worth my time and my monetary investment. I wanted more of every character I read about and I am excited to see more of these characters as The Lost Pages continues. The book is still In Demand on the IndieGoGo Platform, and is already printed so getting it fulfilled should be a rathe expedient process! Back now while you can!

After An Explosive Finale, It May Be Time For Power Book II To Move On from The Ghost Subtitle
“Scout’s Honor”: Nuclear Apocalypse With a “Lord of the Flies” Style Twist’