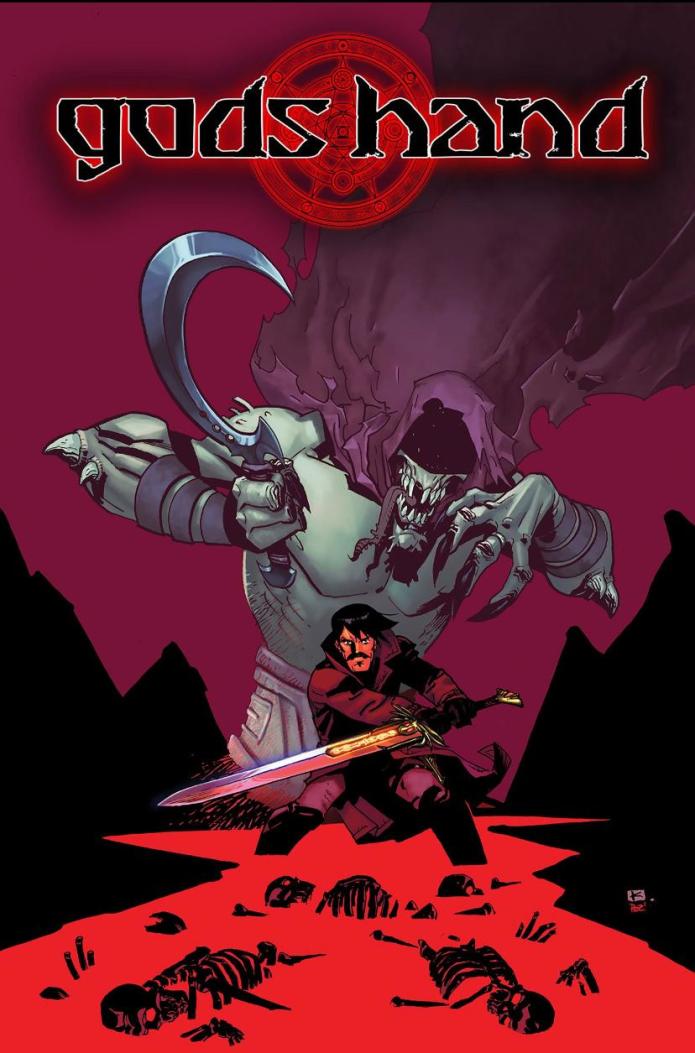 Do you like tales of Dark Magic, Werewolves, Yetis, and Lovecraftian aboritions, and if you are a fan of DC’s John Constantine: The Hellblazer, there is a book you have criminally slept on. Wolfpack Press’ Gods Hand number 1 is a independently crowdfunded comic written and penciled by Anthony Figaro, and if there was one comic to really jump start 2021 for me so far, it’s Gods Hand.

I am not going to lie to you, it gives me great joy to review this book. I look at this creative team and I see the names of people I am proud to call friends, and colleagues in this industry. I have streamed multiple times with Anthony, and he’s a great dude that truly loves and understands this medium. James Erik Hodson, who handles the inks of this book, is a great friend of mine who also has his own series on WebToon called Dreaded Dinosaur Man (Also a fantastic series). So to see guys like this, people that I have the utmost respect for, doing a book like this warms my heart because this book is FANTASTIC!

The base premise of Gods Hand focuses around an immortal Jean Lefitte (New Orleans Pirate Legend and Hero of the Battle of New Orleans in 1812) who leads a Hellboy style team that hunt the Supernatural. However, Jean’s past seems to be catching up with him as the agency that had exiled him from New Orleans for something known only as The Katrina incident, calls him back when his former lover and reknown Voodoo Queen, Marie Levaeau, has been murdered. Jean, along with his team, head back for a 48 hour operation in the City that Care Forgot to investigate.

The first thing that drew me to this book was the choice of protagonist. Now, for any that don’t know I write a comic book called Elysian Fields which is a battle royale of mythological heroes of past cultures, I say this because I want to apply some context that is important here: I LOVE HISTORY. So when I heard that there was a book starring one of the most underrated pirates in history was going to be leading a supernatural Hellboy type book, well, Anthony had my money faster than a Frenchman can say Mon Dieu!

Now I think it goes without say that the art in this book is next level and easily stands level if not well over what most of the books in the mainstream produce right now. However, what really stands out to me is Anthony’s writing and ability to simultaneously world build. While there are moments where I can tell that he is trying to do this and it comes off a bit clunky (there is a part in the first few pages where he shares the same information with us multiple times when it only was necessary to do once), for the most part this is his strongest point. As a result Gods Hand is a comic filled with beautiful art and a rich atmosphere that is amped up a notch by this writing. Quite possibly my favorite part of the book is when one of Lefitte’s team, Whitey, is revealed to be a Yetti and fights off a pack of Lycans. The art is badass enough on its own, but Anthony’s mastery of storytelling ensures that this fight not only looks cool but tells us a story about this world’s history and the dynamic between these two beasts.

Godshand is a book that feels like the indie response to John Constantine and even a little bit of Hellboy. If you enjoy those kinds of stories of hunting the supernatural, you don’t want to miss out on this fantastic book and while its initial campaign may no longer be live, you can still get ahold of the book through Anthony’s currenct crowdfunding campaign: Justice City Chronicles which also promises to be a fantastic book and another great addition to Anthony’s imprint: Wolfpack Comics.

WonderCon 2021 Review – The Arkham Sessions: The Psychology Of Batman
DC Future State – Infinite Frontier: What threads are being followed from the 2021 Event?