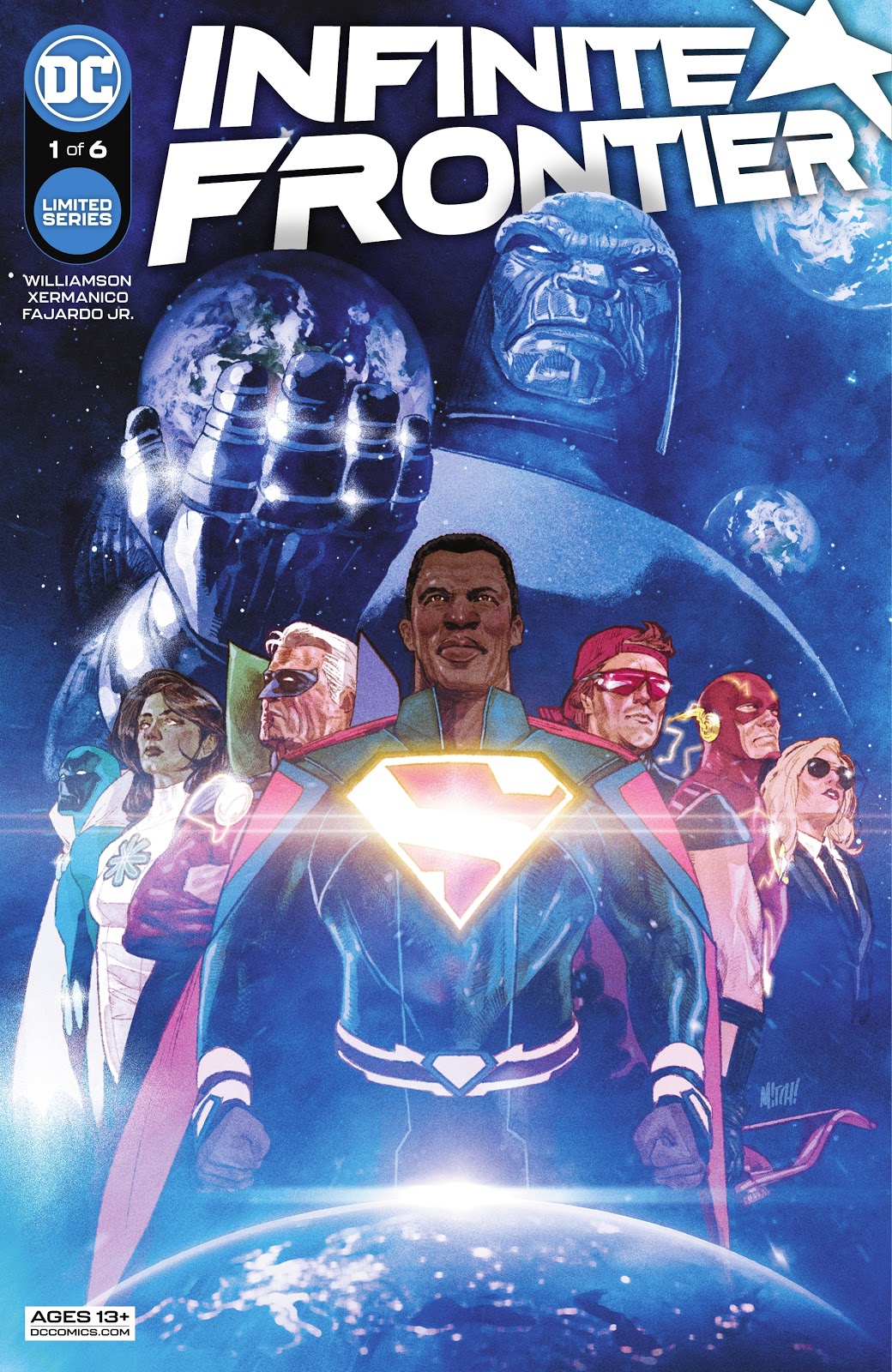 The Multiverse at Large

For those who have kept up with DC since the initial launch of the New 52, you would know that the DC Universe has gone through many changes and soon enough, an attempt to reconnect with its roots. And in the attempt, its run into walls and had some varying degrees of success like Rebirth, which helped recapture the essence of the characters that had been lost in the New 52 era. But in other cases, fans felt like their beloved universe was being altered too much or had lost its sense of direction as event after event use metacontext to try to fix what was wrong with the DCU. Whether it be a Super-God like Dr. Manhattan tampering with the timeline, or The Batman Who Laughs trying to turn the Multiverse into another Dark Multiverse bent on destroying everything it touches, the DCU has been through the roughest years in its existence.

But now, we have reached a point where all those Multiverse/Metaverse affecting events have all been for something. Now, we see the DCU come to a point where it must choose what path to walk down. If its any consolation, it would seem writer Joshua Williamson and artist Alejandro Xermanico have figured out a way to bring in all the classic elements of DC Comics and made it digestible for new readers to join in on. The story is being set up as part 1 of a 3 part saga with Williamson at the head of. Here, we see various heroes come together to battle an incoming threat that promises to deliver thrills and action as well as reunite characters who haven’t been on page together for some time as well as throwing together characters who have never interacted with the Multiverse before.

The issue begins with what appears to be a recreation of Superman’s origins, however it is not. As the rocket crashes into a field, a pickup truck stops and out of it comes two elderly people. Claiming they moved out the city to avoid this kind of mess, the couple discover that inside is none other than Flashpoint Batman. Last seen having his back broken by Bane during Tom Kings run on Batman, this Batman, however, isn’t the Batman for this world which is revealed to be Earth-23, home to Calvin Ellis AKA President Superman. The story then reveals that the existence of the Multiverse is now public knowledge to everyone, as citizens across the world debate what this information means for not only their world, but their lives. Having discover your world has ended and been remade a handful of times prior, its sure to rattle peoples understanding of life and their place in it. But we are whisked away to see Alan Scott and Obsidian battling old Crisis villain, Extant from Zero Hour, alongside members of The Totality. As the two manage to contain and defeat him, they venture off to meet Jade, sister to Obsidian and daughter to Alan Scott. But before they meet up with her, a giant explosion erupts out the JSA headquarters in what now begins Alan’s leg of the adventure.

Elsewhere, we see Cameron Chase attempting to enjoy some dessert in Paris when Director Bones of the DEO comes up and begins to talk to her. As much as she makes it clear she’s not on duty, Bones explains that the DEO has been reinstated following the event of Event Leviathan and that their first and only duty now is to monitor any incoming threats from the Multiverse, acting as a second line of defense following The Totality. Chase attempts to push Bones off as she doesn’t really like him personally, but once he shows her something on his phone, Chase immediately gains some interest and loses her appetite.

We then fade in as numerous people are asking if the person waking up is okay, and we see that Flashpoint Batman has been taken to the House of Heroes, where Justice Incarnate uses as a base of operations. Captain Carrot of Earth-26 and Machinehead of Earth-8 as well as a few others are trying to aid Flashpoint Batman but he immediately takes off running until he realizes he has nowhere to run to. Seeing the Bleed that exists between Earths, he’s then met with the entirety of Justice Incarnate led by President Superman. Knowing that is is a version of Thomas Wayne, the team asks him how he came to rocket towards Earth-23 when he actually comes from a diverged timeline of Earth-0. He tells them to ask the Flash Barry Allen to which Superman asks in return, which version of Barry?

Jumping to Barry on a run thru the multiverse, we see he’s trying to gain enough energy to gain access to the new mystery world of Earth Omega. Accessing it however is difficult as the new world isn’t simply based farther out into the known Multiverse, but rather is blocked off by thicker dimensional walls than a normal Earth. Eventually, Barry reaches this desolate world and begins to realize that it feels familiar to him, almost as if its a crime scene he’s been to when WHAM!, Barry finds the corpses of The Quintessense, a group of five cosmic beings charged with keeping an eye out on the universe. When we last saw these beings, it was back in Infinite Frontier #0 and they were killed by none other than Darkseid, who had regained all of his lost strength from prior Crisis events and had swore to finally take the Multiverse for himself. But rather than finding Darkseid on Earth Omega, Barry meets another person of his past that has connections to the original Crisis, Psycho Pirate!!! Now wearing the Omega symbol on his chest, he uses his power to pin Flash down to the ground as a off panel voice tells him he has a role to play in this story. Pirate tells Flash that him and his new boss, presumably Darkseid, needs him to aid them in finding someone important to their plot and that this time, Flash will willingly be on their side of this new upcoming Crisis.

Finally, we come to a small diner somewhere in America and people inside are talking about the Multiverse and their place in it. A woman claims she has dreams where she can see the events of Death Metal and The Batman Who Laughs as he strolls across the war-torn battlefield. She’s met with some people agreeing that they see the dreams too and how it’s happened more than once before when a angry man stands up and tells them all that its all lies. He says the Multiverse is a fictional concept the heroes use to keep the ordinary citizen in fear and that the heroes aren’t what they claim to be. Suddenly, an explosion goes off as two armed guards and a woman walk in claiming they are there to take in Roy Harper AKA Speedy AKA Red Arrow AKA Arsenal. Last we saw of him, Roy had been resurrected after he died in Heroes in Crisis and was now living his life roaming the nation seeking purpose in his newly gifted life. However, the woman, going by X-tract, wants to capture him and take him elsewhere as he’s supposedly not supposed to be alive again. She is about to render Roy unconscious when suddenly a burst of black energy punches X-Tract out of the diner and takes care of the other guards. Roy then notices something horrible has happened and he sees that he is now the new owner of the Black Lantern ring, a ring that only chooses those who are dead.

So we see that Williamson has a lot that he wants to do with this miniseries, and he isn’t holding back in terms of using various characters that fans are dying to see again. Overall, this was a phenomenal first issue and it brings a lot of Hope to someone who was enthralled with Rebirth and wanted to see this universe united in a way that hasn’t been seen in a very long time. The art by Xermanico is beautiful, giving off a classic style is sure to be imitated in future events when they look back on this. Everyone looks like they were meant to be drawn this way and i can’t see these characters be drawn by anyone else now. That’s how good Williamson and Xermanico are doing with this one issue alone, it invokes a sense of history and connectivity that DC fans would love to see more of. This is looking to be the beginnings of a new era in DC and its one people are sure to look back fondly on one day. The use of underrated and underused characters as well as using different versions of popular ones like Batman and Superman really gives you the sense that this universe is bigger than just the popular ones everyone knows. Until then, we are on this crazy adventure together! Let us know what you thought of the first issue and stay tuned for future reviews on this event and more like it.