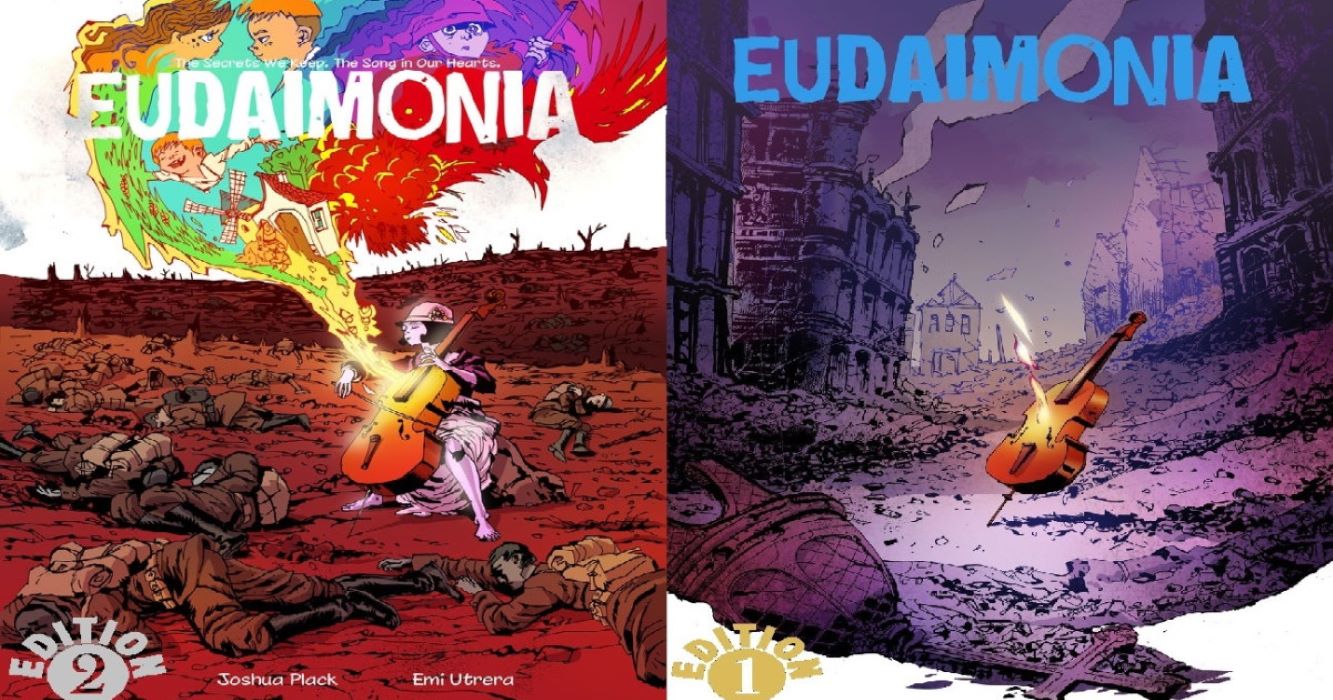 Eudaimonia, According to Aristotle
Is the Good Life Led by Fortunate Men.
Sought in God, Wealth, The End of the Bottle.
Or Even a Song Every Now and Then.

Eudaimonia The Song in Our Hearts

If the title of this book did not already tease it, Eudaimonia might just be one of the smartest comics I have ever read. World War I is a time period that I fell is often overlooked when we look at modern history. I think a great deal of that has to do with the fact that despite that it ended, it never truly resolved much of anything, as the world would be right back at eachother’s throats within 20 years. It’s lasting legacy was in its tragedy from which a mini renaissance of literature and music sprung. Joshua Plak’s Eudaimonia is both a celebration and a memorial of this event where “beauty and misery exist in the same space.”

The first thing that every single person will note about this comic is that it’s just absolutely one of the most beautiful comics you’ve ever seen. Emi Utrera delivers these hauntingly beautiful pieces that use bright deep colors to convey not only the horror of the war, but the twisted beauty that exists in it as well. Music is a big theme in this book, and the way Emi showcases how song, even if solely instrumental, tells just as much of a story to the ones who play, and the ones who listen is phenomenal. Emi does this by drawing effectively a living dialogue box, its heart an etherial story plays out across the page transporting the setting to a brighter, more beautiful place. However, as brilliant as the art is, the heart of this book is in how it’s written, because it’s not written in a traditional sense. Instead, Plack gives us something very special and unique.

I signed my life away for this here task,
Three squares, a gun, and neatly polished shoes
To snipe the Huns and nick this copper flask
To find my rhythm where I leave the Blues.

If you haven’t noticed by now, I have included quotations from Eudaimonia, and if you pay attention there is something that should stand out right away. This entire comic is written in a rhyiming, metered verse, and it’s beautiful. The way Josh’s poetry pairs with the art elevates the experience to a whole other level and makes it an experience that really stands out from the other comics I’ve read, not just this year but in my entire time as a reader. However, my favorite thing about how he wrote these books is that none of the protagonists are named in the traditional sense. They each have poetic monikers for certain, title’s that the reader can use to differentiate characters from one another. However, the choice to make the main characters of these stories (the old man, the woman with a cello, or the son not so prodigal) effectively nameless was very deliberate. WWI is known as The Lost Generation and so the thing that this decision does is give an identity to those who were lost. These stories are works of fiction, but the authenticity of the period which they represent brings life to an entire generation that was lost. This War stripped many of their names and left them as unknown in the scope of history, so by making these stories with characters that have a maleable identity that could belong to anyone, those who were lost can truly be remembered, and to me that element of Eudaimonia is what makes it so poignant.

There is, however, one criticism I can make of this book in that its greatest strength is also its greatest weakness. This book is beautiful, it’s high art in comic form and honestly that could be problematic as I fear it may make the book less accessible to the general market. A good deal of people who read comics do so for the escapism that these fantastical settings where good and evil clash provide, so to have something so real- and so dense and heavy, it could be problematic. I worry that it may not be a book that everyone can enjoy. It is targeted for a specific market, Josh is a WWI historian, and his love of that setting is clear in how his art has been directed to depict the setting, and how his writing reflects and respects the likes of Ernest Hemmingway. However, that is not generally the standard audience of comics. So with that in mind, for everyone interested in checking out Eudaimonia, just know that this is not a book for the faint of heart, and that it’s not your typical comic. It’s a time period preserved through visual and narrative art.

All in all, Eudaimonia is an experience that I believe everyone should have. It’s beautiful art by Emi Utrera will entrance you and the verse written by Joshua Plack will speak to you deep down. As it’s poetry I have read this book aloud to several people, all of whom have been enthralled by its beauty. Sadly the Eudaimonia campaign is over, and so I have no place for you to go and buy it, but maybe if you reach out to Josh on twitter he might have a copy or two left to send. Either way, Josh is definitely a creator to watch out for as he’s also in the process of a new project that is a horror book called: How to Die. Be sure to check out Josh and if you can check out Eudaimonia!