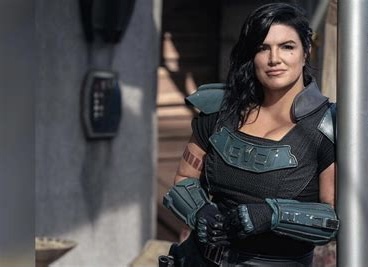 Actress Gina Carano has reportedly been released from her role on The Mandalorian as former Rebel shock trooper Cara Dune, following significant criticism regarding her distasteful social media posts.

Via The Hollywood Reporter:

“Gina Carano is not currently employed by Lucasfilm and there are no plans for her to be in the future,” a Lucasfilm spokesperson said in a statement. “Nevertheless, her social media posts denigrating people based on their cultural and religious identities are abhorrent and unacceptable.”

Wednesday #FireGinaCarano was trending on Twitter after she posted a story on Instagram comparing conservatives or Republicans to victims of the Holocaust.

Sharing a post from another account, Carano wrote, “Jews were beaten in the streets, not by Nazi soldiers but by their neighbors…even by children.” “Because history is edited, most people today don’t realize that to get to the point where Nazi soldiers could easily round up thousands of Jews, the government first made their own neighbors hate them simply for being Jews. How is that any different from hating someone for their political views,” the 38-year-old former mixed martial artist said.

This of course isn’t the first controversy Carano has been in the news for, as she has posted a bevy of abhorrent content on her Twitter account that has received backlash from fans and fellow actors. Also, in the past few months Carano has also gotten attention for being anti-mask, spreading misinformation about the election, and posting about QAnon. Even asking fans to join her on Parler, a social media platform with heavy concerns of racist members, conservatives, and the spread of misinformation and potential for radicalizing users on a platform that’s taken a hands-off approach to regulating content.

The Mandalorian debuted on Disney+ in November 2019 and helped the streaming giant garner impressive numbers with regard to subscribers. Carano’s Kara Dune, created by The Mandalorian creator Jon Favreau, became an instant fan favorite, with the actor praised for her portrayal. But her tweets have also made her a controversial figure among Star Wars fans.

Lucasfilm reportedly had plans for Carano’s Kara Dune to star in her own series, which was to be announced at Disney’s investor’s day presentation back in December. However, those plans were scrapped following her November tweets. According to THR, Multiple Mandalorian spinoffs are in the works from executive producers Jon Favreau and Dave Filoni, including Rangers of the New Republic, which could have potentially starred Carano.

Lucasfilm wasted no time axing Carano, as it seems this last Tweet of hers was the last straw.