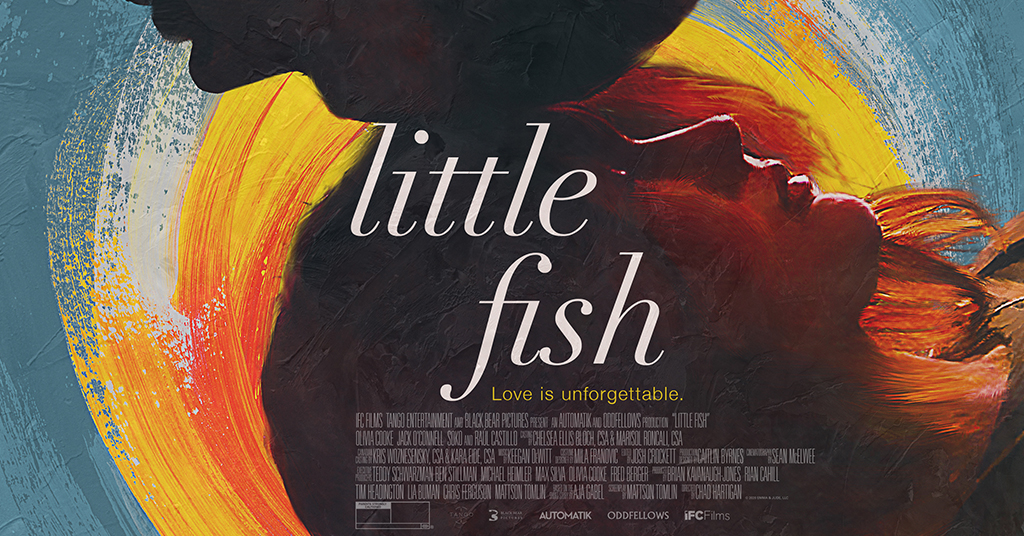 To say that the effect of COVID-19 has affected the world would be an understatement; flooded hospitals, panicked international markets, and overall uncertainty has been, for many of us, a now daily experience for the last twelve months. This fear, and confusion is captured perfectly, tragically, and even beautifully in Director Chad Hartigan’s third-feature film, Little Fish.

With the world in graspes of pandemic due to a virus, which affects human beings neurologically, called Neuroiflammatory Infection, otherwise known as NIA. The film portray’s the virus affects humanity’s memories two ways, one which displaces the memories of those infected over the course of weeks or months, the second affecting them instantly. Hartigan manages to display both the harmless and harmful consequences of the virus, showing some victims losing their memory instantly while they’re doing a basic activity, and another while piloting an aircraft. It truly randomizes the horror of the situation in a terrifying, yet realistic manner, that puts the audience into a state of uncertainty for the character’s.

Based on a short story by Aja Gabel, Little Fish follows Jude Williams (Jack O’ Connell), and Emma Ryerson (Olivia Cooke), a young couple dealing with the severity of NIA, and how the disease affects their relationship. Once Jude begins feeling his own loss of memory, the couple realize their dire nature, and soon begin to slip away from whom they once were. Intertwined with glimpses of their past together, Chad Hartigan and Writer Mattson Tomlin are able to brilliantly showcase maticulous character development in a film where the dynamics between Jude and Emma are far more intimate. Typically in a film such as this, the focus would be on the worldwide action to overcome or prevent the spread of the virus (2011’s Contagion, and 2016’s Inferno immediately come to mind). Little Fish manages to tell a small story on a big scale, and does so in such a dramatic, and heartbreaking way, whislt also managing to convey themes of hope and salvationism.

By effectively using the opening to portray the harshness of NIA, and the dramatic beats of Jude and Emma’s love story to propell the narrative, Little Fish is able to encapsulate a powerful final act that is sure to have viewer’s emotions racing. The experiences feel real, and all the moreso due to our own world’s current situation. Olivia Cooke, and Jack O’ Connell both give convincing performances, and their chemistry together are their strongest highlights. Gorgeous Cinematography by Sean McElwee, and crafty Editing by Josh Crockett should also be taken into consideration as they allow for the world Hartigan is trying to capture.

One could argue that this film benefits largely from the affect of a real pandemic coinsiding with it’s release, however I find that to be an unfair criticism. While the emotional connection to the characters may have been more dissonant, Little Fish is still an exceptional film. It captures beauty and heartbreak, and explores the depth of human relation and the existence of memory intellectually without losing any interest. This may very well be one of the best film’s of 2021 already.

‘Bad Cupid’ – Review
Up Your Geek: Spotlight – An Interview With Director Chad Hartigan