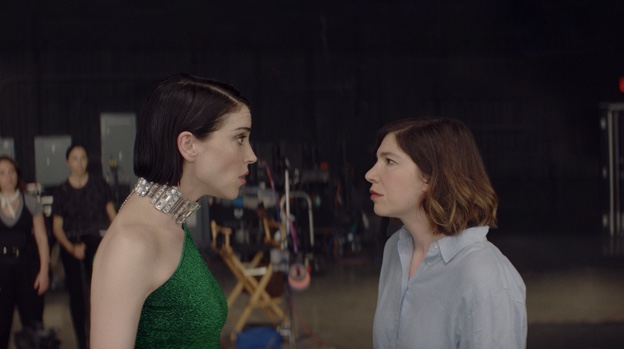 In an announcement made earlier today, IFC Films reported that it is acquiring the North American rights to The Nowhere Inn from Topic Studios, produced, written by, and starring Carrie Brownstein and Annie ‘St. Vincent’ Clark from first-time filmmaker and frequent Portlandia collaborator / writer Bill Benz. The film marks the first feature length film in which Clark has simultaneously produced, starred and composed all the original music. The Nowhere Inn had its world premiere at the 2020 Sundance Film Festival in the Midnight Section, and IFC Films will be releasing The Nowhere Inn in Fall 2021.

From real-life friends Annie Clark (a.k.a. GRAMMY award-winning musician St. Vincent) and Carrie Brownstein (Portlandia, Sleater-Kinney, the best-selling Hunger Makes Me a Modern Girl) comes the metafictional account of two creative forces banding together to make a documentary about St. Vincent’s music, touring life, and public persona. But they quickly discover unpredictable forces lurking within subject and filmmaker that threaten to derail the friendship, the project, and the duo’s creative lives.

Arianna Bocco, President at IFC Films said, “Carrie Brownstein and Annie Clark brilliantly push the boundaries of how we communicate through film, music and comedy as only true artists can. We’re thrilled to take viewers to THE NOWHERE INN and bring this unique and hilarious film to audiences and fans nationwide.”

“We are extremely proud of what we’ve created with The Nowhere Inn,” said Brownstein and Clark. “And we couldn’t imagine a better home and partner for it than IFC Films.”

Debut feature filmmaker Bill Benz, a frequent “Portlandia” collaborator and writer, delivers a densely woven, laugh-out-loud funny and increasingly fractured commentary on reality, identity, and authenticity. This is the story of two close friends’ attempt to wrestle the truth out of a complex subject before the hall of mirrors that is their artistic lives devours them completely.

Added Ryan Heller, Senior Vice President, Film & Acquisitions for Topic Studios, “It has been our true joy to collaborate with Annie, Carrie and Bill on this audacious labor or love and friendship. And we’re thrilled to be in such great hands with Arianna and the team at IFC Films who have made a virtue of delivering bold, genre-defying stories to audiences.”

Topic Studios financed the film and produced with Ways and Means and Crazy Galore. The film was produced by Jett Steiger, Lana Kim, Annie Clark and Carrie Brownstein. Executive producers for Topic Studios are Michael Bloom, Ryan Heller and Maria Zuckerman. Adam Pincus and Bobcat Goldthwait also serve as executive producers. Co-producers are Josh Bachove and Danny Harris.
The deal for the film was negotiated by IFC Films’ EVP of Acquisitions and Productions Arianna Bocco with Deborah McIntosh at Endeavor Content and Paradigm on behalf of the filmmakers.

‘Superman’ reboot in the works with Ta-Nehisi Coates, J.J. Abrams
Win A Chance To Watch ‘Zack Snyder’s Justice League’ Before Everyone Else