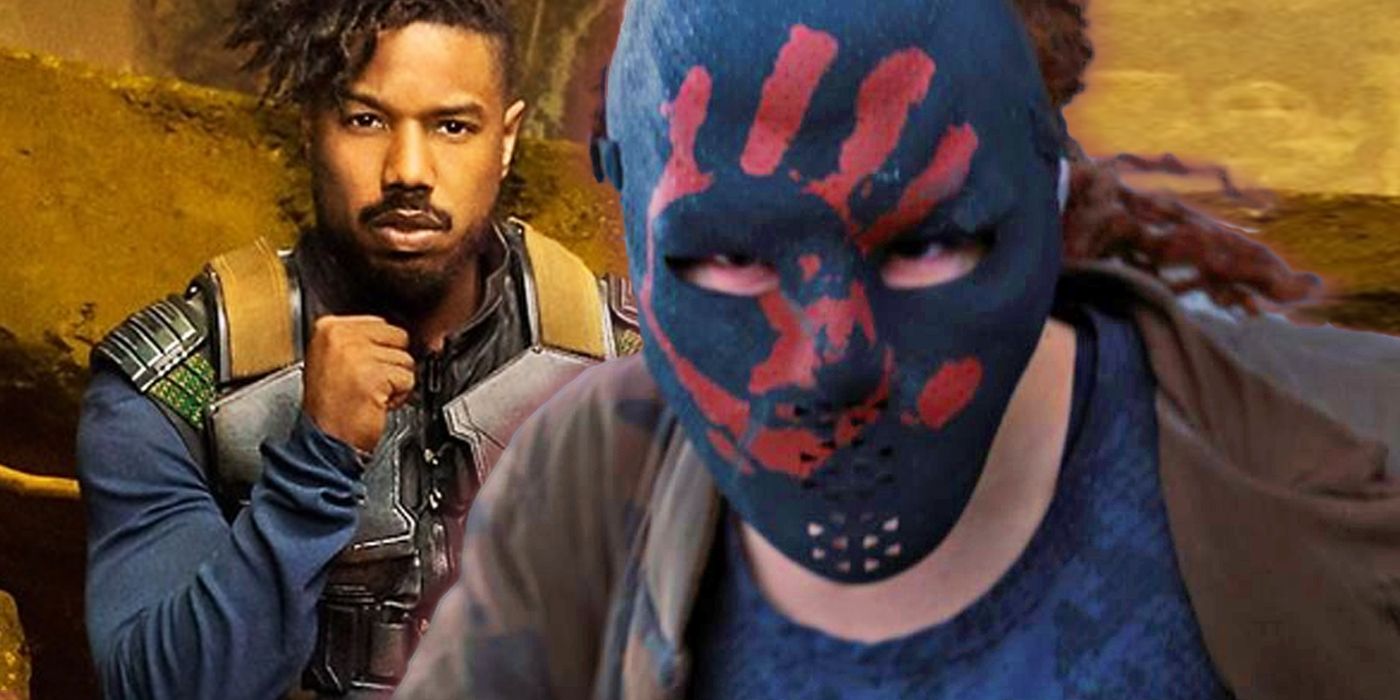 Happy New Year Everyone! It has certainly been a long time since my last post. 2021 threw some massive curve balls my way, and having swatted a few away, it feels nice to finally have the opportunity to come back and do a piece. Now, this piece was inspired by some statements made by two separate actors, Michael B Jordan and Erin Kellyman, during interviews recently…ish. I realize that it’s not exactly on the tip of people’s tongues at this point, but it was the fact that these statements were made by two rising stars with almost the same verbiage that led to me writing this. It genuinely stuck with me because while there has always been a point of discussion, particularly with the Marvel Cinematic Universe (MCU), of a villain problem, these quotes truly speak to that problem. It would seem that somewhere in these creative rooms of writers there is a disconnect about what a villain is, and from the standpoint of the actors, a disconnect between what separates the villain from the hero.

I think the best place to begin with this is to look at Michael B Jordan’s defense of Killmonger. For one it is the more recent, but for another, Jordan goes more in depth about the character than Kellyman did in defending her character Karli Morganthau. Jordan gives his defense (which have been boiled down to his key points courtesy of an article by CBR) during his interview with Taylor Rooks of the Bleacher Report:

“I think he was a necessary part of the conversation. I think he cared about his people just as much as T’Challa. He just had a different way of going about getting it done… and I don’t think’ his argument was completely wrong. I don’t think T’Challa’s argument was completely wrong. I think it was a necessary conversation that needed to be had….I think he was a historian that studied history — the history of government and oppression, and Erik’s a really smart guy — MIT graduate. The guy is very intelligent and he saw that there was really only one way to change things so he went about that.” (Jordan, Bleacher Report)

Now Jordan creates a defense of Killmonger centered around noble intentions and the importance of creating a conversation. Erik Killmonger, the villain of Black Panther, is motivated by the inequity the slaves of the Trans Atlantic Slave Trade suffered as well as their descendants. All in all I believe as far as character motivations go, it’s a pretty sound one. When you are stuck looking out into darkness, when your focus is solely based around the injustices done to your ancestors, it’s hardly something that inspires you to believe in the best in people. Erik Killmonger’s motivation is indeed reasonable, and he has great points- but that doesn’t make him not a villain.

Villain archetypes vary, however, in an era where a more casual audience prefers an element of realism over the fantastical, the flat-out evil villain has been more frequently substituted by what I like to call the Journey-failed Hero. When it comes down to stories, especially those of heroic nature, they generally follow the same kind of flow, this concept made concrete by the famous work Hero of A Thousand Faces. In the hero’s journey, there is a moment where the hero is placed in a position where his heroic virtues are put to the test (usually the one they struggle with most being the key factor). They figure a way through and pass the test to complete their arc. This is where the Journey-failed Hero comes in. In this villain archetype, we see a character who was at one point put down the same path of the hero’s journey, but at the ultimate test of their heroic virtues (the four cardinal virtues in question being wisdom, courage, temperance, and justice as defined by Plato), they fell. Killmonger is very much this same type of hero- a man raised to be a savior to his people, but in the ultimate test of his wisdom (the ability to make the right decision) he chooses to embrace the very inequity that harmed his people if this sounds familiar it should because MCU Killmonger is very similar to probably the most well known of these characters. I am talking of course about Max “Magnus” Eisenhardt, or as most know him- Magneto.

I am not going to spend too much time discussing the origins of Magneto, because if you are subscribed to a channel called Up Your Geek, I would hope that at you would have at least a basic knowledge of the character. He was a young Jewish child during the Second World War and experience first hand the cleansing of the Jewish people at the hands of Nazi Germany. He was in the ghettos, concentration camps, you name it he saw it (please be sure to read X-Men Legacies: Magneto Testament if you have not, it is probably the best flesh out of his Holocaust origin that there is). However, he was a survivor. It is unclear when his mutant powers truly began to manifest, but the point is that he was quick to put them to work. Initially he used them to aid as a Nazi Hunter for the Israeli and US governments- hunting for justice for his massacred friends and family- but then he found out that a good deal of the people he hunted down were spared due to Operation Paper Clip, and so humanity failed him once more. Then he met Charles Xavier, and discovered that there were others like him, mutants.

It is at this part of Magneto’s origin, where he becomes this Journey-failed Hero archetype. It is where we see Magneto put to his ultimate test of his heroic virtue. Usually with this archetype, the test is one of wisdom, and to be clear, that is not to say that the character failed to be smart. Wisdom in this case is the ability to make the right decision. When he and Charles find out they are not alone- when they find out about Mutants both men choose to be saviors of their kind. However, this decision would put both men in a crossroads. Charles saw the way to do this by creating equity, reaching an understanding with the rest of humanity by being a force dedicated to good. Magneto, however, saw only the darkness he had been surrounded with his whole life. In a way, the revelation that he was a Mutant was a way for him to strip himself of his Humanity. He wasn’t little Max at the mercy of Nazi hate, he was Magneto- savior of Mutant Kind and protector of the next stage of Evolution. The tragic Irony of Magneto is that in spite of the horror he was subjected to, he became the very monster that he despised. Charles Xavier and those that follow him are heroes because they choose equality, and understanding- reason. Magneto is the villain because he espouses supremacy and fear. Which brings us back to Killmonger, and even the Flag Smashers.

We see Killmonger and he’s literally looking to use Wakanda as a means to take over the world and flip the institution. Put the oppressor’s in chains and make them experience the same difficulties his people went through. In other words, Killmonger is a supremacist. He wanted the world to bow to Wakandan Supremacy. It does not matter how noble Killmonger’s intentions may have been, how much we empathize with his motivations or his beginnings, he stands for supremacy and supremacy is evil. Genocide, slavery, they are all evil. Jordan states that Killmonger’s a student of history as if it excuses this, when point of fact it makes it worse. If you look to the past and see the wicked and recognize it as such, but then wish to continue that cycle on your own terms, does that not make you a million times worse than the people who committed those actions without the same context you had? History comes from the Greek historiae, or inquiries. Perhaps in Killmonger’s journey he looked to the past seeking the answers but asking the wrong questions, we don’t know enough about his back story other than his father expected him to be a person to guide his people some day. But whatever he faced during his journey, the study of history should have been the thing to prevent his course of action. Perhaps it was looking at the dark moments of history and focusing on them so hard that he became consumed, just like Magneto, to believe the only way to save his people, was by supremacy and fear. Killmonger is no hero, he is a villain. Karli Morgenthau may have started by wanting to protect the homes of her people after the blip, but the moment it became about using the Super Soldier Serum it actively became about supremacy and power. Karli doesn’t even show remorse for the fact that she kills several innocent people, and calls them cogs of the machine she wishes to attack. No amount of noble intention redeems evil actions- our character is defined by our actions after all.
Erik Killmonger, Karli Morgenthau, Magneto- they are all the different examples of this same archetype, and it is crucial to understand the message that comes with them. It is easy to succumb to the darkness. The darkness engulfs you, and it’s easy to stumble, fall, and get lost in it. These characters- they faced the darkness, and didn’t see the light out. They faced their adversities and when the ultimate test of their character was made, they were found wanting. It is easy then to empathize with that. It is relatable because in our own lives there are moments where we feel the same way, but the story of the hero is about the light. And while a hero may embody some relatable features, their purpose is never to embody who we are, but what we could be if we pushed through the dark and went to the light. They are manifestations of our untapped potential if only we are able to face our adversity head on and push through. Frankly, after seeing the comments made by Jordan and Kellyman, I feel like this archetype needs a break. Go back to basics, villains just being easily defined for their pure intent of wickedness, because debating whether or not a character who literally stands for supremacy, fear, and hate is a villain or a hero because he had some reasonable points and a harsh upbringing is something I am done discussing.

Anyways, this is my first post of the new year, I hope you have enjoyed! I have a lot more to come.