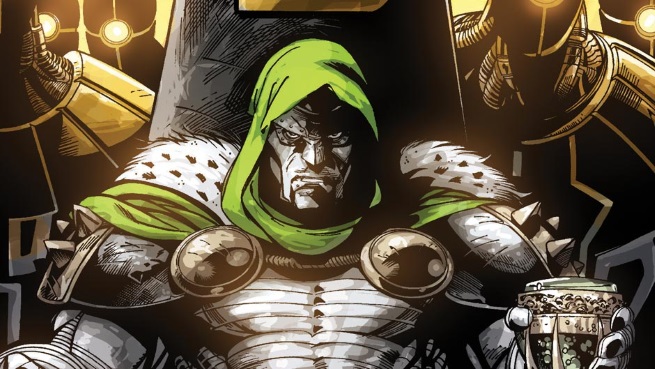 Next weekend, Doctor Doom will make his third official big screen appearance, played by Toby Kebbell in Fantastic Four. With that in mind, here are some reading suggestions for those interested in learning more about the character, either before or after seeing the film.

As Doom’s legend has grown over the years, it has also became more and more fantastic (for lack of a less pun-worthy term). He’s a master scientist, but also a master magician. He grew up a poor gypsy in Latveria, but also attended a U.S. university with Reed Richards. It became a lot to handle.

In 2005, Marvel gave writer Ed Brubaker and artist Pablo Raimondi the task of telling the definitive Doom origin story. The result was the Books of Doom miniseries, which framed Doom’s tale through a journalist’s profile.
Brubaker and Raimondi did an admirable job of wrangling the various disparate elements of Victor Von Doom’s past into a sensible narrative. The story follows Doom from a persecuted child in Latveria, to a boy given an opportunity in America, through a mystical journey that leads him back to his homeland. It’s a solid starting point for learning to love Doom.

Some writers portray Doctor Doom as a complex character whose villainy masks a hidden nobility. That’s not the Doom you get in “Unthinkable,” the Mark Waid and Mike Wieringo story that led into Fantastic Four #500.
Complications with Sue Storm’s pregnancy forced the Fantastic Four to seek Doctor Doom’s help in delivering Sue and Reed’s daughter. Doom ushered the girl safely into the world, earning the right to name her Valeria. In “Unthinkable,” we learn that Doom enchanted Valeria so that he could use her to spy on the Fantastic Four.

Having given up on science, Doom then sacrifices the women he named Valeria after, his childhood love, to gain enormous arcane power. And how does Doom use that power? He banishes young Franklin Richards to hell, then captures and torments the Fantastic Four. “Unthinkable” is Doctor Doom at his worst.

The original Secret Wars series pit the heroes and villains of the Marvel Universe against the manipulations of the all-powerful Beyonder. The mighty Beyonder meant for the heroes and villains to battle each other, but Doom chose his own path. Doctor Doom took matters into his own hands, taking the fight directly to the Beyoder. Doom manages to the steal the Beyonder’s power, and rules over Battleworld. At first he’s benevolent, but the immense power begins to cloud Doom’s mind.

While Secret Wars is mostly a big slugfest for Marvel Comics to sell toys with, it also happened to have an interesting arc putting Doom’s multilayered character on display.

For all Doom’s evil posturing, deep down he’s nothing but a mama’s boy. After coming in second place in a contest orchestrated by some of the Marvel Universe’s top mystics, Doom earned the right to make one wish, to be granted by the contest’s winner – Doctor Strange.

He could have asked for Strange to help him conquer the world, but he didn’t. Instead, Doom conscripted Strange into breaching Mephisto’s realm in an attempt to save the soul of Doom’s mother.

The story is written by Roger Stern, and features early artwork by the magnificent Mike Mignola and Mark Badger, and is easily one of the best Doom (or Doctor Strange) stories ever told.

Marvel’s AKA Jessica Jones Gets A Synopsis Update
Could The “Hunt” Be Over?