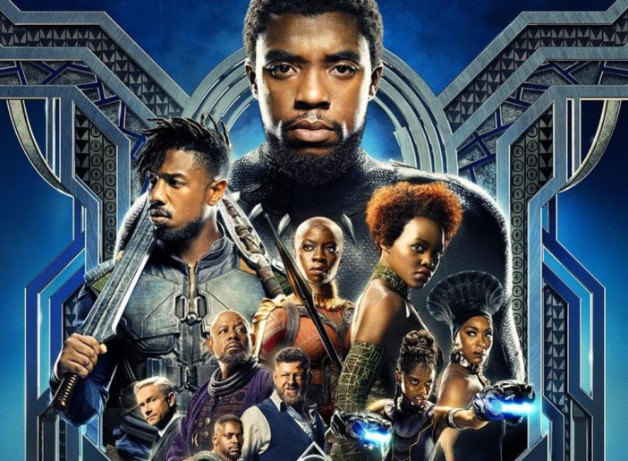 The Marvel Cinematic Universe has been going strong for Ten Years at this point. The tenth anniversary will coincide with the release of Avengers: Infinity War in a few months, but prior to this films release it is important to not neglect one of the series’ most intriguing and entertaining films.  Black Panther is the first MCU film to be released in 2018 and having seen it it isn’t too hard to make the determination that it is easily one of if not the best MCU film to date. It’s release during such a highly tumultuous time socially and it handles this with such grace that it becomes something else entirely.  It transcends the series it resides in and becomes something special and important.  There’s a lot of layers to this film, but to understand how it has done so well it is important to look at the film and see how it works not only as a part of the MCU, but also how it works as an individual film.

Here is my spoiler-free review of Marvel’s Black Panther.

The story takes place not long after the events that transpired in Captain America: Civil War. In that film T’Chaka, the African king of Wakanda was killed in an explosion at the UN.  T’Challa, the successor to the throne of Wakanda and T’Chaka’s son donned the Black Panther persona to find justice, which in the end he was able to. This film picks up from that when T’Challa is set to be the new King of Wakanda. Wakanda is the fictional Country in Africa that thousands of years prior had the fortune that a meteor carrying the strongest metal, Vibranium, landed allowing them to craft weapons and technology from said metal. It is because of their rapid advancements that they have decided to remove themselves from the rest of the World in order to protect themselves and their culture. When T’Challa is set to become the King, an old threat returns in the form of Ulysses Klaue’s greed for Vibranium and in a new threat in Erik Killmonger, who has a very personal vendetta.

The narrative is filled with many twists and turns that highlight the world and people of Wakanda. While this is Black Panther’s film the story utilizes all of its vast array of characters extremely well to tell a largely story and character based Marvel film. While action is heavily present in the film, the places where it exceeds the most is in its characters and in the narrative. These elements elevate this film beyond the norm of the Marvel Cinematic Universe. While those films are good this film is much more focused on telling a layered, but entertaining narrative with characters that are memorable in their own right.

One of the greatest aspects of the film is related to that of the characters present in the film. The cast brought these characters to life, while highlighting their individual talents in addition to the rarity in seeing a major superhero film with a majority non-white cast. Chadwick Boseman stars in the Titular role of T’Challa. His performance is one of maintaining the things that are loved about the character including his intelligence and his integrity. Second to him in importance is that of the extremely talented, Michael B. Jordan as Erik Killmonger. The MCU has been known to have many weak villains that have little to no depth to them, but what works with Jordan’s performance as Killmonger is that he is emotionally complex. There is a lot of characterization into how and why he does what he does. Without spoiling,  he is crucial to the plot and his ties to Wakanda are one of the best things in this film. Jordan highlights this with a stellar performance.  Another standout is the return of Andy Serkis as Klaue, who plays up the villain role to borderline campy effect and his presence is welcomed. Martin Freeman also returns as Agent Everett Ross in addition to the rest of the cast of Wakandans played by a wide range of talented actors and actresses including Forest Whitaker, Angela Bassett, and Lupita Nyongo. Every actor gives their all for the film and it really does show. Their passion for the project comes across in their dedication to their characters and this is easily one of the strongest aspects of this film.

When giving a look at the technical side of this film it’s easy to see why the film works as well as it does. The best aspects of the film shine through in the costumes and in the production design. Wakanda is completely different to anything shown previously in the Marvel Universe. Wakanda is a nation of incredible power and technology, but still rooted in the African traditions. It’s a modern blend of these concepts and the costumes and production design reflect that. It’s an excellent looking setting and it works in allowing you to buy into Wakanda existing within this Universe.

The cinematography is also perfectly handled with many shots looking gorgeous, which is a trait that is generally handled well within the MCU. It’s another positive for the film, but on the downside some of the visual effects in the film aren’t the best. Sometimes the CGI is a little obvious and that is sometimes distracting, but that doesn’t take away from how well realized everything else is in the film and that minor shortcoming barely has any bearing on it.

Music is also incredibly important in any film, but in this film it turns out to be one of the best aspects about it. Ludwig Gorranson composed the film’s score, which highlights the action within the film, but it also takes inspiration from African music and combines it to create something thrilling and memorable. In addition to the incredible original score, the film is comprised of some licensed tracks by many artists arranged by Kendrick Lamar. That part of the music is used sparingly and used so  well that it works within the context of the narrative. It’s a great blend of classical score with modern hip-hop that creates a sound unique to this film.

This film is breathtaking. It’s a superhero film that dares to be completely different from those around it, while still fitting perfectly within the Marvel Cinematic Universe. It’s serious tone is a breath of fresh air for a series that has often used humor as a crutch from time to time. It’s focus on deeper themes and ideologies in a dangerous world can speak to so many people and a character like T’Challa is someone that kids can look up to. Especially for those young people of color who have needed a hero while living in a world that doesn’t value them as equals. The film beautifully lifts the spirits of those that have not been given the same opportunities as white people have. This fearlessness in approaching that is admirable and with its success there is hope that more representation and change can occur because of it.

It’s a beautiful film that deserves the love and the success that it has attained and it is easily one of the best superhero films in the last several years. I absolutely recommend you go out and see it if you haven’t already.

First Official ‘Ant-Man And The Wasp’ Trailer Released By Marvel
Wondercon 2018: What To Expect & How To Prepare