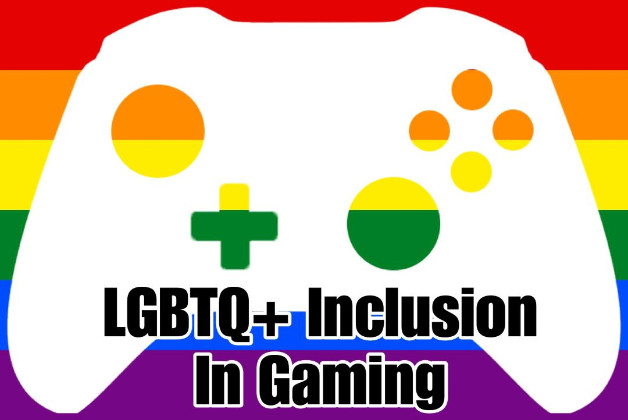 Happy Pride Month to all of our readers who fall under the LGBTQ+ community. It’s a month to celebrate the struggles and hurdles that many in this community have had to overcome and things certainly are getting better, but there is still a lot of work left to be done. One of the most helpful ways to get across equality is by the act of inclusion. Getting an opportunity to see yourself represented in a work of art is so important. It makes you feel welcome and accepted and that you as an individual matter. It’s why there is so much conversation pertaining to racial inclusion, but that is a topic for another article.

Today it’s a great time to look at the Video Game Industry and how the LGBTQ community has been incorporated into games. Sometimes games have hit it out of the park and delivered stand out characters, while in other times they have made horribly bad and stereotypical characters. There certainly is both sides to this topic on inclusion and there is a lot to cover here before we get into ways it can improve. So here’s a look into LGBT Inclusion and How it Can Improve. There is a general Spoiler Warning for some of the games I will be covering so be warned.

While nothing is perfect there have been many examples in the last couple of years that have shown incredible representations of LGBTQ people in multiple facets. As a fan of the game myself the first that directly comes to mind is that of Ellie in The Last of Us. She’s a strong, capable, and well thought out female character that you have a bond with by the end of the game, but in the DLC titled Left Behind you see her before she was thrust into the events of the main story and you see her form a healthy loving relationship with another girl. A moment that culminates in a kiss that not only works in the scene, but comes off as completely natural. Her sexuality does not define her character, but it’s just another element to what makes her so unique. This is an example of a great character all around. She has layers and often times this is neglected by Game Developers whether it be for writing female characters or LGBTQ characters.

Ellie is a great lesbian example, but another excellent example is found within the game, Gone Home. It’s a slow paced adventure game about walking around an empty, but lived in home after your character has come home from being a year abroad. Through various notes and clues you discover how the rest of the family has been dealing with you being gone, but also in your little sister’s life. You discover the heartbreaking story of her falling in love and having to come out to her parents.

She assumes it would be anger, but her parents are more so in denial calling it “a phase”. Without going too far into the story there is a lot to unpack with her character in that you don’t find out she happens to be gay until later in the story making these web of characters a fascinating journey to dive into and her story is one of Queer youth. It’s a excellent example of the feelings that one would experience coming to terms with your sexuality as a teenager. It’s a moving story with a somewhat cliche, but very well thought out LGBTQ character that people can definitely see themselves in.

They didn’t do a whole lot with him, but him being there is a testament to good representation. The same game also contains many other LGBT characters including Dorian who is a main character in the game and a character that the player has the option of romancing as a male. There is no humor to his character in that he is not a parody, but a full fledged character who also happens to be gay.

It’s also important to mention that many games give players the options to create their own character and romance anyone regardless of gender. While not a choice by the writers, it is a great and fair option for players to have. A prominent example of this would be in the Mass Effect series. The option to be and love anyone is a great tool for players to have and for the LGBTQ characters to feel included. While all of these examples are a great handful of positive examples it’s just as  important to dive into the negative side of gaming inclusion as well.

Unfortunately there has been a lot of stereotypes and other forms of insulting qualities when it comes to LGBTQ representation. One series that I quite enjoy has a serious issue with the portrayal of their characters is that of the Grand Theft Auto series. While sometimes it’s handled decently like in GTA 4’s The Ballad of Gay Tony, other times it is downright insulting. In Grand Theft Auto 5 there are Transgender sex workers. They not only are played for humor, they are blatant stereotypes and the dialogue options for them tend to fall into transphobic lines such as “Hello sir, I mean Madam”.

While the world of GTA is a great satire their representation of these Trans characters fall into the line of being insulting. Other LGBT characters in the GTA games are often not well respected either. Even Trevor, who is a highly entertaining character is bisexual. While not a bad thing on it’s own it rings back to how LGBT characters are often portrayed as villains or psychopaths.

A lot of video games often have their sexuality be a trait that a villain carries, such as Vamp from the Metal Gear Solid franchise. Even earlier than this LGBTQ villains can be traced back to Super Mario Bros. 2 with Birdo. Described in the original manual as “He thinks he’s a girl and he spits eggs from his mouth. He’d rather be called Birdetta”. While one of the first Transgender characters to ever appear in any game she was misgendered as well as put in a place as a villain. A simultaneously breakthrough moment, but also very insulting obviously created to be comedic.

These villainous characters do nothing, but present the LGBTQ people as the other. People who should be feared for their differences and not accepted for their differences. It’s harmful and while these portrayals aren’t nearly as common today it is still a big problem. Clever game developers avoid stereotypical characters and work to make them characters and not caricatures. This isn’t always the case and obvious misrepresentation comes through in a lot of ways. Things need to improve.

What Needs to Improve

The gaming community is often seen as a closed off and bigoted male centric group, which is true in some cases but gaming is so massive that everyone is playing games no matter who you are or who you love. There certainly is a domineering culture of bigoted male gamers who have influence and seeing that a majority of game developers are straight males it’s harder to find games that push the boundaries in terms of LGBTQ representation. A lot of developers don’t want to rock the boat out of fear of losing universal appeal because of bigotry, which is a serious cultural issue. Sometimes developers do utilize these characters, but force them into more demeaning roles because of their ignorance.

Some Gaming Studios are fearless in their approach. They are willing to show progressive themes and allow for broader inclusion. Some of the above games highlight this and while nothing is perfect I do have a feeling things can get better. One of the many ways that would absolutely help in having excellent LGBTQ inclusion is giving LGBTQ Game Designers the chance to craft the characters. Allow them to put their own feelings of what it’s like to be in their shoes. It’ll strengthen the representation and avoid stereotypes, which in turn could make better games overall.

There isn’t a lot of that taking place and sometimes diversity is in there to do the bare minimum without having a fully realized character even if the intent is positive. Sometimes an intentionally positive portrayal can feel wrong simply because they make their orientation the only thing about their character. There needs to be a better understanding in general on LGBTQ issues and they need to be reflected in the characters while not used as a gimmick. That line is a tricky balance, but it’s one that can easily change as long as the culture can change with it. Especially in the aforementioned male dominated gaming culture.

Inclusivity is one of the most meaningful and important things that a piece of art can do for someone who is a part of an often abused minority. It can allow for them to find inspirations for those who are like them. It does nothing but good for people and the representation needs to be handled much better. It’s a slow process that will take time and a cultural shift, but things are getting better all the time. I’ll be looking forward to the day when the lead character in a game is a well rounded LGBTQ character that breaks the mold. That would truly be something special.

Happy Pride Month from all of us at Up Your Geek!