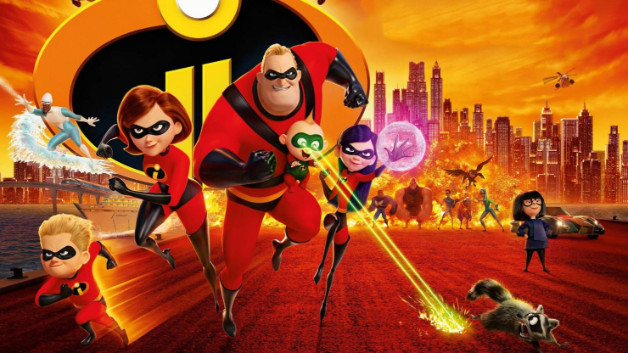 It has been 14 years since the superhero family film, The Incredibles hit the big screen. The film written and directed by Brad Bird was a groundbreaking film for Pixar being the first film to succeed in doing fully realized human characters at the center of their more mature superhero story. Bird’s writing and directing made it a completely unique experience against the other Pixar films and it easily gained an audience of people who adored it. There have been a few sequels to Pixar films and fans wondered why The Incredibles didn’t get a sequel. In recent years the Superhero genre has taken off with many hit films. The genre is filled with heroes from all Universes, but original superheroes in films are harder to come by. It is the perfect time to follow up The Incredibles with a sequel. With Brad Bird returning to continue his vision, Incredibles 2 has landed in a spectacular fashion. It’s hard to follow up a film that has gained such a loyal fanbase and they are eager to see if it lived up to the anticipation. As a fan myself the film has certainly lived up to the title of “Incredible”. Here is my spoiler-free review of Incredibles 2.

Without going into spoiler territory the film follows the Par family right after the events of the first film with them facing off against The Underminer. After their battle with him a plan is set into place to bring superheroes back into the spotlight and push for the reinstatement of their legal status. Elastigirl is the perfect model for putting a positive spin on superheroes and she’s chosen as the first hero to go back into action, while Mr. Incredible has to adjust to taking care of the kids. The two of them have areas to adjust to, but when a super villain known as the Screenslaver appears it’s up to Elastigirl to figure out who this is and how to stop this villains’ reign of terror.

The plot of the film takes off where the last film ends and runs with it in a clever way. It’s not the most intricate of plots, but it ends up working extremely well to deliver more of the same as the first film. It’s not nearly as groundbreaking, but it’s not supposed to be. It really benefits from the superb writing of these excellent characters mixed with a good amount of humor and action that is to be expected. The film is a fun return to one of my favorite Pixar films and it does so with ease. The narrative unravels  naturally and nothing comes off as forced. They could have easily forced some callbacks to the first film, but the plot is accurate to the world and characters and avoids many traps of sequels trying to reclaim the magic. The plot is a big part as to why this film works so well.

The film is impossible to bring up without discussing the mastermind behind these films and that is writer/director, Brad Bird. Bird’s work includes The Simpsons, but he also is responsible for one of my all time favorite films, The Iron Giant. Bird is excellent at handling humor as well as character development and The Incredibles films are excellent examples of this talent. Having this film come from the mind a single person has allowed for it to have a singular focus and narrative, which Bird directed beautifully. His vision is ever present in the film including his apparent love of 60s era spy films as well as superheroes. Bird’s leadership is felt and it’s why the film works as well as it does.

The voice cast for the most part return to all of their roles and it feels like they never left it. While 14 years has gone by the actors bring all of their characters to life. They all fit the roles well and the characters’ narratives benefit from having such talent to voice them including the return of Craig T. Nelson as Mr. Incredible, Holly Hunter as Elastigirl, and Samuel L. Jackson as Frozone. In addition to the returning cast there are some new stars who bring their talents including Bob Odenkirk and Catherine Keener. The entire cast is made up of great talent and it brings the film together extremely well and helps to elevate the material.

On the technical side of the film the animation is beautiful. It’s been a long time since the first film was released and digital animation has made massive steps in improving. While the original film still looks great it does have rougher edges. What works so well about Incredibles 2 is that it visually lines up perfectly with the first film while making some major improvements in animation. It’s never distracting in it’s differences and that works in its favor. It feels like a natural step up without changing so much. Incredibles 2 is a beautiful looking film with such great aesthetic in the environments including the nostalgic 60s era tone it’s going for. The cinematography in how scenes are structured is just as brilliant and it is able to handle the humor, the action, and even sometimes the suspense extremely well. This is certainly some of the best work Pixar has done in that it feels completely unlike any of their other works. It definitely has a style that is unique to it and it leans into it with the use of incredible visuals and cinematography.

The sound doesn’t take a hit either in that the same composer, Michael Giacchino returns for the sequel. His music is a perfect companion to the nostalgic tone the film goes for and it gives even more legitimacy to it being a direct sequel. The music perfectly blends into the film and works at every moment. In addition to the music the sound design is also great blending the more cartoon like silliness in certain scenes with the action sequences which do a great job at keeping you on the edge of your seat. The sound design and music is perfectly handled in the film and definitely deserves as much recognition as the writing and directing.

The film is a fantastic continuation of the series. While it’s not nearly as groundbreaking as the first film it still feels like a worthy sequel and I’d go as far to say that it’s just as good as the first film. Pixar has some great talent working with them and if they give more unique writer/directors like Brad Bird an opportunity to create something unique then they will have many great films in the future.  If you loved the first film then you will definitely love this film. I highly recommend it.

LGBTQ Inclusion In Gaming & How It Can Improve
Retro Review: ‘Metal Gear Solid 4: Guns of the Patriots’