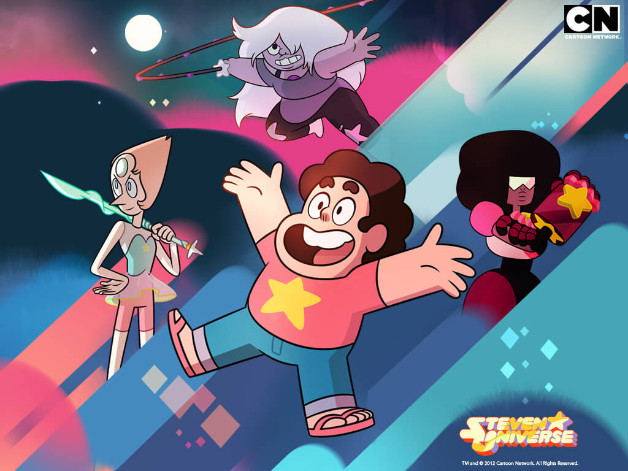 The way in which the landscapes of animated programming meant for families or children is certainly shifting. While there is a lot of shows that aren’t challenging and made purely for entertainment there are also other shows that are actively working to subvert expectations and deliver something unique. Steven Universe is an animated and often musical series that tells the story of a boy named Steven who lives with a group of superpowered women known as the Crystal Gems.They come from another planet and their mission is to protect the earth in the name of their fallen leader, Rose Quartz who so happens to be Steven’s mother. Steven Universe is one of the most popular animated shows on television and there are many reasons why this is the case. There is the simple fact that it is an oftentimes funny and exciting show with great characters and stellar writing, but underneath all of that are the intricate themes present. The series does all it can to subvert what’s expected and it focuses on making narratives that highlight these themes in ways that are easy to understand, but acknowledges the complexity of these issues. It perfectly puts its themes at the front while also making sure to maintain an extremely positive and light feeling about it that truly resonates with it’s fans. It’s one of the best shows on television and deserves to be recognized for being more than just a family show. It’s an experience that is working to break ground. The majority of these observations will be Spoiler-Free, but there may be a few very Minor Spoilers.

The biggest and most ever-present theme and element is the inclusion of multiple LGBTQ+ characters. The series may be one of the most progressive shows in that most of the characters and relationships are not straight, which is refreshing to see. The gem, Garnet is revealed to be a fusion between two gems. A fusion is when two gems are so in sync that they create a new identity that is a combination of both and Garnet is quite literally a fusion between two women who love each other in a romantic way. The Gem known as Pearl is constantly shown to have deep feelings for Rose. She served by her side for thousands of years and her love and appreciation grew. Pearl never was able to show her love for Rose and Rose ended up in a relationship with Steven’s father, Greg. The feeling is beautifully summed up in the song, “It’s Over isn’t it”.

These two instances are just some of the relationships highlighted on the show, but these characters are crucial to the narrative and they don’t fall into straight roles. Their love is treated equally as any other love and they are never made to feel or be shown as anything other than normal. This is an incredibly powerful theme to carry over into what is typically known as a family show. The inclusion of LGBTQ+ characters in a series that many children will watch sends an extremely positive message that this is normal. That this is what it’s supposed to be. It’s a big reason why the LGBTQ+ community embraces it. It’s boldness in expressing varying sexuality as normal  is a huge step in inclusion, which is something I’ve discussed previously and have been advocating for.

The series is dedicated to expressing diversity of all kinds on all aspects. Whether it be diversity in age, race, body type, gender, sexuality, and identity the show gives everyone an equal voice and no one is put into any sort of box. While Steven and Greg happen to be white characters, the rest of the gems are colored based on what gem they are. The Gems come is all shapes sizes, colors, and personalities. The varying types of people are on constant display and their essence is never questioned. Looks are never treated as a determining factor to who the character is and how they fill their role. Every character is praised for their unique attributes and while there are certainly evil and intolerant characters, the main characters of the show fight for equality and they embrace everyone. Steven even goes out of his way to show how much he cares about everyone regardless of who they are and villain characters are given the space to learn and be embraced.

In addition to the series having a diverse set of characters and identities, the behind the scenes is also filled with a diverse group of individuals with the voice cast being mostly made up of female people of color.  It’s a rarity to have such diversity among the cast and crew that this is hopefully a great sign not just for animated shows, but for entertainment in general.

The biggest and most constant theme presented on the series is that of Love. Love fuels everything and every character. It is at the heart of the central conflicts. It is ever present between the characters. It is presented in multiple levels and types of love and it never leaves. The beauty of the series is not that these characters love , but in how they do it. The main and most constant form of love present is in familial love. It depicts all of the Crystal gems and Steven being a part of a family. Familial love is a strong component. It binds the gems together and their individual traits that make them different bring them together as well. Familial love is something that is highlighted beautifully on this series.

In addition to familial love it often presents romantic love. Romantic love plays a big part of the series. I mentioned that many of the characters aren’t straight and their love plays out not for sensationalism, but naturally as a result of the characters. The relationships are treated as equally and romantic love is often put on a similar pedestal to the mutual love the characters have for one another. This circles back into love between friends as well seeing as Steven is the single most loving character on the show similarly to that of his mother.

One of the most prominent aspects of the series in how maturely it handles emotions. Emotions are at the heart of the series. While emotions are a cornerstone to good fiction, Steven Universe uses its status as a family series to show examples of how to be healthy regarding your own emotions especially in regards to relationships whether it be romantic or not. The character of Lapis Lazuli is one of the most introverted and distant characters, but a big part of that comes from her being forced into fusion with the Gem, Jasper. This forced relationship is indicative of abusive relationships in a way. It explores the level where love is overshadowed with control. It’s rare to have a series that reflects abuse in this way and handled on a show mostly intended for family. The emotional baggage of this is still felt in the characters up to this point in the story, which is truly groundbreaking in an animated show for cartoon network.

Another theme that is challenged and brought forward is the representation of masculinity. It’s hard for me to think of a male hero character who is willing to not only wear his emotions on his sleeves, but also express himself in multiple ways. Steven is a boy who is the hero of the show and how he shows his bravery is not in how good a fighter he is, but in his love for others. His love is the driving force of who he is and he has the rare gift of changing people because of his positive attitude. Masculinity is often portrayed as how tough an individual can be, but Steven is a male whose strength comes from the heart. He is allowed to cry and that doesn’t weaken him. It strengthens him and it’s seen as normal. This is such a powerful message to send. It challenges toxic masculinity and presents emotions and love with respect for others as a healthy and crucial means to living your life to the fullest.

The healthy attitude toward expressing emotions in all aspect is a unique trait that this series expresses in such a beautiful way and certainly subverts a lot of expectations.

Steven Universe has quickly became one of my personal favorite shows. The overarching themes of love, diversity, and expression of feelings sets a precedent for how family cartoons can be handled. It’s unique lightheartedness and sweetness while tackling complicated issues resonates with so many fans and it is extremely refreshing. It’s outlook  of hope and positivity speaks volumes when the world is so often filled with such negativity. If you have yet to experience this series than I hope my analysis of it’s qualities has convinced you to at least give it a shot.