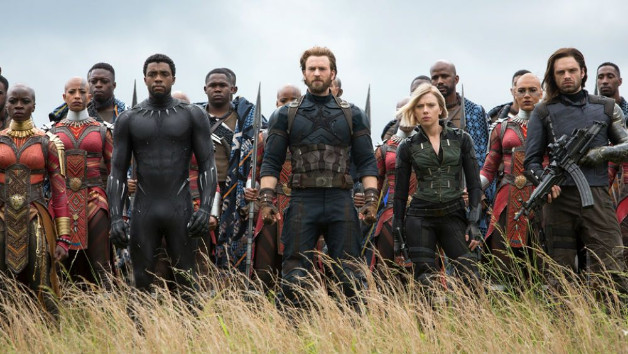 2018 was another brilliantly chaotic and fascinating year not only in the perspective of the World itself, but in terms of film, art, and content for Up Your Geek. I had the incredible opportunity to join the Up Your Geek family to bring my own perspective onto this lovely website and to contribute during some of the most exciting times for Geeky content in recent memory. It was an excellent year that had some major victories for representation in media as well as staying true to what makes great geek content work. With this in mind it is a perfect time to look back at 2018 and analyze 3 major films made the biggest and geekiest impact on our great website and on geek culture. These films not only secured the biggest hits for the site, but they also gained the most widespread acclaim within the subgenre of Geek Cinema. Let’s ring in the New Year by looking back at what 2018 did for all of Geekdom.

It seems as if every year more and more superhero films are finding their way onto the big screen. Each year more studios are filling in release dates with superhero properties because it is a proven subgenre that makes studios money. While this may be true it is important to connect with why superhero films are successful and at times it is very important to push the subgenre into more important directions. Marvel Studios hit the ground running this year with one of their most successful solo films to date, Black Panther.

This film not only was a smash hit at the box office, but it also has received widespread acclaim and has become the first superhero film to be nominated in the Drama category for the Golden Globes. That is no small feat. It’s incredibly impressive and while it may be a fun superhero film with elements of darker themes it also represents something bigger. It represents the need for people of color to be allowed to be leads in major genre films. The majority of well known films with black leads deal with historical events and race relations. It is refreshing seeing a superhero film have a mostly black cast doing something different. It was incredible seeing people of color in such an important role in film and it was incredible to see children look up to a superhero that finally looks like them. That is an incredibly powerful statement not only within geek culture, but also within society as a whole.

I authored an article discussing this when I first joined the site and I was incredibly happy to explain why this film was such an important step for representation because it really matters. The film deserves to be recognized for its place of inclusion, but it also deserves recognition for being a highly entertaining work of superhero fiction. It was so popular that in a lot of ways defined 2018 at the very beginning. It was a huge win and definitely deserves to be noted when looking back at 2018 Geek Films.

Marvel Studios has been carefully crafting an interconnected Universe for it’s characters for over 10 years starting way back in 2008 with the original Iron Man. Since then each film has built upon the World building and introduced characters that have become cultural icons. Every year of those 10 years was dedicated to doing new things in the Universe and because of that people were excited to see when they would finally merge the entire Universe together. In 2018 we finally got to see what the past 10 years was pushing to. Avengers: Infinity War was released and delivered on making one  of the most interesting and darkest films that the MCU has made so far. This film deserves dissection.

Avengers: Infinity War gave audiences the ultimate villain in Thanos. We had seen Thanos appear in a few of the other MCU films, but his presence was never really felt until this film. His villainy unlike the comics is much more of a rational approach. He’s driven by a desire for making the entire Universe better, but by culling it. Which in and of itself an insanely evil stance, which gives the heroes something great to fight against. A villain with a twisted sense of morality made this film as interesting as it was in addition to the joy of seeing heroes fight together for the first time. This universe had been building toward an ultimate climax for some of these characters. It was inevitable that a big portion of its success was to see where it takes these characters and how the film will shape their future experiences in future films or if they would even live to see another film.

The film was not only a critical success, but was also financially successful and many moments from the film even became iconic. The film’s infamous “snap” has remained relevant in the eyes of the public for quite some time after the movie was released and rightfully so. Without spoiling the film had one of the most shocking moments in any superhero film and that moment definitely deserves to live on as one of the best sequences in the medium. The film itself was an incredible feat of pulling off the near impossible. It didn’t feel weighed down or bloated and it could have easily suffered that with the immense amount of characters at the filmmakers’ disposal. The Russos were able to make a well balanced and exciting entry into the MCU franchise. That definitely deserves the recognition in addition to this film being one of the most popular films we covered here on Up Your Geek.

Spider-Man: Into The Spider-Verse

The final film that deserves 2018’s attention could easily be one of the greatest superhero films to date. Spider-Man: Into The Spider-Verse is a rare film that takes the beauty of animation and bends it to do new things within the medium and tell a story that is gripping. This film is a more complex and mature take on a Spider-Man narrative and serves as a tribute to everything that has come before it. While we may not have discussed it a whole lot on this site it is a landmark film for 2018.

One of the articles that I am most proud of working on here for the site is my article on the need for more Mature Western Animation. In that piece I called for a change in how Animation is viewed in the West. We tend to paint animation with a very dismissive generalization, which often puts animation down and referring to it as purely for children or for comedy. While many works have proven this wrong in the West it is still rare to see an animated film do more and push beyond the limits of the medium. Spider-Man: Into the Spider-Verse does just this. It used newer animation techniques to tell a story with layered emotional resonance as well as vibrant comedy and action. In all purposes it is a superhero film, but not what audiences are used to. It’s a loving tribute to Spider-Man and may be one of the most important superhero films in recent memory. It’s critical acclaim is something that should not be overlooked and it deserves to be examined for years to come.

The film was incredibly impactful for a lot of people including fans looking for a more comic accurate portrayal of these characters in addition to those looking for something new for American animated films. It was also incredibly diverse regardless of it being in animated form. It’s a powerful film that highlights the best traits of 2018 as a year. It most certainly deserves all of the praise it has been given and then some.

While 2018 may have ended, giving this opportunity to look back at the year and analyze which films impacted us the most was something that has been important moving forward. The three films all did something special for different reasons. Whether it be Black Panther’s statement for diversity, Avengers: Infinity Wars’ culmination of 10 years of narrative, or Spider-Man: Into the Spider-Verses’ focus on pushing the boundaries of animation for the West. Each of these films played a part in shaping 2018 and they each definitely deserve to be remembered not only for the place in this year, but also for their part they played in changing Geek culture for the better. I hope that 2019 is filled with as many game changers and that Up Your Geek will get to cover them all in just as much exciting detail as we always have. Thank you for helping make my first year with Up Your Geek something incredibly special and I hope to continue making content that you all love and engage with.