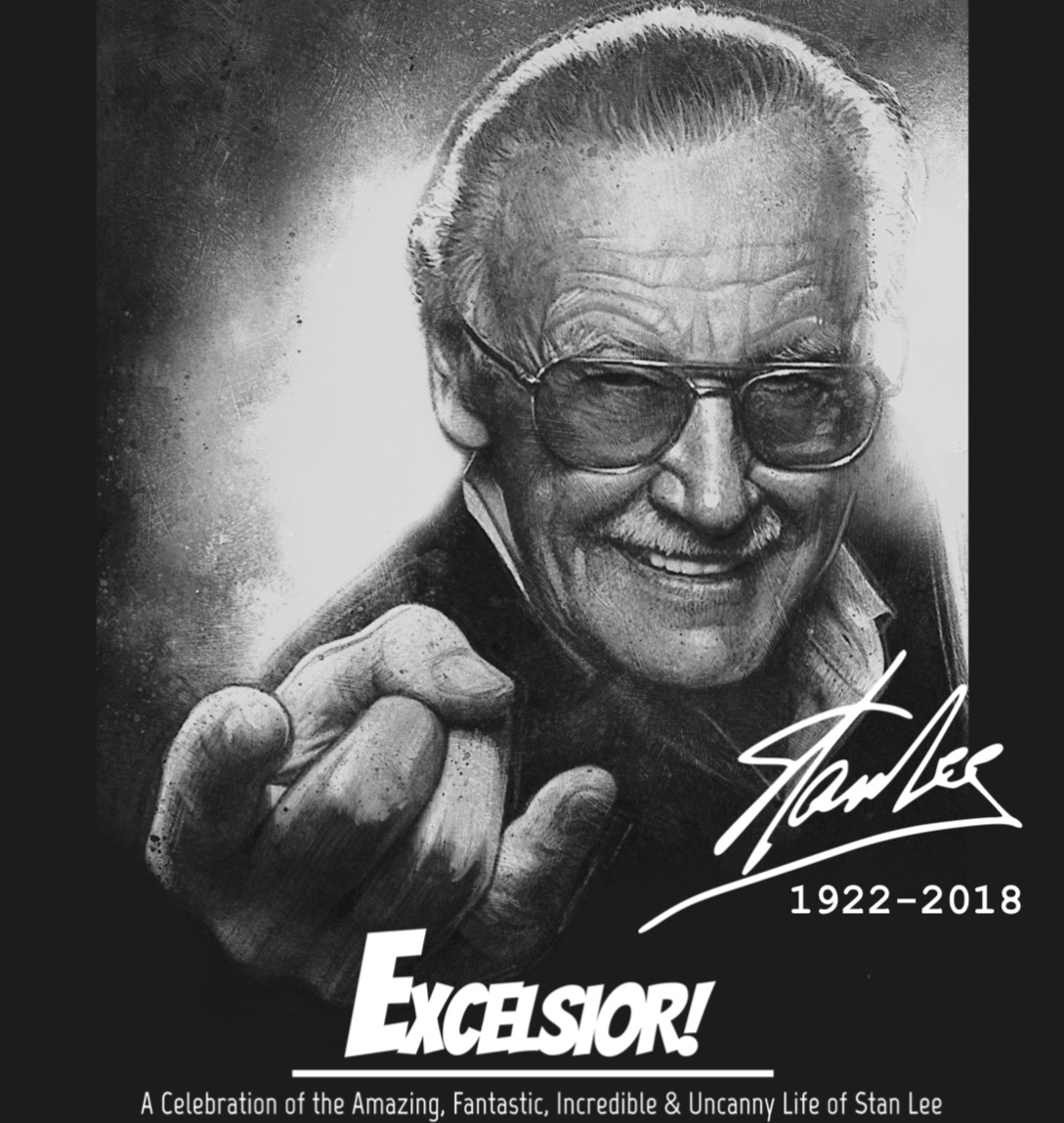 Hollywood, Calif. – January 9, 2019 – Kevin Smith, Legion M and Agents of Mayhem in partnership with Stan Lee’s POW! Entertainment today announced “Excelsior! A Celebration of the Amazing, Fantastic, Incredible & Uncanny Life of Stan Lee,” a tribute event for Stan’s friends and fans to memorialize one of the greatest storytellers of all-time, and benefit one of Stan’s favorite charities: The Hero Initiative.

Fans wishing to attend “Excelsior! A Stan Lee Celebration” can get a limited number of tickets which will be available beginning today, Wednesday, January 9, at 5 p.m. PST / 8 p.m. ESTat legionm.com/stantribute. All net proceeds from the event’s ticket sales will go to the non-profit charitable organization The Hero Initiative, a charity supporting comic book creators, artists and writers in need.

The tribute event on Wednesday, January 30, will begin with a public appreciation of Stan’s life and work at Hollywood’s iconic TCL Chinese Theatre forecourt that will feature fan-favorite speakers, an art exhibit celebrating Stan’s legacy by famed pop-culture artist Rob Prior, select costumes and props from Stan’s cameos and creations, a musical performance and a special moment of remembrance centered around Stan Lee’s hand and foot imprint. After a red carpet arrival of guests, the evening will proceed with a private tribute inside the IMAX Theatre hosted by one of Stan’s biggest fans, Kevin Smith.

Kevin will moderate conversations with celebrity speakers from the entertainment industry such as Mark Hamill, Rob Liefeld (Co-Creator of Deadpool), Michael Uslan (Executive Producer, “The Dark Knight”), Vincent D’Onofrio, RZA, and Tom DeSanto (Producer, “X-Men,” “Transformers” franchise) among others who will share their favorite memories and personal stories of Stan.  The evening will be rounded off with video tributes and live performances of Stan’s favorite music and poetry.

Kevin Smith on Stan Lee, “Thank you, Stan, for making me not only the boy I was but also the man I am today. You had great power and you always used it responsibly, fostering billions of dreamers who all know your name – a name written in the stars for all time. You were not just the literary titan of comic books, you were our modern-day Mark Twain.”

The tribute event is being produced by fan-owned entertainment company Legion M, which is revolutionizing the way entertainment is made in Hollywood by uniting a growing fan community of 50,000+ members, including more than 10,000 fan-owners. In addition to producing film and television projects, Legion M organized Stan Lee’s hand and foot imprint ceremony at the TCL Chinese Theatre in 2017. Legion M is producing the tribute with the production and consulting company Agents of Mayhem whose founder Darren Passarello worked for Stan for several years.

Scott D. Williams, CEO of Stan Lee’s POW! Entertainment said, “We are honored for this chance for Stan’s fans and friends to come together in a celebration of his remarkable life. Despite his passing, Stan’s name, work and legacy will continue to flourish and be revealed to the world. We are committed to honor Stan’s extraordinary life and work.”

Gill Champion, Stan Lee’s partner and confidante for over 18 years, said, “Stan was a unique and unforgettable human being, truly adored worldwide. He loved coming to work and creating endless new ideas and stories and in spite of his genius he was a relatable and kind man that his admirers could relate to with ease. He will be dearly missed and his legacy will live on now and for many more generations to come.”

Producer of the event David Baxter, VP Development at Legion M, writes, “Stan Lee played a major cameo in all the lives of the fans he loved, be it through his writing, his acting or his personal interactions.  We feel this tribute is a perfect opportunity for Stan’s beloved fans to unite with celebrities and friends of Stan to give the man the grand sendoff he deserves.”

Agents of Mayhem founder Darren Passarello, who got his start in entertainment from Stan and is also co-producing the event added, “Stan saw the good and the potential in everyone he met, and he never hesitated to help them if he could.  It is not only an esteemed privilege but a personal honor to be a part of this tribute.”

The head of The Hero Initiative Jim McLauchlin knew Stan for decades and said, “Stan believed in the ‘golden rule,’ and always went out of his way to make time for others and make their day just a little bit better. I think this tribute is absolutely in that spirit, and a great chance for fans to get together, share their love for Stan, and find strength in that.”

Producers of the tribute event plan to announce additional details for the event soon via social media feeds. Details of specific speakers, performers and other activities will be shared on the social channels for Kevin Smith, Legion M, Agents of Mayhem, and Stan Lee’s POW! Entertainment. (@TheRealStanLee, @ThatKevinSmith, @LegionMofficial, @AgentsofMayhem).

Starting with CLERKS, Kevin Smith has been making movies, TV, live shows and podcasts for 25 years now. He almost died recently but it was only a passing thing.

POW! Entertainment Inc. is a multimedia company founded in 2001 by the iconic comic book creator Stan Lee  with his friend and business partner Gill Champion, who is the President today, to create and license intellectual properties for entertainment media, including: feature length films, television, merchandising, branded content and other related ancillary markets as well as exclusively maintain and protect the ownership of his name, likeness, voice, trademarks and publicity rights throughout the world. POW! Entertainment was acquired by Hong Kong-based Camsing International Holding Limited, one of China’s leading brand licensing, entertainment, marketing and promotion companies, in 2017. Under new leadership, another original founder and industry veterans from Marvel and MGM, POW! is working with top writers, artists, animators, filmmakers and actors to extend the legacy of the greatest storyteller of our time.

Legion M is the world’s first fan-owned entertainment company that is revolutionizing the way entertainment is made in Hollywood by uniting a growing fan community of 50,000+ members, including more than 10,000 fan-owners.  Through its Fan-Owned business model, Legion M invests in a diverse slate of original projects in various stages of development, including the feature film and comic book Girl With No Name; multiple original television series including “Evermor,” “Airship Cowboys,” and “Malice;” as well as interactive and VR-based projects, including “ICONS: Face to Face” starring Stan Lee and Kevin Smith.  Legion M also invests in partner productions, including the critically acclaimed Colossal, starring Anne Hathaway and Jason Sudeikis, and directed by Nacho Vigalondo, the cult hit Mandy starring Nicolas Cage and directed by Panos Cosmatos, and Bad Samaritan starring David Tennant and directed and produced by Dean Devlin.  Legion M and its fan community has produced high-profile events honoring some of the industry’s biggest names, including the Stan Lee hand and footprint ceremony at Hollywood’s TCL Chinese Theatre in 2017.  To learn more about Legion M and become a member of the Legion for free, visit www.legionm.com.

About Agents of Mayhem™

A production and consulting company founded by a dynamic force within the entertainment industry with over 16+ years’ experience working with the world’s biggest brands. A.O.M’s mission is to create exceptional and original content, through it’s creative studio arm New Yorkie Studios™ which serves as an incubator for content, by showcasing talent, skills, and passion of celebrity and non-celebrity creators. A.O.M focuses on development, content strategy, creative consulting, and distribution. (www.AgentsofMayhem.com)

About The Hero Initiative

The Hero Initiative is the first-ever federally chartered not-for-profit corporation dedicated strictly to helping comic book creators in need. Hero creates a financial safety net for yesterday’s creators who may

emergency medical aid, financial support for essentials of life, and an avenue back into paying work. It’s a chance for all of us to give back something to the people who have given us so much enjoyment.

Since its inception, The Hero Initiative has had the good fortune to grant over $1 million to the comic book veterans who have paved the way for those in the industry today. For more information, visit www.heroinitiative.org or call 626-676-6354.

For more information, please visit us at www.heroinitiative.org.