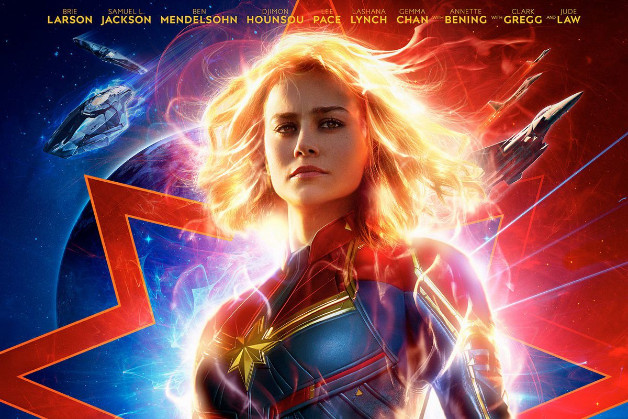 The Marvel Cinematic Universe is entering its Eleventh year as a forced to be reckoned with in the World of superhero cinema with countless entries under their belt and the popularization of previously underappreciated Marvel heroes. The series established the interconnected universe concept and they have been successful at doing so ever since. 2019’s first entry on the film side of the MCU is something a bit different. Captain Marvel is the first female led hero film that they have taken on. They have had female heroes in their films, but they always were introduced in another heroes films or in an Avengers film. This time marks her first appearance in the Universe and the film brought a lot of expectations in addition to a fair amount of controversy. Regardless of the atmosphere around the film the most important thing is the quality of said film and whether or not it is worth the price of admission. I was hoping to have a good time with the film and it did deliver that, while also not landing everything. Here is our Spoiler-Free review of Captain Marvel.

The plot of film is set in 1995 and revolves around Carol Danvers who is the member of a Kree military team known as Starforce. A team that is on a mission to end the Krulls, which are a shapeshifting groups of Aliens that are in an all out war with the Kree. The battle soon finds it’s way on to Earth where Carol has to try to remember her past while working with a young Nick Fury to put an end to this intergalactic war that they are caught in the middle of. It’s up to Carol to find out the truth of her past, master her newfound powers, and intercept the capture of a technology that can shift the tides in this War.

The film certainly does a good job at throwing out story elements that are contingent upon at least a basic understanding of the Marvel Cinematic Universe. There are references to alien races such as the Kree and the return of major characters such as Nick Fury and Phil Coulson. These elements help keep the film grounded in the Universe and they are by far the most fun parts of the plot, which is overall pretty serviceable. The story has some decent twists and turns, but it also falls into the trap that a lot of other films have done before. It still works well enough, but it also doesn’t stand out as much as I’d like it to have. This isn’t to say it’s bad in any sense, but it is one of the weaker elements in the film. It still does a great job relaying their narrative and using the time period it’s set in to do things that have yet to be seen in the MCU in addition to the good use of comedy sprinkled throughout.

Captain Marvel is inherently a sequel in the long line of Marvel films that have come before it and with that comes their unique method of acquiring talent for each of their productions. The film was written and directed by Ryan Fleck and Anna Boden. The team responsible for a handful of small projects including 2010’s It’s Kind Of A Funny Story. It’s an interesting take to use individuals who haven’t worked on a big action spectacle before, but it’s not the first time that Marvel has done this. They also did this most recently with Taika Waititi for Thor: Ragnarok.  With this being said this team did a good job bringing the world and the characters to life. The history of mostly character based films in their background shows in Captain Marvel and those moments tend to be some of the highlights of the film. With developing characters it is also important to have a cast that can competently play their roles well and the film has this.

The cast is one of the most well loved aspects of the MCU. The characters they have portrayed in addition to the actors they have chosen has always been great and this film is no exception with Brie Larson filling in the role of Carol Danvers in addition to Samuel L. Jackson returning to portray Agent Nick Fury. These two are great together and some of the best moments is when they are working together. They both compliment each others performance and while I do think that Brie’s performance can sometimes come across as flat she also can be charismatic in her portrayal. This film’s depiction of Fury is a softer one and Jackson does a good job at playing a more green version of the character we know and love. Ben Mendelsohn and Jude Law also give great performances respectively as well even if they don’t have the same amount of screen time that Jackson and Larson have. The cast features a number of talented individuals and in the end they help make the film even better just by the presence they bring to their roles.

This film in particular has the same quality that many MCU films have in terms of production design and aesthetic. The film’s cinematography does a great job at showcasing the sequences in space and on earth in 1995 visually. Some of the most convincing sequences in the film are the scenes on Earth in 1995. I appreciated the attention to detail in the production design  with retail locations,the cars used in chase sequences, and some very sly references to films from the 90’s including Independence Day. The film made Earth feel like it did in the 1990s very well and it also handled that juxtaposition with the cosmic elements of the Universe well. The film from a cinematography perspective looks good in general albeit the film sometimes struggles with color grading like in some of the other MCU films. Regardless of some of the minor issues the film on the whole is competent enough that none of the CGI utilized stands out as bad and that each technical aspect works together well.

In addition to the visuals, the music plays a big part of any film. I found that the score composed by Pinark Toprak was often times forgettable and faded into the background as opposed to the licensed music that was chosen for the film. The licensed music included some of the greatest pop and rock hits from the 1990s and it made the film stand out musically from many MCU films other than the Guardians of the Galaxy films, which very prominently used licensed music. The music is just one part of the multitude of aspects that make the  overall film competent in it’s delivery. While it is nothing spectacular, the technical aspects are good enough to provide a convincing narrative within the MCU’s framework.

Captain Marvel is a film that has already been incredibly divisive for a multitude of reasons, but counting the movie on its own merits I think that it is fair to say that it is a fun blockbuster movie with some faults. If you enjoy the Marvel Cinematic Universe as much as I do I believe that you will enjoy the film as it delves into an era that hadn’t really been explored in this ever growing and expanding Universe. It is a film definitely worth seeing for those elements alone in addition to the inclusion of a strong female presence within the MCU.