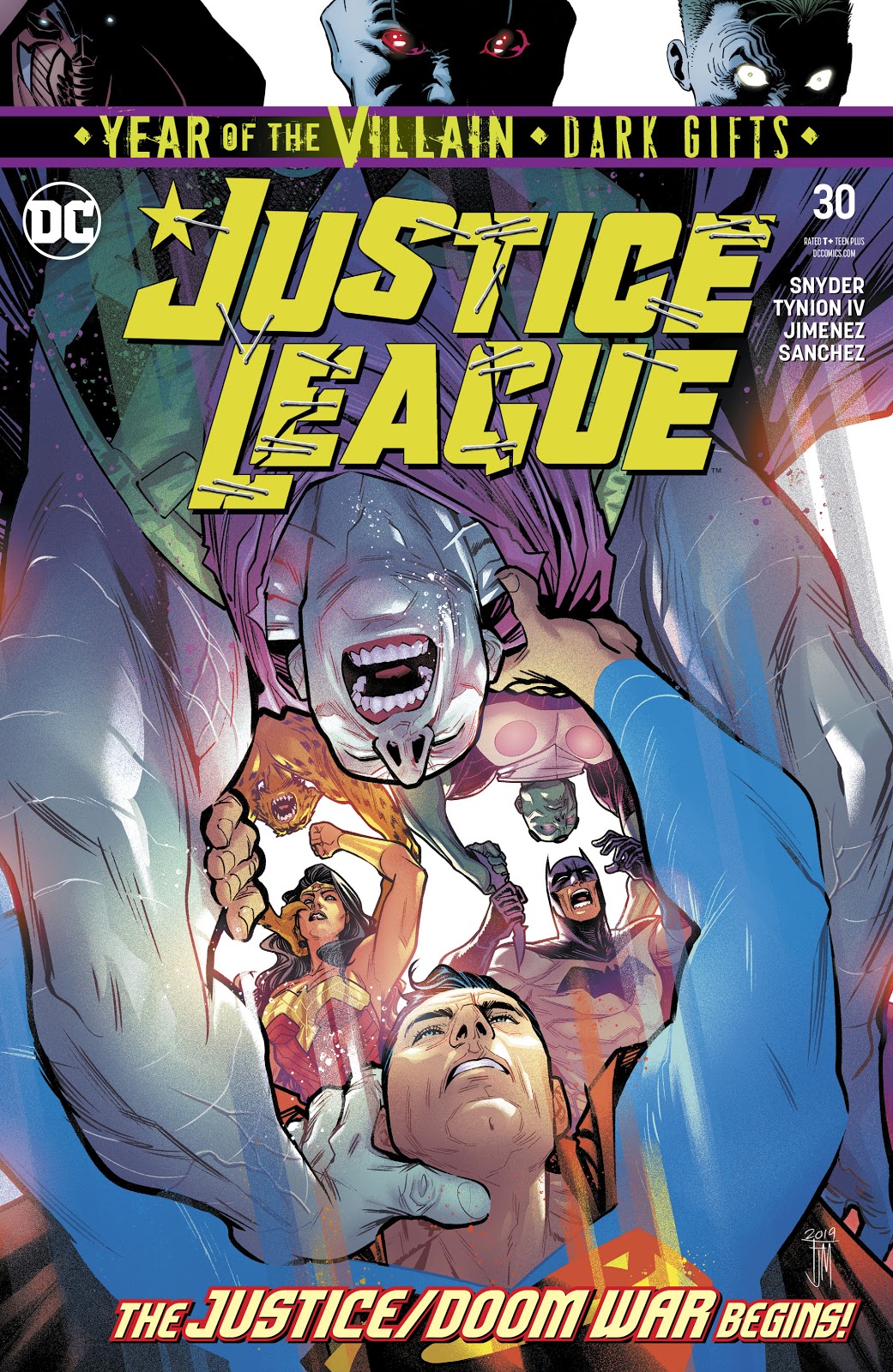 Another Wednesday, all New Comics. Today we have some titles ending August in a blaze of glory! Absolute Carnage drops its second issue, further spreading the chaos that is Carnage, then the beginning of the Justice Doom War in on the way over in Justice League #30 and more in this week’s NCBD from the Big Two.

The Carnage event ramps up with today’s issue and it’s getting pretty dark…..red. The whole event and it’s tie-ins so far are very focused on setting up this dark atmosphere of dread that obvious when it comes to the character of Carnage. He’s the very embodiment of existential dread and he wishes nothing but to create chaos in the world and so far the city of New York is the first victim. Donny Cates is doing his best when it comes to the Symbiote lore. The art is also top notch with Ryan Stegman’s visuals adding to the horror unraveling in the MU. Definitely pick this up if you can!

The aftermath of “The Batman Who Laughs” miniseries leaves the DCU in a pretty sticky place. The potential of several superheroes being infected by TBWL(The Batman Who Laughs) is massive and it’s up to Batman & Superman to once again to team up and work the case. Joshua Williamson is best known for his current Flash run and he transitions into writing Batman and Superman very well,. I may say he should probably write them more often which I’m thankful for this series for providing in the issues to come.

Out of the three tie in issues that come with Absolute Carnage today, I feel this issue is the best one to talk about. Miles Morales gets caught up in the chaos that is rampaging across NYC. Also involved is Scorpion, a childhood favorite of mine since the days of the Spider-Man game on N64. I had fun with this one and think it’s worth picking up more than the other two but that’s up to you, the reader.

It’s all been leading to this, this showdown between the forces of Justice and Doom begins in Scott Snyder’s highly epic run. For over a year, this title has been building up to the inevitable confrontation between the Justice League and the Legion of Doom and it’s now that we see this war will not be won easily. The entire story has shown the League to take a few losses along the way, proving that Lex Luthor has finally come up with a plan to defeat Superman and his allies. With Luthor offering almost every villian an upgrade over the last month, the side of Doom is poised to take over. My DC recommendation of this week!

House of X begins to set the stage for what the future of Mutantkind will look like. The team has figured out that a coalition of scientists from various groups have formed and begun construction of a Mother Mold: a self aware machine that can manufacture Master Molds which thus manufactures Sentinels. The build up so far has given a meaty history lesson on the new nation or Krakoa, the history of Moira X, and a glimpse into a future where Mutants are the dominant species. From here, this will be a series of events that can either build the foundation of a new age or once again collapse Mutantkind into dust.

The House of El has been fighting to prevent a full on intergalactic war between several of the galaxies most powerful groups. From here, Superman’s heroism is on full display and the issue sets up the big return of the Legion of Superheroes (even though this was all supposed to be after the conclusion of Doomsday Clock, which I’ll get to in separate article)! I really love Bendis’ run on this and Action Comics, he’s a great fit for the character and he’s doing great things for the lore. Hoping to see more from this title!

Steve Rogers is on the run and he’s going to have to prove himself innocent in this new world turned against him. Feeling like a spy thriller, this issue is great fun for Cap fans and those following him after the events of Secret Empire. It’s a sad world indeed that is able to fall for the plot laid out by the remnants of Hydra once again. But the ever hopeful Steve Rogers presses on to prove the world they are better than this. We’ll see where this all goes from here.

Azrael is here and he’s taking Gotham away from the supposed tyranny of the Waynes. The next book in this sequel brings the history of the Waynes and how they came to Gotham and “took” the land away from it’s rightful owners. As usual Sean Murphy works wonders with his words and art together providing a gritty vision as advertised. It’s worth a read of you’re looking to add to that Black Label collection you’re probably thinking about starting.

That’s about it this week but there’s always more out there to read so don’t forget to check out these titles at your local comic shop. Check in every week for a update on the most interesting titles from the Big Two.