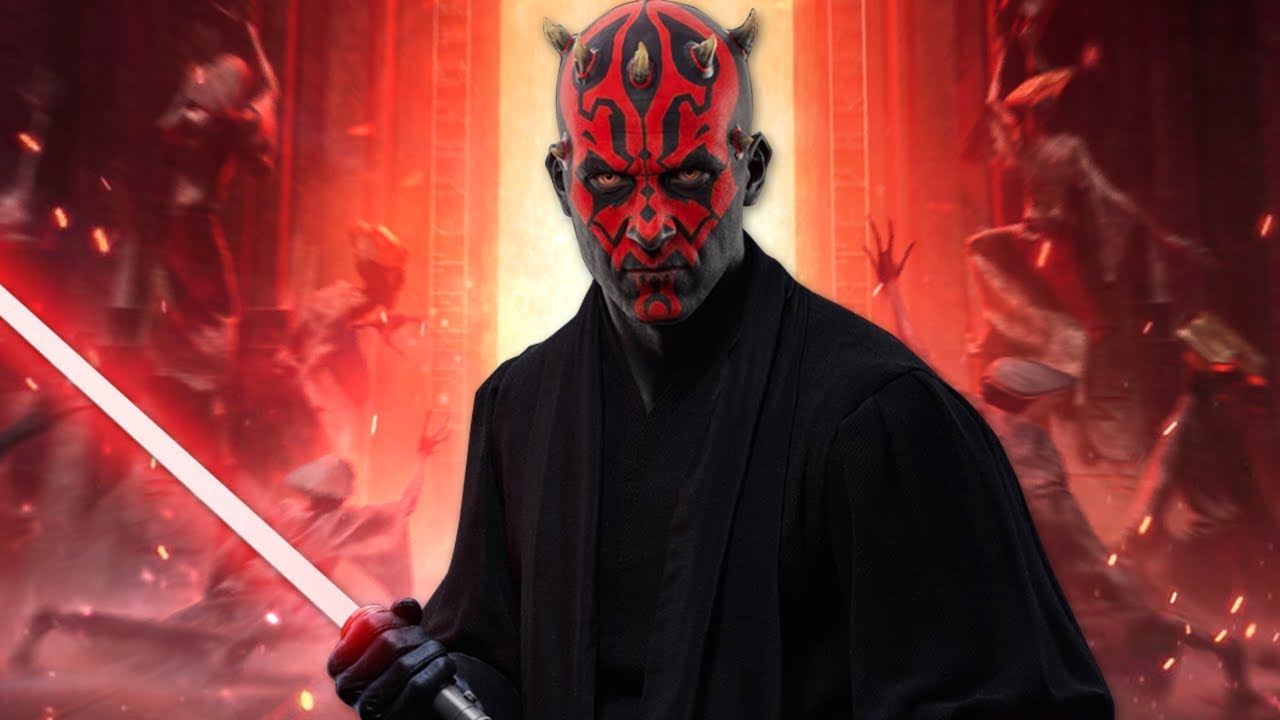 As one of the most recognizable villains in all of Star Wars, it should be no surprise that Darth Maul is among the most popular characters that gets praised by fans on a regular basis. He’s a dark, menacing, and ruthless antagonist with an unforgettable face and a unique light saber that sets him apart from his dark side contemporaries, making him a beloved icon in the Star Wars universe. But is it possible that maybe Dark Maul’s position in the Star Wars hall of fame is overblown and wrongly elevated above others without any real justification? In this article I plan to make the argument that Darth Maul is not only one of the most overrated characters in Star Wars, I also plan to prove that he’s that he’s also one of the most disappointing as well.

Back before he ever earned the title Darth, the Zabrak dark sider that Star Wars fans now know, and love was known as simply Maul. Born on Dathomir to Mother Talzin of the Force-wielding witches known as the Nightsisters, Maul and his brother, Savage Opress, were trained from an early age to be Nightbrother warriors. Mother Talzin, who was a close ally of Darth Sidious during his days as an apprentice to Darth Plagueis, taught the future Sith Lord many of her dark Force powers in hopes that he would take her as an apprentice when he eventually became a Sith Master. Unfortunately for her, when Sidious noted the great potential in her son, he chose Maul instead and fled with her son whom he trained in secret to become his first apprentice.

From there Maul was trained in the ways of the dark side of the force by Darth Sidious, all the way up until he achieved what I believe to be the single greatest accomplishment of his legacy by killing Jedi Master Qui Gon Jinn. But just like almost every other achievement in Maul’s life, this triumph was immediately cut short (pun intended) when Qui Gon’s apprentice Obi Wan Kenobi sliced him in half and sent him tumbling down reactor shaft to what was supposed to be his death. But as we all know, the tenacious son of Talzin would not be defeated so easily as he miraculously survived this duel and stayed alive by using his hatred of Kenobi for fuel until he was found by his brother Savage and brought back to Dathomir. Once he was back with his mother and healed of the injuries he sustained in battle, Maul immediately set off to join the Clone Wars with his brother Savage and together they had a good run chasing greatness.

As someone still fueled by the hatred and anger, Maul’s pursuit of revengeful ambition allowed him take control of the Black Sun Pirate organization while also forming an alliance with Pre Vizla and the Mandalorian terrorist group known as Death Watch. Using this newfound alliance, Maul and Vizla were able to build a coalition of crime syndicates that came to be known as the Shadow Collective, and together they conquered Mandalore. To no one’s surprise, this partnership didn’t last long though as Maul and Pre Vizla faced off against each other until only Maul stood victorious as the sole leader of Mandalore’s people. Once established in his new seat of power, Maul set up a confrontation with Obi-Wan and killed the love of his life, Duchess Satine, right in front of him. But here again, this is where we see Maul nearly achieve his goals until once more, he finds himself faced with utter failure.

As impressive as these feats were in the moment, they had no lasting effect as they drew the attention of Palpatine who swooped in and swiftly destroyed Maul’s hopes and dreams of revenge in the most disrespectful fashion possible. With little effort, Darth Sidious not only laid waste to Maul’s claim as a supposed Sith Lord rival, he also stripped him of his status as Mandalore’s leader and slayed his brother Savage with no remorse right in front of him. Adding insult to injury, once Maul was able to somehow escape Sidious and return to Mandalore, he again found himself faced with failure as he met defeat against Ashoka Tano in battle and almost died. Had it not been for Order 66 and Ashoka’s choice to save Rex instead of finishing the fight against Maul, the former Sith apprentice would have died right then and there. But he escaped instead.

From there, Maul was never able to achieve much of anything noteworthy in his last days. Sure, he managed to take over the Crimson Dawn criminal syndicate and make yet another run at trying to get revenge against Sidious and Obi Wan one more time, but again his best efforts weren’t enough. In fact, the only thing his best effort did was get for him was stranded on the planet of Malachor until his path eventually crossed with Ezra and the crew from Star Wars Rebels. This was a fortuitous event that eventually led him to discover the whereabouts of his lifelong nemesis Obi Wan Kenobi, who faced him down and defeated him to complete his final failure in an already extensive line of failures.

As a Star Wars fan who can admit they’re a little jaded due to Disney’s inept approach to the franchise’s story, I want to make it clear that I have nothing personal against Darth Maul. I think he’s a cool character who provided a great deal of entertainment to me as a consumer of Star Wars media and I appreciate his overall contribution to the universe of Star Wars. With that being said, I remain adamant that Maul is overrated beyond belief if you look at the totality of his legacy through a lens of unbiased analysis. Yes, he’s cool looking, and he does lots of visually appealing attacks when he engages in lightsaber combat, but he’s not worthy of being put on the pedestal that he’s on when it comes to dark side force users within the Star Wars universe.

To be frank, all you need to do is look at his track record within the Star Wars mythos and you’ll be able to see the truth for yourself. Yes, he was able to kill a Jedi master, but ultimately, he failed the mission Sidious sent him on as he was defeated by a Jedi padawan. Yes, he managed to defeat Pre Vizla and take over Mandalore. But right after achieving this he failed to create and sustain an empire of his own for any period of extended time and when it was all said it done, he got his own brother killed while also failing to ever take his revenge on the sworn enemies that ultimately gave him purpose as a character. Not only that, he also basically lost or ran from every duel he participated in with an opponent of equal or greater skill level, and he failed at turning Ezra to the dark side at right before he was defeated by a BLIND jedi. To me, if it wasn’t for the cool appearance, the double-bladed light saber and the awesome cybernetic legs, Darth Maul would be just another corny character who isn’t psychologically complex or thought provoking enough to be worthy of the praises he often receives from Star Wars fans. How could he be worthy of the praise when every single accomplishment he’s had was immediately diminished by his failure to capitalize on his successes?

This is the question you have to answer for yourself as a Star Wars fan, but to me, at best, I call Darth Maul a C+ character in the Star Wars Hall Of Fame.

At this point, you probably feel different than I do though, so please, share your thoughts so we can have a conversation in the comment section below!