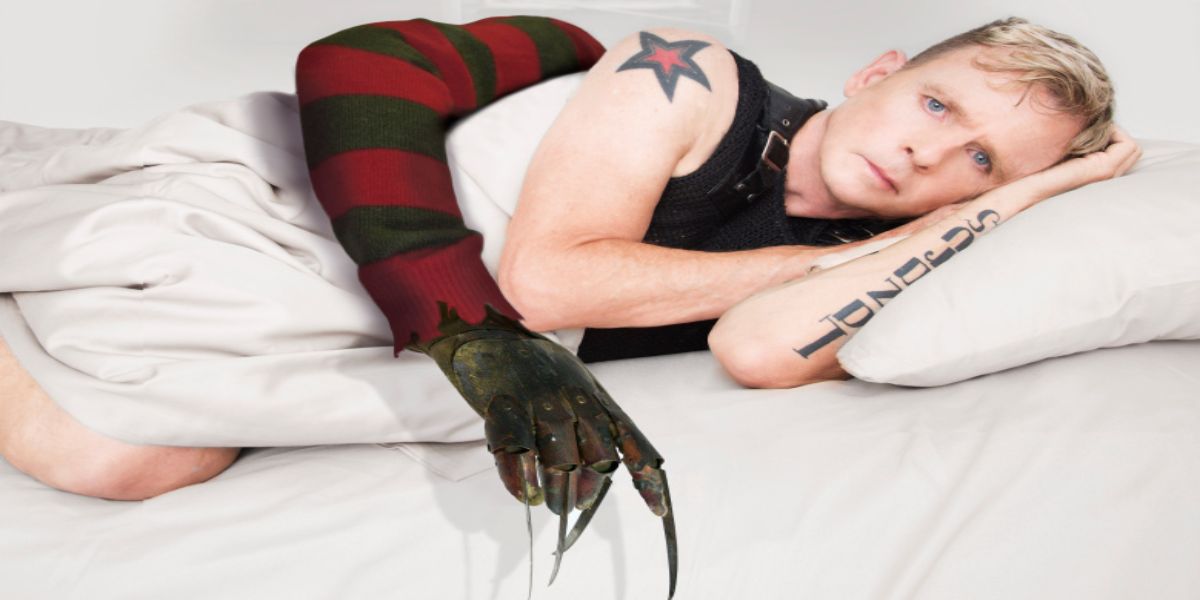 Pride Month is still one of the most important times of the year for the LGBTQ+ community. It’s a time to celebrate the struggles the community has overcome and to look forward on how to make continued progress. This struggle towards equality can’t proceed without an understanding of the past and sometimes the media can play into the larger conversation. In the 1980s, Slasher Horror cinema was at its peak and the king of these franchises was A Nightmare on Elm Street. It had an iconic villain in Freddy Krueger and spawned several sequels, but the first equal is a unique beast. Soon after its release It was quickly noted how overtly gay subtext was present throughout the film. This was so apparent that the closeted Gay star of the film, Mark Patton had his life uprooted because of this. The documentary Scream, Queen: My Nightmare on Elm Street explores this story, the subtext in the film, and Mark Patton’s life as a result of this 80s horror film, which has garnered a cult following. The documentary is a journey of pain, loss, and acceptance worthy of analysis especially during Pride month. Here is our review.

There has been a wealth of information about A Nightmare on Elm Street before. This includes behind the scenes clips, interviews, and the now well regarded 2010 documentary, Never Sleep Again. That documentary is an excellent overview of the series, but what it does miss out on a bit is telling the more personal side of everything. It taps into the Gay themes present in the second film, but it doesn’t go much further. There was an empty space that needed to be filled and it starts with the star of the film finally being public about everything involved. It has been a long time coming.

Scream, Queen: My Nightmare on Elm Street follows actor Mark Patton, who was an actor of stage and some small roles before landing his potential big break on A Nightmare on Elm Street 2: Freddy’s Revenge. That film continued the Elm Street franchise, but this film added an even deeper layer of Gay subtext to the film. At the time, Mark was a closeted Gay man. He knew who he loved, but he couldn’t be out because this film landed right around the time it was the height of the AIDS epidemic in the US. AIDS ravished through the Gay community during the time killing many people and because of this it further created an air of intolerance, homophobia, and bigotry that permeated into Hollywood. Mark had to stay in the closet for safety and when it was becoming too much to bear and his identity could be revealed he fled Hollywood and the life essentially having his career as an actor fall apart. The film excellently tells this story in ways which are empathetic and easy to follow, which makes for an incredibly moving experience.

This documentary takes its time to make sure that this story of pain and LGBTQ+ themes are presented as entertaining as it is informative. There is a lot of research put into every moment and each person interviewed has their own unique input that gives the story a well-rounded approach. The style of documentary isn’t unique, but this story is and that is at the heart of why it works as well as it does. It is absolutely worthy of discussion because of the beautiful way in which it puts forward telling such a heartbreaking story. It is also worth enjoying if you happen to be a fan of the Nightmare on Elm Street films and want to know more about one of the more interesting sequels in the series.

The structure of a documentary is essentially what really keeps it from being uninteresting. There is an art to the editing and interview collection that is needed to make a coherent documentary that presents the facts and the individual perspectives of all involved. It’s hard to make something that is interesting and it is even harder to make it entertaining at the same time. This film manages that balancing act with ease as it uses its technical prowess to succeed.

The film has collected a wide range of individuals to have interviews with, but the focus is mostly on Mark Patton. His perspective is one that has been elusive because of the difficulties and challenges he faced along the way. When you focus the narrative with one central person the documentary runs the risk of skewing in one singular direction without an overview of everything involved with the story being told. The challenge that the team behind the project find is using their connections to not only get talent who are willing to give multiple perspectives, but also finding an editing team willing to compile it in such a way that every interview is used to keep the story and structure of the entire project focused. This film is benefited from the production value of the project. It is a smaller budgeted production, but the talent involved kept as much archive footage and brought a sense of polish to it that a lesser production team wouldn’t have been able to. The editing is stellar in keeping things organized in a way that tells the story without being over indulgent. The cinematography and all of the technical aspects are more than up to par as well, which serve the greater purposes of giving more insight into the life of a Gay Man who had to experience such pain and oppression. It is smart in the execution and the technical side is done in a respectful manner.

The film was made thanks to the fans who generously donated to a Kickstarter campaign and helped to get it off the ground. It also gained enough traction for it to finally make its way to the streaming service, Shudder. This project was a labor of love that the whole creative team led by the direction of Roman Chimienti and Tyler Jensen excelled at. The structure is more typical of other documentaries of this sort, but solid enough that it finds ways to make it stand out among the rest regardless of the subject matter presented. This is crucial to creating something that is memorable and luckily this documentary has done so with ease. The structure and the production is solid, which facilitates another crucial aspect and that is the thematic elements presented.

It can be easy to dismiss a documentary as a project designed to simply relay facts, but that couldn’t be further from the truth. Documentaries like any other film have a story, they have scenes that present the story, and they have themes. The themes present in any work of art determine the value with which they can be analyzed and interpreted and the themes in this film have to deal strongly with Gender, Sexuality, and Acceptance. This is crucial to understanding the struggle with which many LGBTQ+ people have dealt with and still deal with.

Mark Patton’s story is one of pain that I don’t want to dive into here, but it associates directly with abuse and bigotry. Thematically this is at the center and while it may be interesting to see that A Nightmare on Elm Street 2 has an overtly Gay subtext, the point of this film isn’t to point those things out. It’s about how a person like Mark has experienced the same levels of abuse that millions of people have at the hands of a culture that is oppressive of those that are different. Mark is just one notable example that has been in the public eye. The film in turn tries to give him a voice when in the past that voice was stripped from him due to other people wanting to paint the story for him. This removal of his perspective is talked about in the documentary by himself and it in turn becomes a theme for how LGBTQ+ people are treated. The film even takes its time in exploring the culture of the 80s giving a vivid and honest look at the AIDS Epidemic compared with the ways in which homophobic language was thrown around so callously in films of the time. There is a very poignant moment that features a variety of popular 80s films casually throwing around slurs, which from a modern perspective is certainly eye-opening.

The themes presented throughout this film is one of tolerance. It wants you to have sympathy and it hopes that his story can shed a light to those that may not be nearly as familiar either with the struggle or with him in general. The film also covers the need for people to be presented in certain ways that may not be accurate. The act of putting on a costume to pretend to be someone else is truly harmful to people and the world’s obsession with a certain type of normal and a certain type of beauty is one that needs to be challenged. All of these themes that include pain, death, bigotry, and dishonesty play into the documentary and present a thoughtful and sympathetic portrayal of a man harmed because of something he had no control over.

Scream, Queen: My Nightmare on Elm Street is a layered and well thought out Documentary production that taps deep into the heart of LGBTQ+ identity and themes, while showing a love for the art of cinema and the power that one film can have over many people. It is a worthy experience that should be seen by those that want a better understanding of prejudice as well as those that just want to learn the behind the scenes nature of A Nightmare on Elm Street 2. It works as both and finds a way to keep that balance, while appeasing both LGBTQ+ viewers as well as horror fans. It is absolutely worth your time if you happen to be interested in a documentary like this and I highly recommend you see it especially during Pride Month.

So to all of our LGBTQ+ Family we here at Up Your Geek want to wish you all a very Happy Pride as we all struggle through this very difficult year. You are all loved.

Please Donate to The Trevor Project if you want to continue supporting LGBTQ+ causes and care.

‘THE BOYS’ RETURNS SEPTEMBER 4th TO AMAZON PRIME VIDEO FOR A F***ING DIABOLICAL SECOND SEASON DEBUT
Excuse Me Miss, Your Ignorance is Showing: Response to the TIME Article About Superheroes