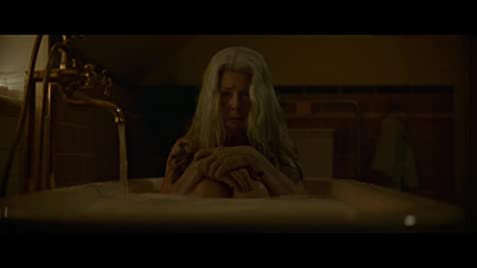 One of the bright spots of what has been an odd year in cinema has undoubtedly been Natalie Erika James’ debut Relic, which tells the story of a mother and daughter coming to the aid of their grandmother during a time in which dark forces and an evil aura begin to cast a shadow over the elder woman and the house she occupies. Despite it’s extremely low-budget, Relic does not lack any creativity with interesting camera tricks and suspenseful scenes that will keep you tense, but most importantly, embraces the emotional, and saddest elements of decay and family themes.

The inciting incident is a very quick sequence that is further explained with exposition in later scenes; Robyn Neva’s Edna is seen almost naked in the main floor of her house as the camera pans from water leaking from the second and the audience is given their first hint of a dark presence overtaking the older woman and cuts just as a shadowy figure emerges.

From this moment forward Director Natalie Erika James beautifully utilizes dark and mysterious imagery to convey a an unsettling tone that, thankfully, remains consistent until the final shot. The theme of the film is focused on the struggles of family coping, the coping in this case to Edna’s crippling metality that is not only shown to be a burden for Emily Mortimer’s Kay and Bella Heathcote’s Sam, but also in many ways a curse that could (and implies) will be carried by members of the family.

Unfortunately the biggest difficulty Relic suffers from is a lack of identity for the presence of evil we’re supposed to fear; the are no moments in the film where there are any rules are developed. While I had mentioned a few pacing and editing choice issues, the issue of the presence bled close to spoiler territory and while it is utilized minimally, it is the vital part of the film that drives the madness of Edna. The one shot in particular is of a shadowy figure following the women throughout the house, creating far more questions than answers as opposed to the distorted shadow movement during the “under the bed” sequence.

Without question the most incredible moments of Relic occur during the final shots of the film, when the hereditary effect of whatever demon has infected Edna and her family, including Kay, begins to cause her skin to peel away and leave as nothing more than a shell of what she once was. This scene is extraordinarily heartbreaking once Edna looks up to her daughter Kay, essentially skeletal, and smiles. It was both a relief and a shock to see such effective filmmaking brought to such a grotesque animatronic. It is truly beautiful.

What makes the “peeling” essential in the closing shots, is that it is consistently hinted at by Edna herself as she peels the sculpts of wax that are displayed throughout the house. It is usually during Edna’s most calm and controlled scenes, giving viewers the realization of James’ intent with having her character subliminally signal to Kay and Sam that she is being shed from herself, that she is being peeled away.

Relic’s final shot is that of the stained glass window that had been a part of their extended family’s previous home. The presence, or darkness, is a part of the family, it is an hereditary gene that is noticeably carried by Kay, and presumably, Sam. This is a film about the struggles and continued family history of sickness, how it affects and can tear relations, but more importantly, demonstrates the belief that even in the most dire and darkest of family conflicts, there has to be a sense of loving and understand. Which is incredibly bold for a Directorial debut, and effectively at that.