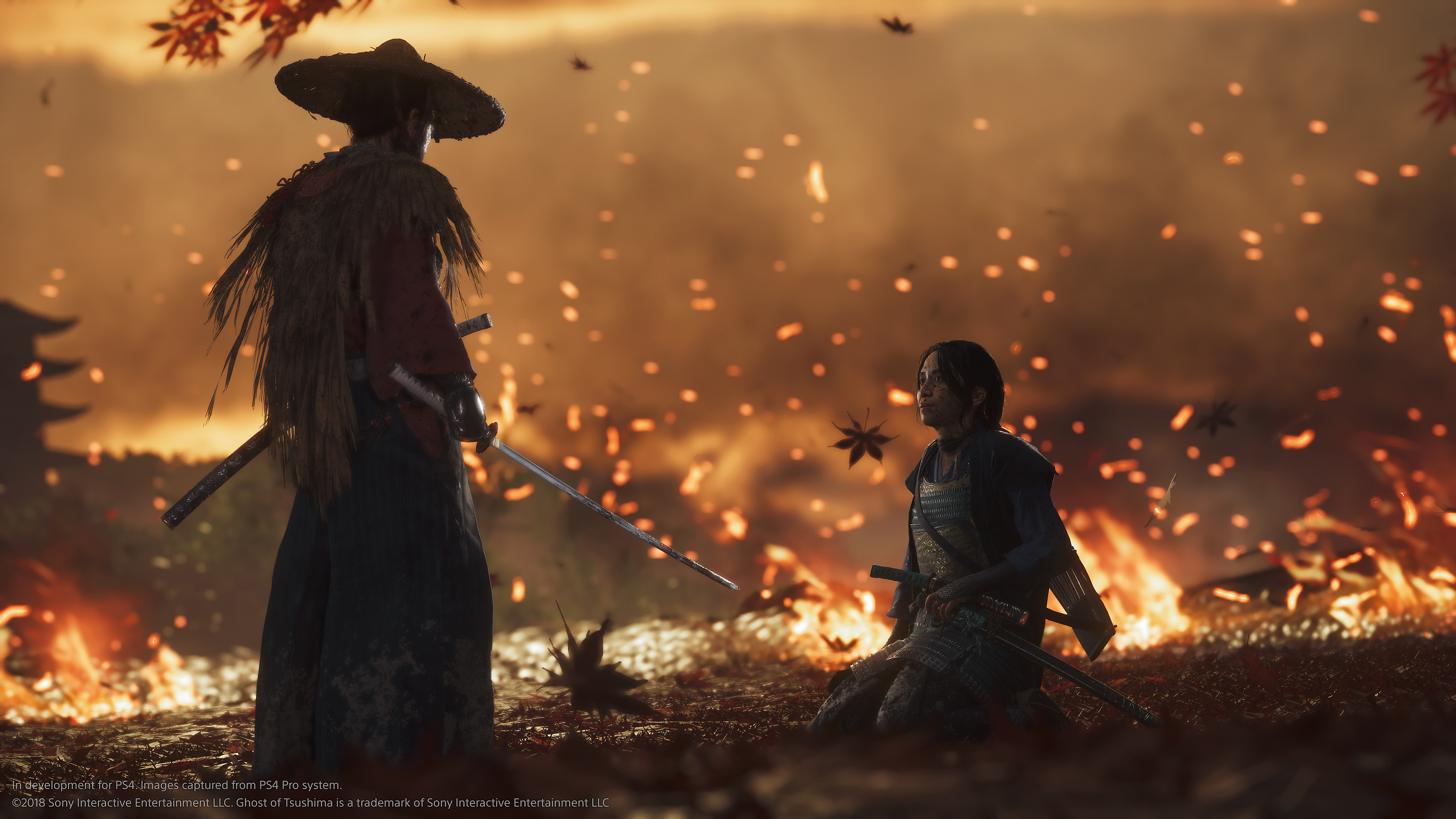 Gamers, particularily those with a taste for periodic pieces, have been chomping at the bit for years now for an open-world adventure game set in futal Japan in the akin style of Ubisoft’s Assassins Creed series, and while there have been many glorified attempts to capture this genre, none have accomplished what Sucker Punch Studios has accomplished in their newest release, Ghost Of Tsushima. With the inclusion of co-op multiplayer and even newer game modes being added to the game on October 16th, Up Your Geek is taking a look at what many critics have acclaimed to quite easily be the “Game Of The Year”.

While the story, characters, and moments in Ghost Of Tsushima are works of fiction, the events of the Mongol invasion on the Islands of Tsushima during the mid-Thirtheenth Century, and despite the fantastical and mythical elements of the story, help lend to the groundedness and realism of the world Sucker Punch Studios has created.

Ghost Of Tsushima follows the story of Jin Sakai, the last, to his knowledge, surviving samurai of the Mongol invasion on the beaches of Komoda in 1274. While not the most feared or skilled samurai, Jin possess a vast knowledge of understanding and faith, allowing for video game character development to fluorish without feeling systematic. Systematic in the sense that the players progression is one of the most natural feeling I’ve ever seen in a video game. Basing itself off of the classic “Nothing to Everything” inventory and progression structure, whilst also taking mechanics from games such as The Witcher and Horizon Zero Down (and improving on them), Ghost Of Tsushima’s greatest strength is it’s fluent integration of said systems and how they affect, or are affected by the story.

Arguably the most impressive feat is the enhancement of techniques and abilities through XP gain by completing objectives across the islands. There are an amazing (though overwhelming at time) amount of abilities that you can learn and apply to Jin. From “Stances” to “Weapons”, it only takes a short amount of time to turn Jin from a serviceable armed force, into a powerful Shogun that is feared throughout the land. My personal default would be to use Water or Wind stances as the amount of shield and spearmen you face in the game is rather abundant during the first two-thirds of the game. Ghost weapons and tactics brings out the true assassin in Jin as you upgrade and equip kunai blades, smoke bombs, and even distraction methods with wind chimes, and evolving stealthy techniques such as “Standoff Streak” and “Shoji Assassination” make for an impressively complex action and combat system. The grappling hook, variety of bows and arrows, and wide array of allies effectively help you on your way to slaying all of the Mongol forces.

When I initially began my playthrough I had assumed that once I had completed the island I could safely begin to make a organize a proper review; however what I did not notice upon the first few gameplay was that there are an entire two more islands left for me to explore and liberate, because of this I had to focus way more hours than what was expected, and Ghost Of Tsushima is all the better for it.

The first island of Tsushima is utilized as a way of introducing the major mechanics, but most importantly, the story beats. Jin’s main side stories throughout Act 1 revolve around two allies: Lady Masako and Sensei Ishikawa. Masako’s family, including her grandchildren, had fallen to the hands of Mongol invaders, whilst Ishikawa, a famed Kyudo archer, had accidently forced his best student to ally with enemy. While there are other allies you encounter and engage as the game progresses such as Yuna, Taka and Kenji, Masako and Ishikawa carry such emotional weight that really drives home the scope and devastation of the invasion. Lady Masako, while understandably on a hunt for revenge, consistently pushes the player to question their ethics and moral compasses, whereas Sensei Ishikawa’s naitivity causes frustration and often tension between himself and Jin.

Ghost Of Tsushima also features an abundance of side missions and locations that feature upgrades, whether it’d be rescuing a village or farming town from bandits and Mongol, to Fox Dens and Shrines which are a nice change of pace and can be a calming task for the player. What is all the more impressive is how important these side quests can be for the overall experience. I specifically recall one mission in which you are tasked with rescuing a man’s family after he escaped a home invasion, once it has become clear that the family did not survive you must confront the man and tell him the truth. It is a truly horrific moment for such a small touch and it forces the player to engage further into the emotional impact of the story. There is no particular honor system dedicated to Ghost Of Tsushima, rather it is up to the player to either “spare” or “end suffering” of enemy NPC’s. Again this doesn’t force any honor system, but is brought up during one of the early assassin missions by Jin that he finds killing from behind or mercillous murder to be cowardous as opposed to defensive, so it is really a question of whether you as the player want to keep that consistency as part of your playthrough.

There are very issues that I had with the game, and those I did could be easily fixed with patches later; the transitions during certain cut-scenes and standoffs can be jarring at times, and the enemy NPC’s can be unintentionally hilarious as they are some of the blindest and deafest ones I’ve seen in memory, however, this did show slight improvement upon a higher difficulty selection. The animations in many of the NPC’s can also be seen as repetitive or robotic, but one I managed to see past quick eaily given the fluency of the combat system.

Ghost Of Tsushima is an excellent display in mechanics and storytelling. Every frame and every character beat in this 70+ hour journey is gorgeous and captivating. From the dynamic characters, heartbreaking revelations, and well-paced narrative, it is difficult to put this game down for long periods of time before completion. With only a few technical issues to glare at, it is easy to see why Sucker Punch may have put one of the best endings to a generation in a long time. Ghost Of Tsushima is brilliant demonstration to the legacy of the PlayStation 4, and it is an ending that will be sought for many developers and their systems.

Todd McFarlane Pays Tribute To Chadwick Boseman In Upcoming ‘Spawn’ Cover
Sony Should Take A Cue From Warner Bros. And Bring Back Andrew Garfield As Spider-Man