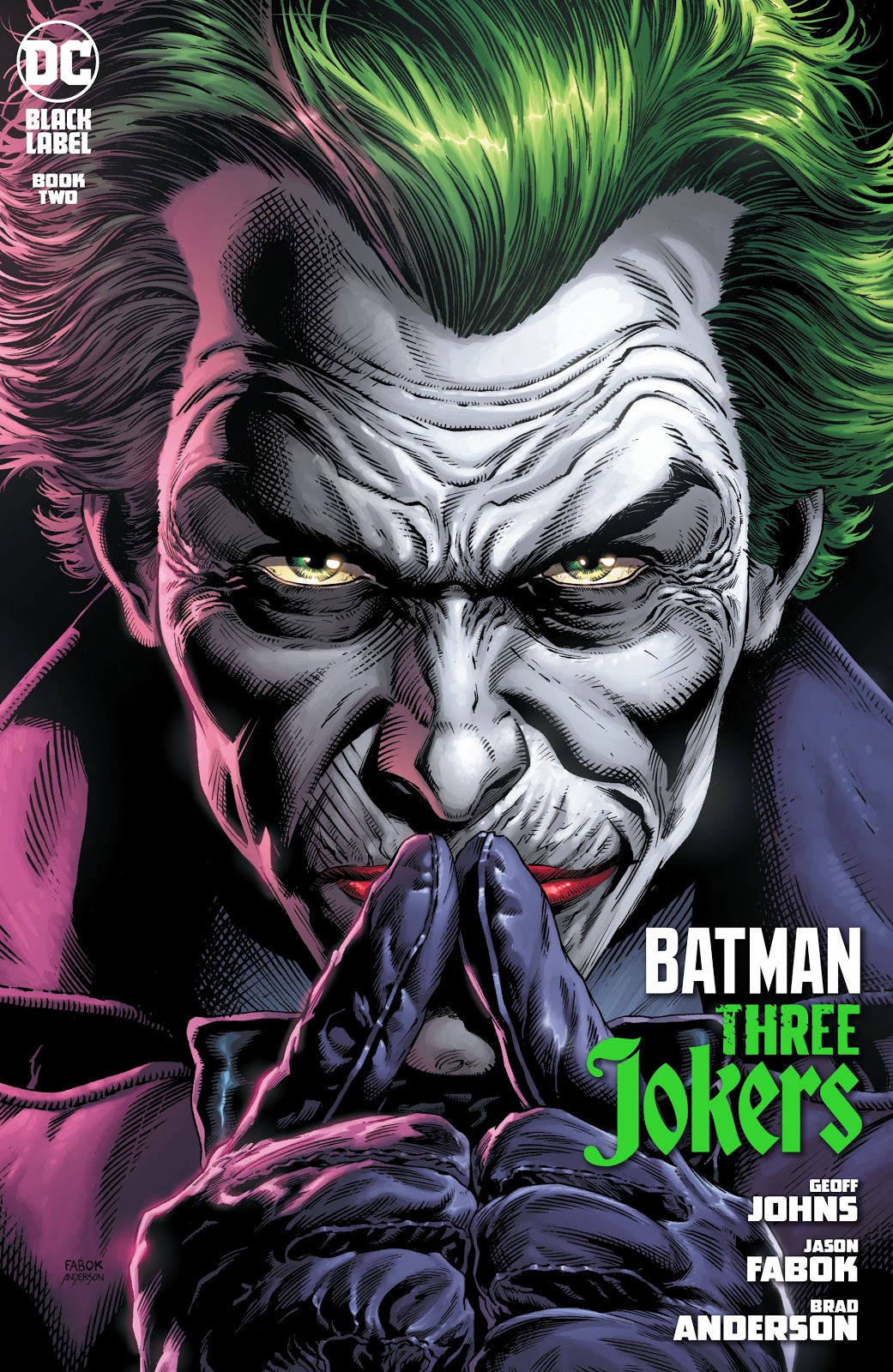 As with many things by Geoff Johns, Three Jokers is a slow, methodical tale of these devious clown villains and what their evil scheme truly aims to be. What they want is still unclear, sort of, but the issue does put the spotlight on certain aspects of Jokers damaging effect on the Bat-family. Let’s take a look into what happened in this months Three Jokers.

Issue starts off with the Comedian Joker driving in a suburban area and stopping at a house. He walks in and says hello to his wife, a woman who looks exactly the same as his supposed wife in the Killing Joke story. It’s dinner time and Joker demands his son come down to eat, but he’s too scared to come down and the mother has to convince him to come otherwise the implication would be that Joker gets furious and hurt them.

The terrified family eat their Octopus and the Joker basks in the moment, only for readers to find out he’s making it all up in his head. The Comedian Joker enjoys his daydream when the Criminal Joker snaps him out of it and tells him that it was Comedian’s idea to reveal the truth of their existence to Batman. With the Clown Joker dead, they must move their plans forward and get moving.

Elsewhere, the corpse of the Clown Joker is laying dead where Red Hood left him and a fly buzzes on it. Batgirl had left the body to meet up with Batman, who’s investigating the crime scene he ran off to. A ex-judge is dead and he was connected to the revolving door that is Arkham Asylum, having made deals to send criminals there knowing full well they could escape. It would appear he was killed by his own dogs, having been gassed by Joker, and they proceeded to devour his face. Batman looks at the body and collects evidence around the room, wondering what connection he could have to Joker when Batgirl walks in.

She tells Batman about Red Hood and the Clown Joker and how they must stop him. Batman doesn’t react as strongly as Batgirl had hoped, asking him why he’s being so calm about this..Batman tells her he’s always felt guilty, and forever will, about not being there for Jason when he was resurrected because he didn’t know he had. He had hoped Jason would be like Barbara, who took her tragedy and worked hard to overcome her disability and become a better person. Together, they follow a lead on a clue found at the dead judges home, fingerprints belonging to Joe Chill, killer of Bruce’s parents.

Red Hood is currently beating Joker goons into telling him where the other two are. Scared to tell him in fear of the Jokers hurting them worse, Jason instead sees through his helmet scanners that the men have chlorine over their bodies, a type used in water filtration. Red Hood knows where to go now, but not before hurting the men more. Meanwhile, Batman and Batgirl visit Blackgate Penitentiary to inquire about Joe Chill and how his prints could be at a murder scene. After taking a moment to compose himself, Bruce tries to speak to Joe only to find his cell empty and him in the hospital ward of the prison.

At that moment, Batman gets an alert that the Batcomputer was accessed by Red Hood’s helmet and they know where he is. Meanwhile, Red Hood is entering a condemned Athletic facility and in there, he finds a pool filled with chemicals and bodies. Determining the chemicals to be somewhat acidic, he’s horrified by one of the bodies jumping out the water and asking for help, with a smile on their face and a Joker like face. He kicks it back into the water and is then knocked unconscious by one of the Jokers.

He awakens to find himself stripped naked and the Jokers standing above him, and Jason tells them he’s going to kill the rest of them once he breaks out. Criminal Joker, however, breaks out into painful laughter that makes Jason ask what’s wrong with him. He replies that for him, laughing hurts a lot. He explains to Jason that the best of things come in threes, like when Jason was reborn when he became Robin and was reborn a second time when he came back to life and how he must be reborn again.

Jason asks him if that’s why there’s three Jokers and Criminal tells him that he was the first, and he ran Gotham before Batman. He then asks him why Jason would take up the alter ego of the Joker, “The Red Hood”. Jason says he wanted to make it something bigger than Joker and make it his own.

But the two Jokers have another plan for Jason, and that involves Jason’s old pal: Crowbar. The Jokers beat Jason in a attempt to break him and set him down a path on to becoming another Joker. With a painted smile on his helmet, Jason can’t do anything but take the beating. Batman and Batgirl arrive at the scene and discover all the bodies in the pool have risen and they begin to swarm the two. As they’re being overwhelmed, Batman summons the Batmobile to crash thru the wall and take out the proto-Jokers. They then find Jason in a room, beaten badly and suffering from PTSD as he lashes out at Batman when asked if he’s okay. Jason explains the Jokers are trying to create a better Joker to keep up with Batman.

Jason is taken to Batgirls apartment, where he sees the old calendars and books that Barbara used to overcome her anger when she was disabled. Jason sees that she worked hard and overcame her disability, and it shows that Jason had taken the wrong approach to when he came back to life. Barbara comes in and finds Jason has showered, and they talk about why Jason feels like he was abandoned by the Bat-family, but after a tender moment caused by a kiss, they agree that was a mistake and that in the end, they’ll be there for each other. Batman is in the Batcave analyzing the evidence he’s procured during his entire investigation into this mystery of the Three Jokers when he gives his globe a glance, in particular, Alaska. Elsewhere, we see the Jokers have kidnapped Joe Chill and are videotaping his confession as to why he really killed the Waynes, hinting at a darker motive to it all.

This issue was an interesting one, given that the Joker isn’t really in it as much as people would’ve thought. It seems to be more of a Red Hood story featuring Batman, Batgirl and Joker as side characters. Overall, this story is sort of dragging its feet with answering the questions of why and how are there are three Jokers, or at this point two. Geoff Johns will have to pull of a miracle to have this story wrap up in a satisfyingly way, but it helps that the artwork is absolutely phenomenal. Jason Fabok and Brad Anderson are seriously, one of the best artists/colorists in the industry, rivaled only by Gary Frank/Brad Anderson which only speaks t Anderson’s coloring skills. I’ll rate this issue 7/10 and hope the final issue finishes off the final Rebirth mystery in a way fans can talk about for years to come.

Sony Should Take A Cue From Warner Bros. And Bring Back Andrew Garfield As Spider-Man
Batman:Death in the Family Review (Spoilers)