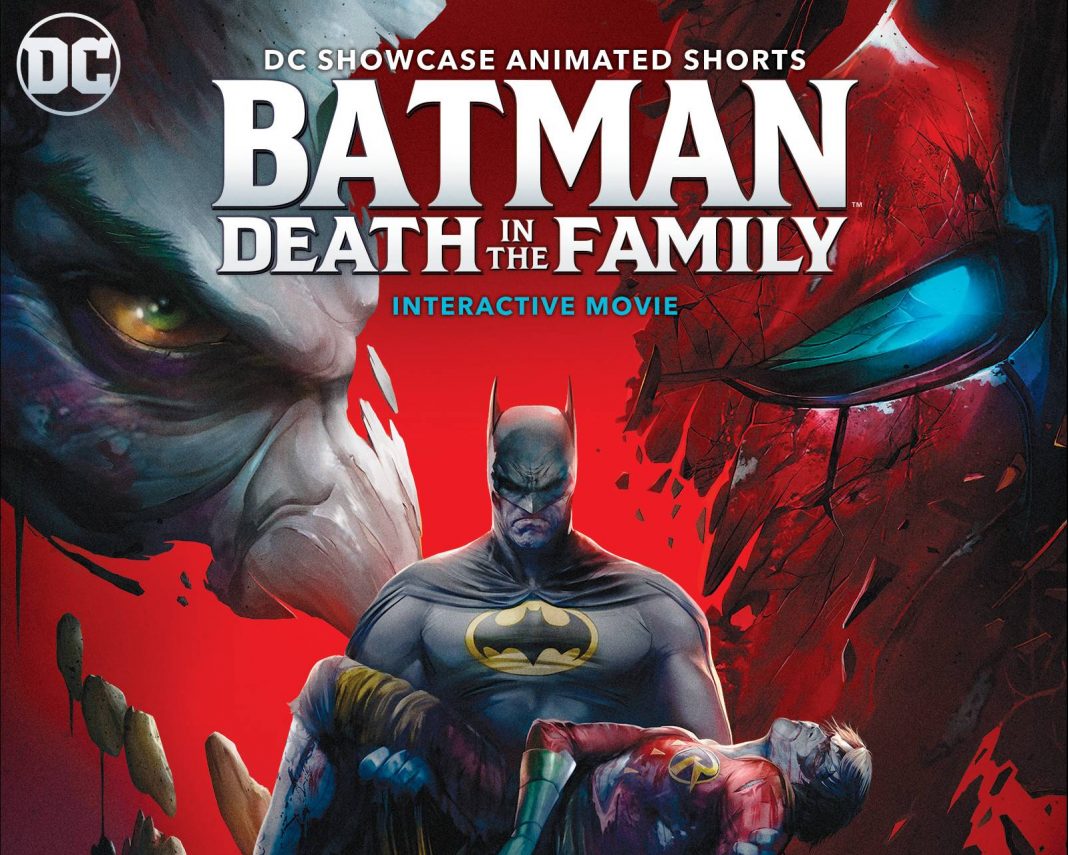 Many, many years ago there was a contest held by DC Comics to see what would be the fate of then current Robin, Jason Todd. At the time, many people weren’t fond of Jason and in the end, opted to have him killed off by the Joker in brutal fashion. Since then, the story became a classic and many years later Jason returned as the Red Hood, becoming a much darker and brutal vigilante.

Now with the release of Death in the Family, we are able to see what could’ve been in a similar fashion. For those who bought the physical copy, viewers are given the actual choice of what path to take. For digital viewers, the movie is broken up into short episodes that showcase each soth, of which there are three. Along with those are a few DC animated shorts centered around Sgt Rock, Phantom Stranger and Adam Strange. But let’s focus on the meat of the movie and take a look at what each choice showed off and how they differ. The animated feature begins with a recap of Under the Red Hood told by Bruce to Clark Kent, who is glad to see Bruce getting this trauma off his chest and dealing with it in a healthy manner. This gives viewers a recap of how the real set of events played out before seeing the alternate paths.

This version plays out if Jason had survived the explosion in Bosnia, albeit with some severe burns and dozens of broken bones. Jason is taken back to Gotham where he goes through numerous surgeries and skin grafts. Despite being surrounded by people who love him, Jason can’t help but feel that he’s being pitied. He doesn’t want to be the sad, helpless victim that people could use as a cautionary tale and so Jason runs away and dons the outfit of Hush, wearing a new robin suit underneath his jacket. He starts his war on crime same as in Under the Red Hood but this time expanding his murder spree against other villains of Gotham and even within the DCU such as Cheetah. Events play out very similar to Under the Red Hood except for a significant change.

With the citizens supporting Jason’s action, he’s approached by Talia Al Ghul and is told about the existence of Damian Wayne. She wants Jason to raise Damian as a brother and to bring honor to the Wayne and Al Ghul families. Bruce isn’t aware of Damian’s existence because she told Bruce she lost their child during the pregnancy, believing Bruce to be distracted by the state of Gotham. Unbeknownst to Talia however, Jason promises himself to raise Damian to be his weapon against the Al Ghul and Wayne families.

It gets crazier with this choice, as this version let’s Jason live but at the cost of Batman dying in his stead. Various heroes visit Jason afterwards, hoping to avoid him feeling any form of survivors guilt. But Jason focuses on the task at hand, wanting to continue Batman’s work. He promised Bruce he wouldn’t kill Joker for what he has done and after some time, Jason begins to accept his new role in life as support in the Batcave. That is until one fateful day occurs.

Going to a diner for some food, Jason bumps into a man who turns out to be Joker in facepaint, having given up being Joker once he accidentally killed Batman. He recounts the joke he told Batman the night of the Killing Joke and Jason immediately realizes who the man is, and once he lets Joker know who he is and that he also survived, he sticks a knife in Jokers eye killing him.

Jason now knows what need to be done, and becomes the Red Robin as he years across Gotham killing any and all criminals. One night, fighting Two-Face and almost dying as well as nearly killing Two-Face, Jason meets a young Tim Drake who inspires him to take up the old rules of Batman and forgo any more killing. From then on, they team up as the duo of Red Hood and Batkid.

This choice plays out almost identical to Robin’s Revenge except for a diversion at one point. Instead of allowing various heroes to talk to him and fill him with the memories of Batman, this time around Jason isolates himself from everyone. He grows darker and becomes enraged with the the fact that the Joker is alive while his former mentor died saving him. So Jason comes up with the idea to don the Jokers old identity as the Red Hood and take down the Joker the way Batman would’ve. With voices in his head telling him to kill, Jason fights those urges and fights the criminal underworld the way Batman did. However, Jason also decides to incorporate some of Jokers tactics into making him think someone is trying to replace him, thus giving Joker more incentive to be lured out.

The night of the bridge hostage incident shown in Under the Red Hood is where this episode diverges the heaviest. See, after Jason and Joker battle, its revealed to Jason that he’d actually been killing all the criminals in extremely violent and bloody fashion. The voices in his head were actually telling him what he was doing instead of what he thought he was doing. Horrified that he’s become more like Joker than Batman, Jason tries to reconcile with the Batfamily but finds himself vilified by his closest friends. Accepting his outcast status, Jason glooms over the city on top of Wayne Enterprises when he’s approached by Talia Al Ghul. Unlike the first episode where she brought along baby Damian, this time she’s brought along a resurrected Batman, who can only speak the words “Zor En Arr”, a reference to Grant Morrison’s Batman and Bruce’s subconscious alter ego, Batman of Zurr En Arh. Talia wants to recruit Jason into the League of Shadows but Jason refuses leading into a altercation between the three. After getting the upper hand, somewhat literally, Jason defeats Talia and is rescued by Dick Grayson.

Taken back into the family, Jason vows to help the family restore Bruce’s mental state as he’s locked up in the Batcave. The reasoning behind Bruce’s repetitive speech of Zor En Arr is because his memory is on a loop of the night his parents died. He recounts the line where his father mentions that a vigilante like Zorro would end up in Arkham if he were real. Zorro…in…Arkham…Zor..In..Ark…..Zor En Arr. Bruce is stuck repeating that for as long as he remains in that zombie like state as Jason tries to find a way to save his mentor.

All three episodes were spectacular and well made, as well as incredibly violent and bloody. It goes without saying this may mislead some people who believe its an adaptation of the Death in the Family storyline but its an adaptation of the format of how that storyline came to be, with fans making the choice. It would’ve been interesting to have seen these alternate choices be made into comic form but history has been set, this animated feature does a great job of showing what could’ve been in the case of Jason Todd’s life. I highly recommend this since the shorts up the value of this as a whole, making this a great gift to buy for a Batfan.