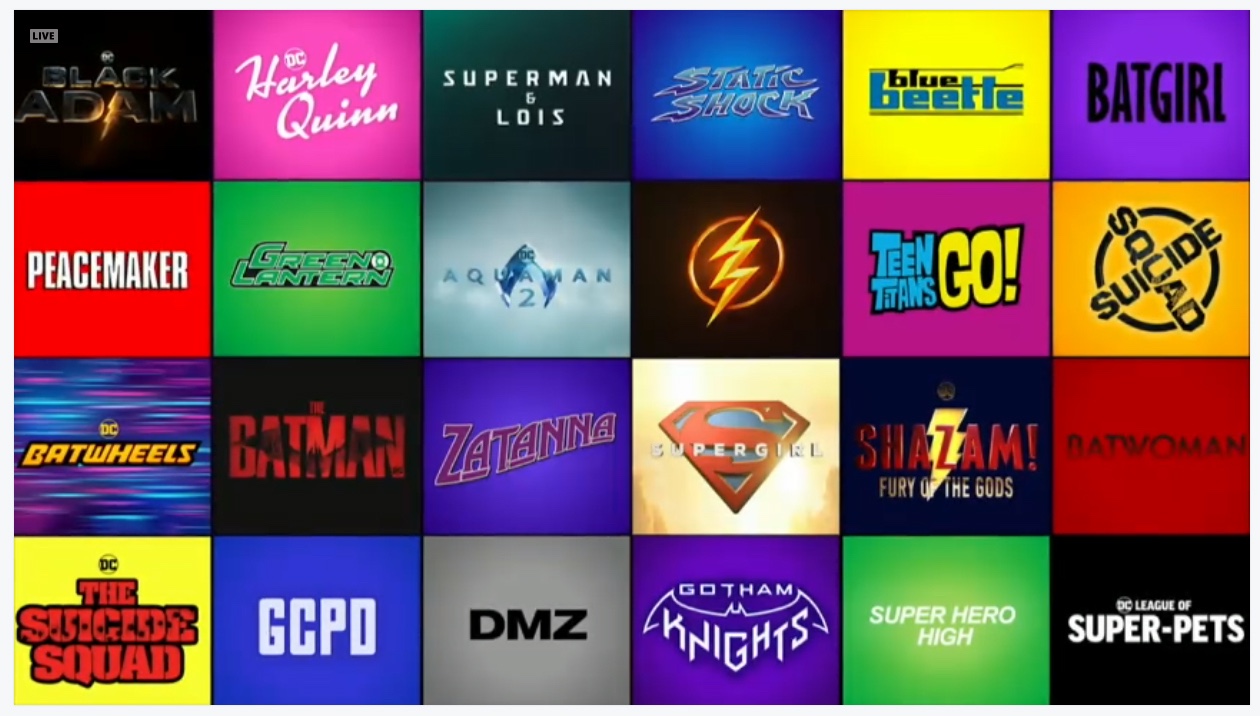 DC fans got a glimpse of all the DC television, movies, and video games coming Soon and there is no shortage of DC Comics adaptations hitting your favorite mediums in the near future. During the AT&T Analyst & Investor Day 2021 call, WarnerMedia revealed what seems to be everything the studio is currently working on — with some content currently airing; some we already knew were coming, and a few surprises, there’s a lot to be excited for.

The announcements include the James Gunn directed “The Suicide Squad” movie and its HBO Max spin-off “Peacemaker” along with the DMZ TV series; Aquaman 2, and Gotham Knights video game. Fan may be surprised to know that the once announced “Batgirl” solo film also appeared on the list as well as a “Zatana” series announcement for HBO Max. An image was revealed during the call, showcasing everything coming in the future.

“We will then have more than two dozen new movies, series, video games, and documentaries from the world of DC, including the ones that you see here,” explained WarnerMedia CEO Jason Kilar during the call. “The DC Multiverse, and this canon of unforgettable characters is a very big deal. We intend to dive deeply into it. And our other beloved worlds, and characters beyond the series and motion pictures you have heard about today, we have a carefully crafted arc, filled with settings and characters that are beloved by fans, and which we believe are ripe for exploring and reimagining these franchises, these magnetic characters and settings have broad and deep fan appeal, and we have just begun to scratch the surface of the stories to be told.”

We don’t know much about the new content coming in the future, as specific details were not revealed, but as fans may know, many of the titles were previously announced by WarnerMedia over during the past few years.

The next big thing for WarnerMedia is Zack Snyder’s Justice League, premiering March 18th on HBO Max. Next up from DC will be James Gunn’s The Suicide Squad is the next big DC movie to release. It will arrive in theaters and on HBO Max on the same day on August 6.

Are you excited for the news dropped at today’s AT&T investor presentation regarding DC content coming soon? Let us know your thoughts in the comments!