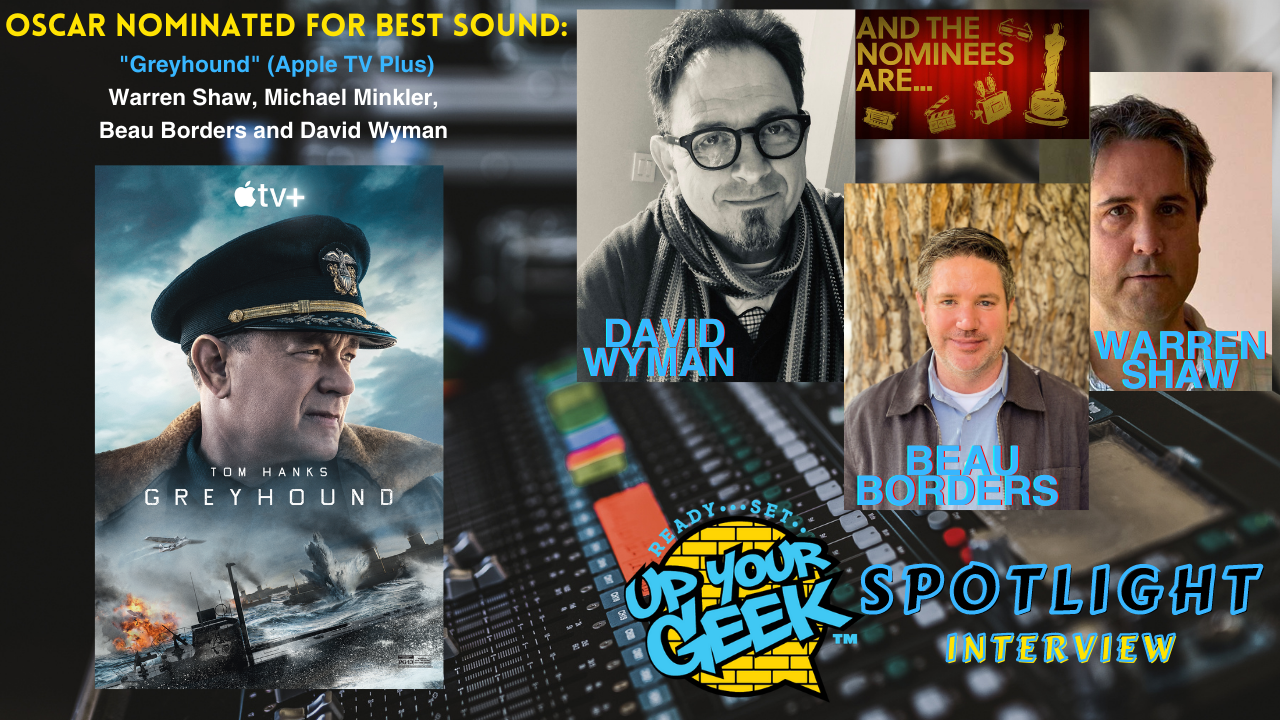 Oscar season is always exciting for the film industry and fans alike. The buzz around who will receive the prestigious honor of earing a nomination for their hard work can be just as exciting as the nominations themselves and there was not exception when it came to the excitement and passion the sound design team for Apple Studios ‘Greyhound’ starring Tom Hanks.

As we all know, this had been a tumultuous year for Hollywood (the world in general) as they have had to make major changes to the way they operate since the dawn of the corona virus pandemic more than one year ago. The adjustment came with many losses and sacrifices in the film industry that saw history be made once award season hit. Film deadlines changed, with some being cancelled altogether. Eligibility periods for films were also extended to allow for some films to be completed so the filmmakers weren’t penalized for missing deadlines. The saying, “The show must go on” rings true, as Hollywood pushed through a tough year to provide fans with entertainment and the much needed escape from a world falling apart. Enter awards seasons, albeit a very different looking one, and the stellar films that made the grade and gave the world something to look forward to in watching their favorite films, actors, and creators get recognized.

Apple studios ‘Greyhound‘ is one of those films. Nominated this year in the Best Sound category, ‘Greyhound’ star Tom Hanks as a longtime Navy veteran who, as a first-time captain, is tasked with protecting a convoy of 37 ships carrying thousands of soldiers and much-needed supplies across the treacherous waters of the Atlantic during World War II. For five days with no air cover, the captain and his small force of three escort ships must make their way through an area of the ocean known as “the Black Pit,” battling Nazi U-boats while protecting their invaluable ships and soldiers. “Greyhound” is inspired by events during the Battle of the Atlantic, which took place in the earliest months of America’s alliance with Great Britain and the Allied Forces. Stephen Graham, Rob Morgan and Elisabeth Shue star alongside Hanks. “Greyhound” was written by Tom Hanks, directed by Aaron Schneider and produced by Gary Goetzman.

The Oscar nomination for ‘Greyhound‘ follows recognition from BAFTA, where the film is nominated for Special Visual Effects and Sound; the Visual Effects Society and Motion Picture Sound Editors, where it is nominated in two awards categories each; and the Cinema Audio Society, which nominated it for Outstanding Achievement in Sound Mixing. The film has also received nominations from the People’s Choice Awards, Critics Choice Super Awards, Critics Choice Awards, and multiple critics groups.

The sound team behind Greyhound, include Warren Shaw, Michael Minkler, Beau Borders and David Wyman — who were all honored and excited about their nomination. “We would like to thank the Academy for this huge recognition. It is an honor to be nominated and we are grateful to our friends at Playtone, Gary Goetzman, Tom Hanks, and Apple for their incredible support. We are truly humbled” the ‘Greyhound’ sound team nominees said in a joint statement. At a virtual sound presentation, we were able to learn more about the great sound achievements in ‘Greyhound’ from the amazing sound team who even garnered praised last year from film star Tom Hanks. During the discussion the team recalls the remarkable action set pieces where sound is highlighted, including the use of the props from the 1940s that didn’t work. David Wyman discusses how he needed to modify all the equipment and get it to work so that the sound and communication was as authentic and flowed as seamlessly as war time for that time period. The team also discussed the challenges and fun of recreating sounds they’ve never heard or had little experience with, such as torpedoes firing and traveling underwater.

Check out the full discussion below: