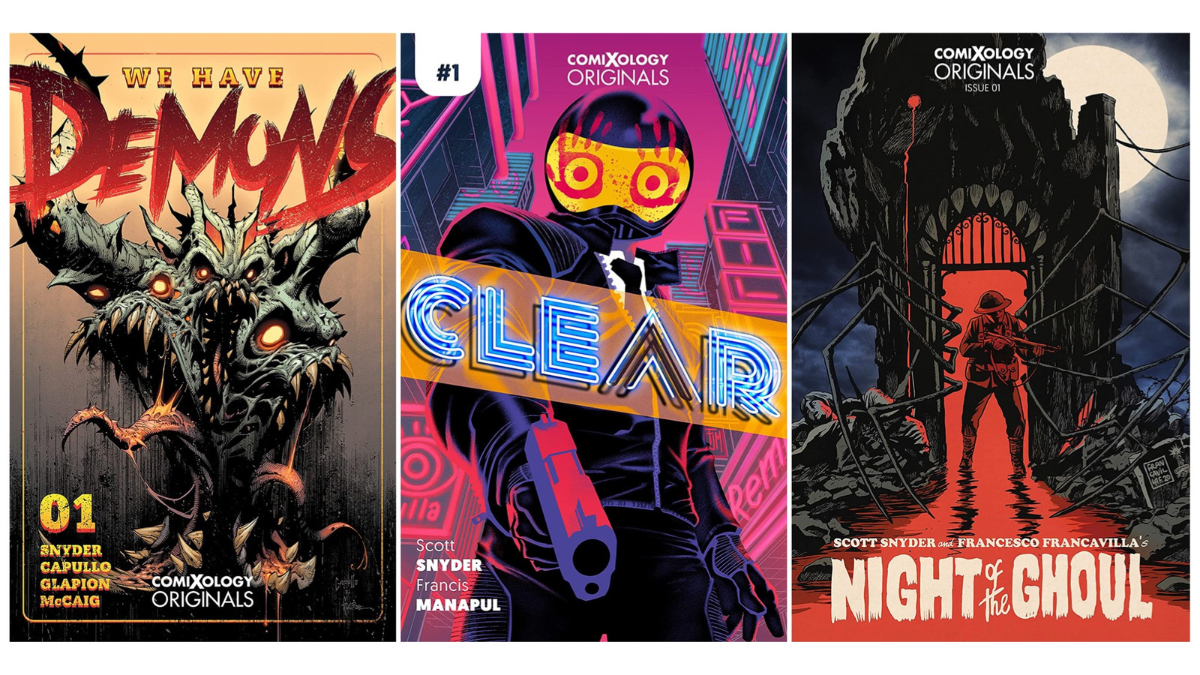 After a long hiatus for in person attendance due to the Covid-19 pandemic, New York Comic Con (NYCC) is back live in 2021 and fans will once again be able to roam the floors of the Javits Center. Something many have long waited for! Up Your Geek will be in attendance at this years NYCC and along with the return of the convention itself are of course the fundamentals, creators, entertainers, and comics!

Speaking to comics, the comiXology Originals line of exclusive digital content kicks off October with the debut of the first three creator-owned titles penned by #1 New York Times bestselling writer Scott Snyder and co-created by some of the top artists in the industry. First comes We Have Demons #1 by Snyder and Greg Capullo on October 5th, then on October 12th comes Clear #1 by Snyder and Francis Manapul, and on October 19th comes Night of the Ghoul #1 by Snyder and Francesco Francavilla. Closing out the month on October 26th the wickedly curious can get a glimpse at the next five upcoming titles in a Halloween Sampler.

“October has been deemed “Scottober” at comiXology Originals,” says Chip Mosher, comiXology’s Head of Content. “With the arrival of We Have Demons featuring widescreen action and the kinds of jaw dropping storytelling twists that have made Snyder and Capullo the bestselling creator duo of the last 25 years, followed by Clear Snyder’s first noir thriller and Manapul’s first ever creator-owned book, which is a dazzling, sci-fi thrill ride into a strange dystopian future, and in the lead up to the most terrifying night of the year, Snyder and Francavilla—two modern masters of horror—collaborate for the first time with Night of The Ghoul, a bold and bloody reimagining of monsters that celebrates classic creature features.”

The “Scottober” celebration headlines comiXology’s presence at New York Comic-Con 2021. Fans at the convention can find comiXology located in Artist’s Alley at Booth #H1B5, which will be decked out for the occasion. Fans can also take a Scottober themed selfie between 11:00am – 6:00pm daily and get an electronic image for sharing and a commemorative print out.

Exciting giveaways include limited-edition enamel pins and exclusive We Have Demons posters (available while supplies last) which you can get signed by the superstar duo during their two signings. And don’t miss their live panel conversation moderated by The Beat’s Heidi MacDonald. Schedule of appearances below:

5:00pm-6:00pm—ComiXology Originals Presents: CONversations with Scott Snyder and Greg Capullo in Room 1A21.

In addition to what’s happening inside the convention, look for billboards outside the Javits Center and the nearby 7 subway stop.

We Have Demons #1 (of 3) written by Scott Snyder with art by co-creator Greg Capullo and Jonathan Glapion with colors by Dave McCaig and letters by Tom Napolitano.

In practically every folklore throughout history, there’s a struggle between angels and demons–beings of goodness and light and monstrous beings of darkness. But what if this struggle, this war for the soul of humanity, wasn’t rooted in the mystical or supernatural, but in science?

Lam was named after the first female angel, “Lamassu.” Lam never really understood her father’s devotion to their small-town Unitarian church. And when he dies under mysterious circumstances, she starts to question everything she thought she knew.

We Have Demons is full throttle entertainment by two comic book megastars, featuring action, conspiracies, secret organizations, monsters, mayhem, and a climactic war of good and evil with no less than the fate of the world hanging in the balance.

Clear #1 (of 6) by Scott Snyder with art by co-creator Francis Manapul and letters by Andworld Design.

Welcome to the future, a world where people can connect to the internet neurologically and mediate the real world through the lenses of their eyes, transforming reality. Everything can be skinned to fit a preference from steampunk to old fashioned Hollywood glamour. If you can name it, you can live it. You choose how you see the world and no one else knows what you’re seeing.

San Francisco, private detective Sam Dunes is working a case when he’s approached by his former police partner, who informs him of his ex-wife’s alleged suicide. But nothing about this adds up. And when he receives a gift in the mail, Dunes finds himself pulled into a wild and twisting mystery that stretches from the city’s deadly underworld to the even deadlier heights of the city’s wealthy and powerful elite.

Night of the Ghoul #1 (of 6) written by Scott Snyder with art by co-creator Francesco Francavilla and letters by Andworld Design.

It was said to be the greatest horror movie in cinematic history. Shot in 1936, “Night of the Ghoul” by writer/director T.F. Merritt was meant to sit beside “Frankenstein” and “Dracula” as an instant classic… But the legendary film never made it to the silver screen. Just before editing was finished, a mysterious studio fire destroyed the footage and killed the cast and crew during their celebratory wrap-party. Rumors of the doomed film’s greatness persist to this day, but no footage from it was ever recovered…until now.

Forest Inman is a horror film obsessive who digitizes old films for the famed Aurora movie studio. When he stumbles across a seemingly forgotten canister of footage, his discovery sends him on a dark odyssey to the California desert, where he’s warned by a mysterious old man that the film’s ghoul is far more than a work of fiction.

Night of The Ghoul is a dazzling work of contemporary horror, intercutting between the present-day narrative and the story of the lost film (drawn by Francavilla in stunning black and white).

Since debuting in 2017, comiXology Originals has continued to feature an impressive list of exclusive content for all types of fans, including the Eisner Award winning titles Afterlift (Zdarsky/Loo) and Harvey Kurtzman’s Marley’s Ghost (O’Neil, Kendall, & Wheeler), the Eisner Award nominated titles The Stone King(McDonald/Crook) and Promethee 13:13 (Diggle, Martinbrough & Jock), and most recently, the Harvey Award nominated title Adora and the Distance (Bernardin/Kristantina).

For more updates on comiXology Originals, check out: comixologyoriginals