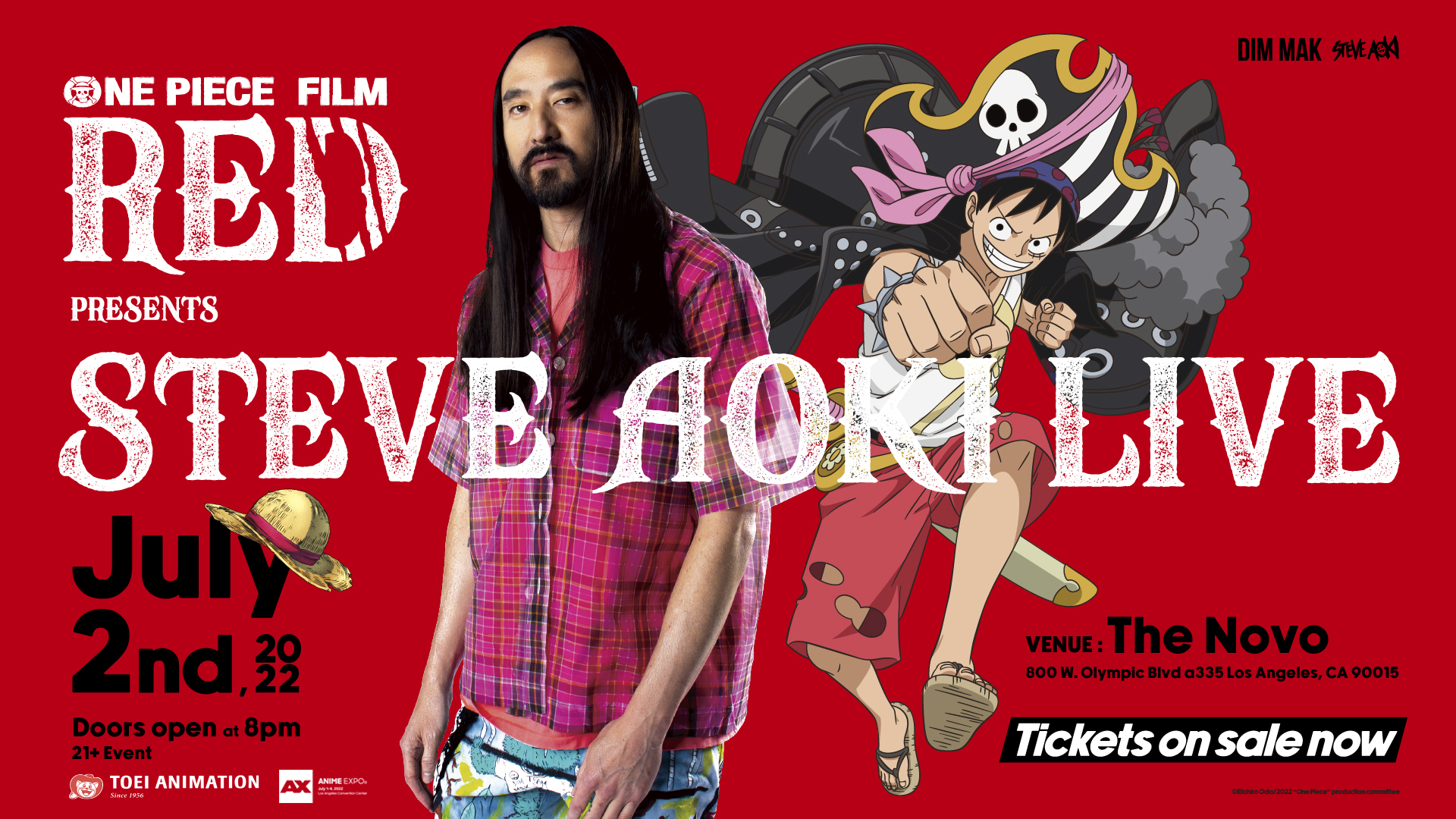 Legendary anime studio Toei Animation Inc. in collaboration with the Society for the Promotion of Japanese Animation (SPJA), the non-profit organization behind Anime Expo, today announced an exclusive Anime Expo performance by two-time GRAMMY-nominated artist Steve Aoki to promote the upcoming release of “One Piece Film Red,” which will take place on Saturday, July 2 at The Novo in L.A. Live.

Tickets to the event, which is part of Anime Expo’s 2022 programming lineup, will be available exclusively to Anime Expo attendees. Premier Fan badge holders have early access to tickets now at showclix.com, with tickets for General Attendee badge holders opening on Thursday, May 12 at 12:00pm Pacific. Fans can register for an Anime Expo badge at anime-expo.org/register/.

“One Piece Film Red” is the 15th film from the worldwide hit anime franchise from Toei Animation based on the “One Piece” manga series created by Eiichiro Oda. First announced on November 21, 2021, “One Piece Film Red” will be produced by Eiichiro Oda and Toei Animation, and directed by Goro Taniguchi. The movie is scheduled to premiere in Japan on August 6.

“We’re thrilled to celebrate the upcoming release of ‘One Piece Film Red’ with this special performance by Steve Aoki produced exclusively for fans,” said Lisa Yamatoya, Director of Global Marketing of Toei Animation Inc. “Anime Expo 2022 provides the perfect backdrop to promote this exciting new film from creator Eiichiro Oda. Fans will not want to miss this opportunity to part of a one-of-a-kind One Piece franchise experience.”

“This year marks our first in-person Anime Expo event since 2019, and we’re incredibly excited about partnering with Toei Animation Inc. to host a special performance by international superstar Steve Aoki,” said Ray Chiang, CEO of SPJA. “Through both his music and fashion collaborations, Mr. Aoki has been deeply connected to the anime community for decades, making him the perfect artist to help welcome our Anime Expo fans back home to Downtown Los Angeles in 2022!”

“I have been a huge fan of Toei Animation from as early as I can remember.  One Pieceholds a special place in my heart because I have always been impressed by the resilience and determination of Luffy. His happy-go-lucky demeanor in the face of adversity inspired me in many ways.  Having this opportunity to join forces with Toei Animation to commemorate their upcoming ‘One Piece Film Red’ is an immense honor. Not only am I performing during Anime Expo, but my brand Dim Mak is also releasing a merch collab at the same time,” says Steve Aoki.

GRAMMY-nominated artist, DJ and producer Steve Aoki is globally renowned for his cross-genre discography, which boasts three Platinum singles, six Gold singles and over ten Top 10 radio records; moreover, he averages 17.2 million listeners per month on Spotify and a monthly reach of 77 million across all platforms. Aoki is further known for founding DIM MAK, a lifestyle brand and record label credited with discovering influential acts like Bloc Party, The Chainsmokers, Bloody Beetroots and The Kills. The fashion side of DIM MAK has also collaborated with numerous iconic Japanese IPs including Toei Animation’s Dragon Ball and One Piece franchises.

Anime Expo badge holders will be among the first to have access to DIM MAK’s highly anticipated “DIM MAK x ONE PIECE” collaboration including Aoki-designed hoodies, tees, accessories, and skate decks all featuring original artwork from One Piece’s iconic Wano Arc. Fans can purchase “DIM MAK x ONE PIECE” merchandise all weekend long from Dim Mak at Booth #3326 in the Main Exhibit Hall.

For all the latest news and information about “One Piece Film Red,” visit the official movie website at onepiece-film.jp.

Check out the teaser for One Piece Red below: