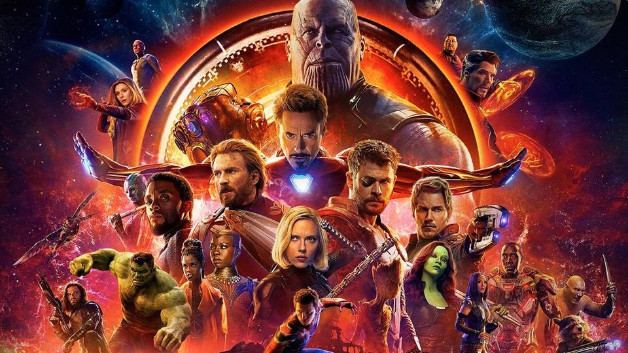 It has been 10 years since the first Iron Man hit the big screen. Back then the idea of an Iron Man movie was a risky venture and no one knew how it would be handled. No one expected an Iron Man movie to be great let alone succeed, but it did. The first post-credits scene introduced Nick Fury discussing the idea of an “Avengers Initiative”. This little moment was just an inkling of what was to come. A decade filled with films and television shows that intertwine into a giant multi-faceted universe. The past decade has been filled with some of the best superhero movies of all time and the Marvel Cinematic Universe is responsible for many of these films. Each film added another layer to this World and one trail that has been strung along since the first Avengers was the looming threat of Thanos and his search for the Infinity Stones. With all of this build up it had to lead to something. It had to mean something. Avengers:Infinity War is this culmination and it does mean something. Infinity War is the result of the decade of preparation and there is an incredible level of hype around it. Fans of the MCU have been waiting for this film’s release and the big question is whether or not it is worth all of the build up. I went in not knowing what to expect and came out with my expectations exceeded. Here’s my Spoiler-Free Review of Avengers: Infinity War.

The film’s plot is layered and complicated. There isn’t a whole lot I can say about the details without spoiling certain events. In general the plot revolves around evil Alien Badass Thanos and his continuing search and discovery of the 6 Infinity stones. These stones have been seen in many of the Marvel Cinematic Universe films. Each stone has its own properties and abilities and when collected they have power which can make the person wielding it unstoppable. This forces the heroes to come together whether it be meeting up again or meeting for the first time. This film bridges the Worlds of the Aliens with that of Earth’s heroes in a manner that not only makes sense, but also is extremely exciting.

While there isn’t much that I can discuss about the plot I can explain that the plot is one of the best aspects of the film. Bringing all of these characters together must have been a daunting task. Each character has their own backstory to contend with as well as their own tone. When the film is with the Guardians of the Galaxy it feels like a Guardians film and same goes for when the film focuses on Tony Stark or Doctor Strange. These tonal shifts work for the most part. While the middle of the film slows down a bit because of the need to tell these characters’ stories it doesn’t break the film at all and their still is a lot of joy to be had from seeing their continued narratives. The films length gives it the room it needs to breathe and it certainly feels like the massive event that it should be. There is a lot at stake as well as a lot of surprises that work extremely well in keeping you engaged throughout the film.

The film is directed by Anthony and Joe Russo with a screenplay by Christopher Markus and Stephen McFeely. Their combined talents with the solid script and the excellent direction really make the film feel different. It feels like a great combination of their talents and while I did love Captain America: Civil War I feel like the Russos handled this film better than that one in not only direction, but in character interaction and overall narrative. It’s a well handled and balanced film for something filled with so many different tonal shifts. All the credit goes to this team who crafted the direction and the narrative and they each deserve recognition for bringing this larger than life story to the big screen and pulling it off well.

Some of the other talent that needs mentioning is the actors in the film. They each bring their A game to this project. Their performances are a step up in every scene because of how tense the film’s narrative is. It’s great to see how each of them interact with one another whether it be again or for the very first time. It’s impossible to mention the acting talent without mentioning what I think is the standout of the film. Josh Brolin portrayed Thanos and he steals the film. Whenever he is on screen he demands attention and his subtle yet powerful portrayal of an evil character with grandiose goals is phenomenal. He is easily the best villain that Marvel has had. The rest of the film’s cast succeed in reacting to and trying to overcome Thanos and it is one of the best aspects of the film.

On the technical side this film is filled with extremely interesting and varied locations whether it be physical locations or effects heavy alien worlds. The CGI in the film is able to render most of these locations excellently as well as look beautiful throughout  and this includes its cinematography. With as big a film and as much effects as it has the film does have a few areas where the CGI looks not as good and it’s mostly noticed on the characters that are completely CGI. In other areas of the film the CGI looks fantastic and is very real looking so it has a bit of both great and not so great effects. Even the weaker moments don’t break this film or pull away from all of the  other technical aspects including the fight sequences which are completely entertaining and well choreographed.

The musical Score by Alan Silvestri also plays a part and while it certainly isn’t as memorable as Black Panther it still fits the film very well and comes in when it needs to be. It heightens the tension and is worthy in its own right. The sound design is also great with some nods to the other films as well as giving every moment the right punch that it needs.

Overall Avengers: Infinity War is a spectacle in the Comic Book Movie genre. It’s larger than life and is a testament to the hard work that Marvel Studios has put in the past 10 years. The film is not perfect and it has some flaws, but those flaws did not hinder my enjoyment for this film whatsoever. I think that its balance of humor and some of the darkest moments of the series will surprise fans as well as keep them on the edge of their seat waiting for the next Avengers film. I highly recommend this film to anyone who enjoys these films and for anyone looking for one of the biggest and most ambitious superhero films of all time.