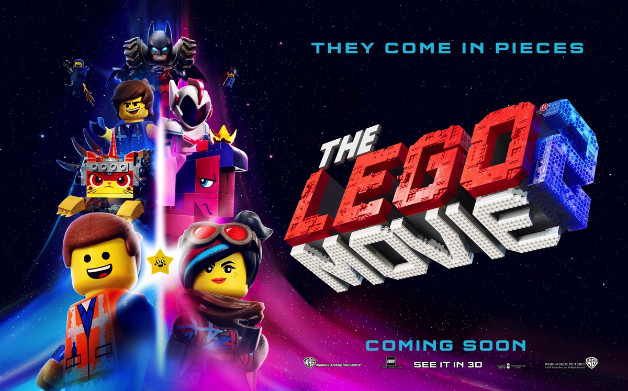 In 2013 the public was treated to a trailer from Warner Brothers Pictures announcing the release of a new film called The Lego Movie. What would seem like a senseless approach to sell Lego toys intrigued many people with not only the quality of said trailer, but also how many celebrities agreed to be in the film. The film’s animation was breathtaking and people didn’t know whether the film was done using stop motion or by computer. When the film finally released in 2014 it was extremely well received and became a surprise hit with its great use of comedy, storytelling, and a great amount of heart as well. The success of this film led to spin-offs in the style but a proper sequel took its time and releasing very shortly is the long-awaited sequel, The Lego Movie 2: The Second Part. With it’s release coming up I had an opportunity to see the film early and I didn’t know what to expect, but I wanted it to be a fun follow up and it certainly delivered on all fronts. Here is our spoiler-free review of The Lego Movie 2: The Second Part.

The plot of the film is based around knowledge of how the first film ends. It is a direct continuation in that we get a chance to see what happens when the sister’s Duplo blocks invade Bricksburg and the devastation and destruction that brings with it. Five years after the Duplo invasion the city of Bricksburg have transformed into the city of Apocalypseburg where everything is dark and gritty except for Emmett who keeps his sunny disposition. Their lives are completely different, but before they know it a new enemy from space invades and kidnaps several of our heroes. It is up to Emmett and a new hero known as Rex Dangervest to retrieve our heroes and restore everything to how they should be.

The film’s plot is heavily contingent on being familiar with not only the story presented in the first film, but also the themes of the first film. The first film has a section that reveals that the Lego characters are in reality a metaphor for the live action sequences of a father and son and how the legos fit into their lives. The second film without spoiling plays into this and it works beautifully giving these films the ability to tell fun and ridiculous stories with multiple characters from multiple properties while still having a grounded emotional approach. This brilliantly allows the comedy to be just one part of it with the heart being at the center. The plot is a great continuation even though it overall may not hit the exact cleverness that the first film did. This one still feels like a nice continuation that has a lot to offer as well as having clever twists and turns. This film is one of those great family films where the plot can not only work for kids, but adults can also appreciate the emotional layers and thought put behind it. It’s a perfect sequel in that regards from a narrative perspective.

The Lego Movie 2 is a sequel unlike quite a lot of sequels. It was initially handed to a different team to take on the project because of the massive success of the first film, but by the end the original writers, Phil Lord and Christopher Miller wrote the script for the film making it have a very similar feeling and quality to the first. They also directed the first film, but this time around Sky High director, Mike Mitchell took on the position of Director. While Lord and Miller’s absence as director can be felt at times it doesn’t hinder the fact that their storytelling is still ever present. They are extremely talented and Mitchell did as good a job as any filling in as Director for this project. He had to visually lead a team to create brand new settings in animation while also handling sections in live action, which takes quite a bit of talent and effort. His past history with animation and live action came in handy while making this film and you can certainly tell that there was an immense amount of work put into this. Like any director his job was to also dictate the entire crew in how they handle things, but also the cast in how they perform each of their characters.

With The Lego Movie series they have had a great track record of a great cast to bring these characters to life and this film is no exception with the majority of the main cast making a return to the characters they portrayed before. They all continue to do a great job with Chris Pratt standing out as the happy go lucky Emmett, but he also takes on a second role voicing the mysterious hero, Rex Dangervest. Pratt is the main protagonist and his performance is just as excellently done as it was in the first film with the brilliant ability to deliver his comedic lines, but also being able to portray the heart of the character. Elizabeth Banks plays the troubled Lucy returning and she does a great job at being the rational voice for the majority of the film. In addition to the returning cast there is a new villain in the form of Queen Watevra Wa’Nabi voiced by the extremely talented Tiffany Haddish who has made her way around so many films as of late. Her performance in this role is multifaceted in her ability to sing musical numbers as well as delivering her lines in both a silly and sinister fashion. She’s one of the most interesting parts of the film and Tiffany definitely deserves praise for this voice performance. While certain actors have been mentioned here it’s important to note that every performance in the film is worthy of acknowledgement and the film benefits from the comedic and emotional talents on their varied cast members.

When discussing the technical aspects of this film it is crucial to take a look at the animation of the film considering it’s medium and how unique it is. When The Lego Movie was first released there hadn’t been any animation style like it before and it was incredibly impressive. The film uses a unique technique where they digitally created lego blocks to work like actual legos so that the animators would build all of their characters and worlds just like how you could use real lego blocks. In turn this gave the film a perceived stop motion look to it while in reality being completely digital. It was an incredible process that delivers brilliant results and The Lego Movie 2 uses the same technique to similar great effect. It’s incredibly gorgeous in terms of animation, which is unique to the Lego films as of late. This style has been working out great for them and for Warner Brothers. This particular style of animation lends a sense of believability to the World and to the characters that inhabit it. It was incredibly smart in showing how versatile the team was in animating and how versatile Lego is as a brand.

One other aspect from a technical perspective that is worth analyzing is the music in this film. The first film brilliantly used the extremely catchy song, “Everything is Awesome” as a main theme and it helped to set the tone. The sequel does circle back on the song in moments, but it also adds more depth in having more full on musical numbers. It feels more like a musical this time around and that is not a bad thing. The numbers not only add to the story and the theme, but they certainly add to the comedy persistent in the series. The music is great and the film is benefitted from this even in the sections that rely on the score which work well within the tone and the emotional resonance of scenes. It’s very well put together as a film overall and technically this film stands out amongst many other animated films. This has been an area that is certainly worthy of the praise it received.

The Lego Movie 2: The Second Part is a great sequel. Its use of comedy, action, and emotion leads to an incredible family friendly film that anyone can find enjoyment in. If you walked away loving the first film you will certainly at the very least like the film. It doesn’t reach the same highs that the first one did, but it definitely is worthy in it’s own right and is a must see. I highly recommend it.