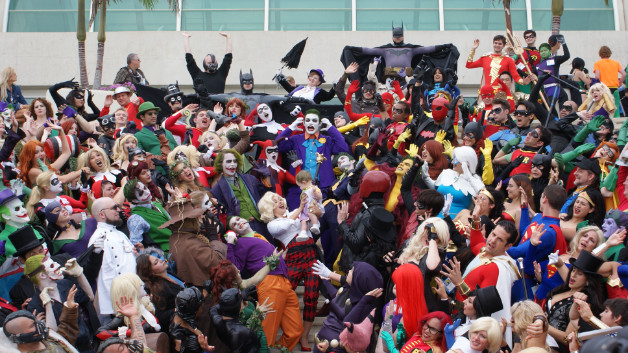 The Geek Community is as vast and as broad as any community or fandom is. This community has the ability and potential to do so many good things and so much good has happened. I have noticed that people are drawn to geek culture for not only the art associated with it, but also the community that comes with it. People with this types of tastes in media often look for others who share those same tastes so they can enjoy these things together. It is essentially what Up Your Geek is trying to accomplish by building a community of people to fall back on and to celebrate good, but things aren’t always good. In fact there has been a large number of people who exhibit incredibly toxic behavior. Their actions cause many people to be singled out for being different and this very often includes, lgbt people, people of color, and especially women. They are often the targets of Gatekeeping and it’s a dangerous tactic that helps no one. It’s an incredibly important topic to discuss so that the community can become a much healthier and safer place for all.

If we are going to look at the issues that Gatekeeping creates it is really important to take a step back and look at what Gatekeeping is as a whole. In the very basic definition it is the act of keeping someone from something and controlling what other people have access to. It is like being a guard in front of a gate actively not letting people in. Gatekeeping is a term used to describe a plethora of things and it has meant several things for several different occasions, but gatekeeping in Geek culture is something completely different.

When I discuss Gatekeeping with Geeks I more clearly am talking about the predominantly white men whose goal is to have a blockade for the things that they are passionate about.They feel like there is a certain level of knowledge of understanding involved with being a part of certain fandom communities and people have to meet their standards. If these set of expectations aren’t met then they feel the need to out them as a “fake fan”. While many individuals face the ire of gatekeeping fans, the gatekeeping goes beyond casual criticism of understanding of a fandom. It goes to the race, sexuality, and very commonly gender of the individual they don’t deem worthy of being a fan. These aspects of someone’s being are often targets for unfair gatekeeping strategy and women often face the brunt of it going back to the misogynist belief that women can’t be into geek culture unless they are faking it for attention, which in itself is a ridiculous statement.

The Gatekeeping in essence comes from very inaccurate cultural perspectives on what Geek Culture is. While things are changing it’s been long made fun of that people who enjoy Geeky things are only men who live in basements. This sentiment is entirely negative, but it has stayed around so long that certain men have felt that there is truth to this in that men and more specifically white men feel like they are the only ones who can truly be into Geek culture. This dangerous mindset causes direct harm to certain individuals more so than others and it’s important to look at how it does this.

Who Does It Directly Harm?

The gatekeeping tactics perpetrated by these individuals have very real consequences, but the people that get harmed the most directly are the targets. The victims of gatekeeping methods and attacks hurt people and specifically people in more marginalized spaces.

The biggest group harmed by angry male outcries of gatekeeping is that of women. Women are often the targets of scorn from men. While other Geek spaces have opened for women to have a more vocal presence, the Geek culture of gaming has had an issues of Gamers attacking women. These attacks on women discourage other women from being more vocal about their loves in fear of being labeled as a fake or being told they are worth less because they happen to be women. Bigotry in any form is harmful to the victim and their feeling of self-worth. Their confidence can really drop because of people who feel the need to exert their shitty biases on to others. These attitudes about women persist even though time and time again it has been disproven. Women like any person has the capacity to enjoy a litany of entertainment that’s traditionally seen as geeky. Women make up a massive market in not only gaming, but also in every aspect of popular culture. They are a driving force of individuals and the pushback against these women is utterly ridiculous. While women make up a large portion of the audience for these works of art they are also constantly told that they don’t belong. It’s easy to see why so many people want to divorce themselves from a geeky label even if they like geek related content. The sexism has essentially pushed people away as opposed to bring people in and all it ends up doing is keeping the stereotype of geeks mainly being lonely men ever-present.

In addition to the harm it does women a lot of these Gatekeeping geeks tend to be white men, who see people of color as a threat to their idea of what the community should look like. They often feel like they need to control who can enter and people of color are targets of overt racism. They don’t enjoy sharing their heroes or their spaces with them and it is incredibly regressive. They often justify their bigotry with the misguided thought process that racism is ended. They don’t see their actions as inherently racist. They hide their bigotry under making jokes or getting super offended over more diversity in comics, films, games, and television. Their disgust of diversity threatens what they perceive the world to be and they lash out with gatekeeping techniques through making racist jokes or harassing individuals. In addition to racial attacks we also see a consistent attack of those that fall under the LGBTQ banner and most noticeably with Transgender individuals. They throw around dangerous memes making fun of Trans people to make them feel better for their bigoted uncomfort in dealing with these people.

The victims of targeted gatekeeping deal with ramifications of feeling different and it is completely unfair, but doing this not only harms the victims. It harms the Geek Culture as a whole.

What Negative Impacts Does It Have?

While these perpetrators of Gatekeeping often feel like they are doing a service to their community they are in fact doing quite the opposite. Hateful and harassing actions actively makes their community regressive. There is no change in their view and not being able to change in itself is harmful.

The attitudes present in these groups that drive others away want things to stay the same at all costs and that includes who gets a say in things. They genuinely are afraid of things becoming different from what they expect and they desperately cling on to the control they feel they deserve. This is harmful in multiple ways, but a big way is that less diverse voices that are allowed to speak and to create the less that people learn. It creates communities of individuals that seek hatred rather than love, which is the antithesis of what a passionate fan community should be. Hatred rather than love just  continues to spread like a disease. It eats away at a person’s ability to empathize with others in addition to socialize with other people outside of their bubbles. This isolation leads to more acute cases of depression and other forms of mental issues. While some people in these groups feel great about their actions it is just a way to mask their own unhappiness with themselves.

Gatekeeping has lead to the rise of dangerous ideas that discourage different voices to have a say in the mediums they cherish. There are even movements like Gamergate and Comicsgate that actively push against all aspects of diversity. The Gamergate controversy sparked from rampant misogyny in attacking a woman because her ex-boyfriend wrote terrible things about her. The people who supported this were mainly men who were increasingly anti-feminist. Comicsgate was a more recent movement to remove diversity from comics and tried to argue for similar a similar ideology.  In both instances the perpetrators masked their intentions under the guise of maintaining integrity and claimed it came from an honorable place as opposed to a racist or sexist perspective. In reality what they want is to remove women, people of color, LGBTQ people, and any other marginalized identity from having a say. They want white men to be the continued dominant force in Geek communities because they believe them to be superior. While not outright declaring for white supremacy ideas they inherently are trying to achieve that because they feel entitled to it. This entitlement hurts everyone.

The advocation of removing people they don’t see as being a part of their perfect community actively harms creators. Silencing diverse voices especially in art allow for things to become stagnant. Without a variety of perspectives the art they love will become less and less relevant. It will continue to retread the same areas we have seen before and they won’t be allowed to grow to include more interesting perspectives. This Gatekeeping determined to remove other people from the community is very shortsighted in that it fails to see the value in the people they despise. It sees them as nothing worthy of their superiority, but in reality the differences that they hate are the very thing that can continue to make the art even better.

The act of Gatekeeping is something that needs to be curved within the Geek community. It’s a practice that essentially makes certain groups feel superior to others because they feel it’s their specific duty. It is an ego stroke based upon irrational hatred and it is currently hurting the community that I hold dear. I love the Geek community and using Up Your Geek to spread my passion in a positive way that is simultaneously inclusive, while also being fun. That is what my community means to me and I hope that Gatekeepers can learn to take a step back and realize how harmful their actions have been.