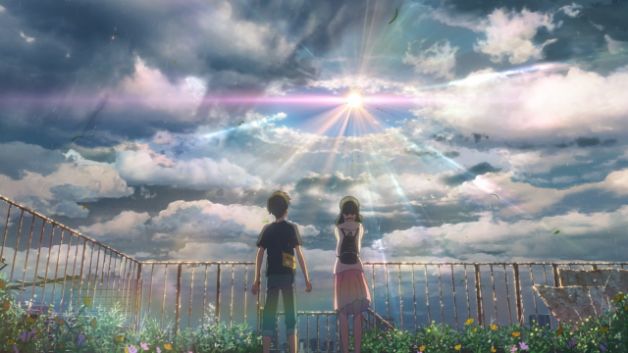 One of the longest articles that I’ve written for this site was one of my earliest. It was on how Western Animation needs to embrace making more mature content with the maturity being in its themes and execution of those themes. Japan has continually found ways of balancing animation meant for families while also offering films meant for an older audience. The latest critically acclaimed entry in Japan’s vast contribution for animation is Makoto Shinkai’s new beautiful vision, Weathering With You. It’s a film that focuses on telling a story about characters and lingering on the emotions and themes the characters represent. These films that are willing to connect to the audience in such a way are worthy of discussion and this film is definitely worth giving a fair analysis of. Here’s our spoiler-free review of Weathering With You.

The film’s plot centers around a young boy who goes to Tokyo to start a new life. He’s in a new environment, the streets are cold, and he’s looking for a steady job. While there he gets employed to write for a conspiracy theory magazine and investigate this girl who has the ability to control the weather and make the sun come out even when it’s raining. This all happens while Tokyo is facing the longest running continuous rain. The friendship and bond strengthen  while learning the truth of her amazing abilities.

What’s fascinating about this film is something that I feel is shared with a lot of Japanese tendencies for storytelling as opposed to western, which is the moments that put the emotions of the scenarios above telling an overly complicated narrative. A lot of Western media gets caught up in the intricacies of the plot, but in a lot Japanese films there tends to be time to slow down and allow for the emotions to breathe and resonate. This film exemplifies this in a lot of ways and because it does this it makes it stand out as an emotional narrative experience. It’s hard to find an animated film from the West that really takes the time to lay out a more mature narrative that delivers on themes and emotions in quite the same way many Japanese films do and that helps this film in a sense stand out. The story is incredibly unique and often times will grab you emotionally because it spends that time to allow for quiet moments with the locations and the characters. It’s a well written film with great characters that will leave an  impact on you.

The film is the culmination of multiple talented artists and creative people working together, but it exists because of the mind and imagination of the writer and director, Makoto Shinkai. Shinkai’s best known for his masterpiece, Your Name and his impressive talents as a filmmaker shine in this film as well. He has the ability to use the animation and the teams he works with to deliver thought provoking and emotionally resonant stories that are incredibly gorgeous to look at. The way in which his direction has crafted this films is nothing short of impressive and there’s a lot of inherent talent there that is infectious and I’m sure the energy, passion, and talent spread to all the departments and crew working underneath him to create this film.

When discussing film and reviewing them here I usually touch on the voice actors in relation to the direction, but since the version I saw was dubbed in english I’d like to take time to give praise to the actors who spoke english for this version of the film as opposed to the original Japanese voice actors who portrayed these characters. The English cast was filled with talented actors including Riz Ahmed, Lee Pace, Ashley Boettcher, Brandon Engman and Alison Brie. Each of these talented actors brings something new to each part and while I’m not familiar with the Japanese performances I was still impressed how each character’s moment of dialogue was handled. They each bring life to their characters and are worthy of praise in and of itself. These talented individuals do what is needed in service of the story and none of them sound like they are trying to overreach in their approach. They are all very gifted and as someone who mostly watches Dubbed Anime I think that they did a great job with the work and the material they were given. Matching English voices to Japanese lip flaps seems rather difficult, but it’s all worth it in the end and I’m glad to have heard their voices having seen this in its theatrical run.

One of the most important elements to any animated film is the work that goes into every frame to bring this story to life in a way that is compelling and moving. This film had no trouble in delivering on this flawlessly. The film doesn’t cut corners when it comes to how each location, character, and moment are animated. I felt like any still from this film could easily be an incredibly gorgeous piece of art. Each movement that is presented and the backgrounds are phenomenally detailed in that it feels normal. There’s a lot of specific details on Tokyo that are slightly altered to fit the animation style, but they feel lived in. It’s very obvious the animators really took into consideration the reality of that city and transposed that onto their own created World. This not only makes this film stand apart, but is also just damn impressive. Every shot feels like it should and it engrosses you into the narrative so that you care about everything that happens.

The sound and music design is also excellent with Japanese pop band Radwimps continuing their collaboration with Shinkai. Their original songs are quite beautiful and catchy with English variations of the songs sounding beautiful as well as the Japanese versions. That heightens the movie’s emotional impact and gives a lot of depth the already visually splendid scenes. The movie sounds just as good as it looks and it’s worth it for this alone.

Weathering With You is a beautifully told film that continues Makoto Shinkai’s talented filmography in a way which does a lot of new things. I really hope to see whatever film he continues to make in the future because he really understands how to make interesting films that feel new even with the competition of similarly talented Anime filmmakers who attempt similar things. This film does not have the emotional resonance of his previous film, Your Name, but it does have it’s own very high merits and I loved getting the opportunity to see this in theaters. I highly recommend this film if you want a new and emotional Anime journey to embark upon. It’s very much worthy of your time.