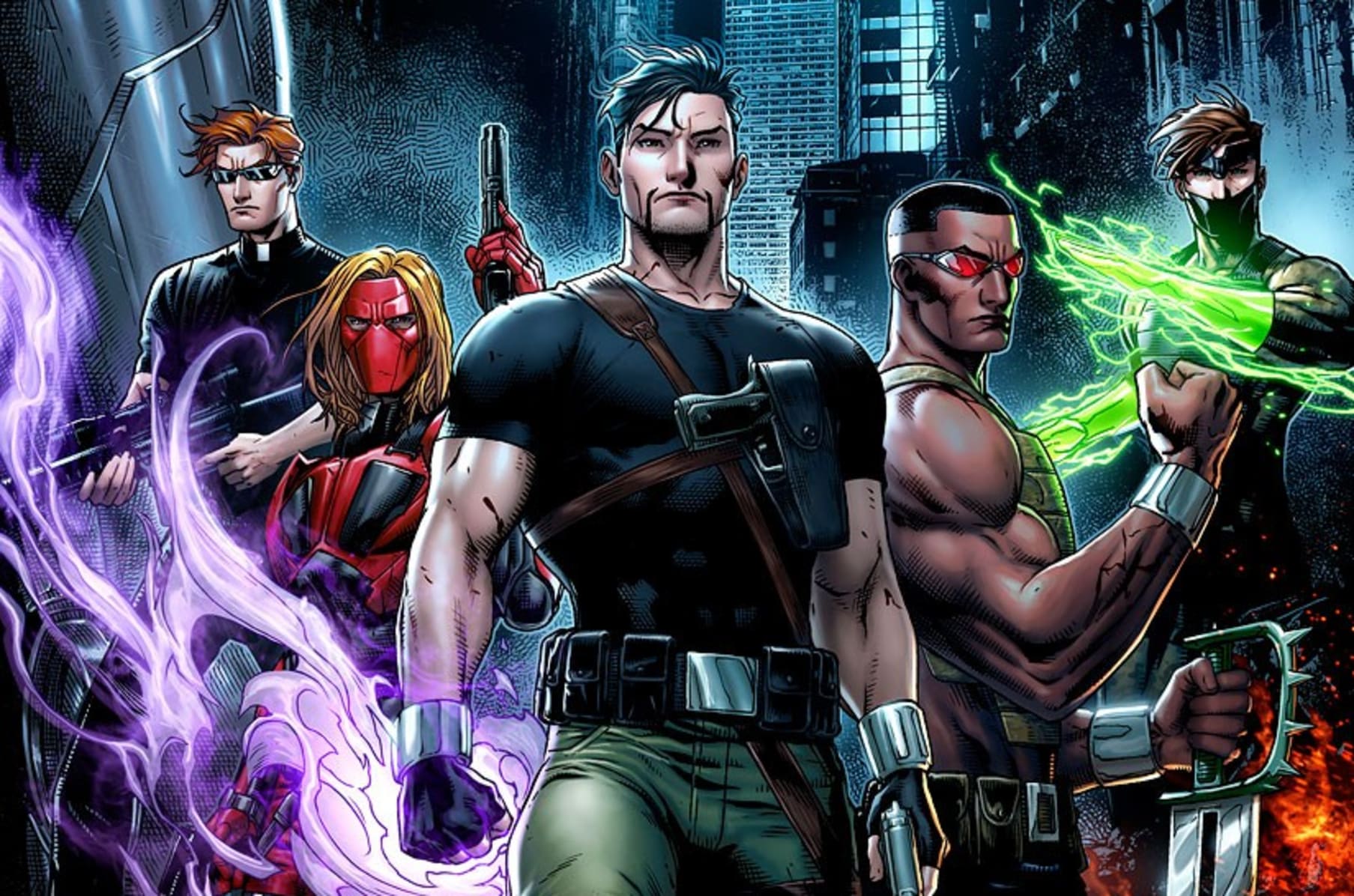 In the past few years, there has been a completely new market that has opened in the world of comics: crowdfunding. There are several reasons for this rising market, but ultimately the end result can only be described as a major success. These crowdfunded comics are raking in more sales than even the most top selling books on the direct market with figures going well into 200 and even 300 thousand per project. One of the pioneers of this market is a man named Richard C Meyer. Meyer is a figure of much controversy in the industry, and his feud with Mark Waid is something that has loomed over the industry for almost 5 years. However, we are not here to talk about the polarizing nature of Meyer’s personality or even his defamation lawsuit against Waid, we are here to talk about his comics, specifically: Jaw Breakers: G0D King. G0D King is the second installment of Meyer’s Expendable style superhero team, and it’s a book that I have anticipating to read ever since I finished his first book Jaw Breakers: Lost Souls, which while it had a lot of potential, had a lot of problems. Well, right off the bat, what I can tell you is that Meyer’s has learned from almost every mistake he made in Lost Souls and that G0D King is without a doubt a much better book. The key to that sentence though, is almost, and the one mistake he didn’t learn from, is arguably the most important: pacing the narrative.

If you have ever watched any of Meyer’s videos on his YouTube channel Comics Matter With Ya Boi Zack! (Formerly known as Diversity in Comics), you know that Meyer is a fan of fast pace narrative that was popular specifically during the late 80s through the 90s era of comics. This is very prevalent in his work, and the way he coordinates the dynamic sequences of paneling with his artists is on a whole other level in this book that pros in the industry should pay attention to, and learn from. However, even in those fast-paced narratives, you need to slow down at times to allow for the weight of actions to sink in. Having served in the military, there is an expression I know he is familiar with, as it is a mantra used in everything from shooting to room clearing that is just as viable in writing: slow is smooth, smooth is fast.

This is an issue that presented itself throughout Meyer’s first installment Jawbreakers: Lost Souls. Things happen in such rapid succession that it’s really hard as a reader to keep up or even have the emotional investment needed for moments of gravitas presented in the book. This is a problem that continues in G0D King. I remember having to break out my copy of Lost Souls when one of the characters, HellPriest, shows up with a massive, crazy looking sniper rifle called the God gun. I wondered if I had missed the part where he had acquired that gun. What I found was that while the gun was mentioned as a potential way to defeat the big bad, there was never any page or panel showcasing how Hellpriest acquired it. In addition to this, there are bits of dialogue that feel unearned for similar reasons. The leader of this group, Silkworm, has all these moments where he showcases deductive abilities that aren’t even remotely hinted at earlier and as a result, these scenes come off as forced plot progression. Comics is a visual medium, taking the time to show your audience things is what allows for the suspense of disbelief and really appreciate what your trying to put out there.

It’s really a shame because my favorite parts of this Jawbreakers book were the side stories that delved into support characters in the book. Xaxi Respawn gave insight into who the character was before the team met her in Lost Souls, the origin of Devil Dog written by Chuck Dixon (with I’m sure a lot of creative input from Meyer) was the very thing that was missing in the first book to have the character’s death toward its end hit an emotional chord because it provided depth and character to a 2d drawing on a page. There is so much potential in these books, the art is fantastic, and Meyer writes diverse character thought better than most of his contemporaries, and character dynamics of his squad are fun, but he needs to slow down. Breaking up the main G0D King story to focus on HellPriest as he goes on a solo quest to locate the God Gun would have been a great way to explore that character and even have him come to the realization of the price one has to pay to use it. Rather than just having a few pages of Knife hand’s failed attempt at trakcing down and killing his piece of filth father, have an entire side adventure showcasing him tracking down his father and taking down people. Meyer has a rich tapestry of characters in this team if he’d just use them to pace out his narrative. These books are so close to being a smash hit, and it’s just frustrating to see them not quite live up to their potential.

Meyer has already announced his next installment for Jawbreakers as a prequel book called Grand Bizarre. I hope that he takes the time on this book to flesh out these characters and better pace his narrative in a way that will only make Lost Souls and G0D King better books when they are read in conjunction. Even though I spent this piece talking about the flaws in Meyer’s narrative structuring, this book is still worth a read. The art, side stories, and the preview of his upcoming sci-fi project (which looks absolutely fantastic) make the book well worth the 30 dollars it’s being sold for. Richard C Meyer really does have a chance to revolutionize the industry with this product. I am eagerly anticipating my copies of his other book Iron Sights, which is a border shootout book, and will be reviewing those as well when I get a chance to read them! If you are interested in checking out his book and supporting Meyer’s career, just click: Jawbreakers: G0D King!

Harley vs Harley: How ‘Harley Quinn’ Accomplished What ‘Birds of Prey’ Failed to
Stephen Amell Makes It Clear, No More Arrowverse