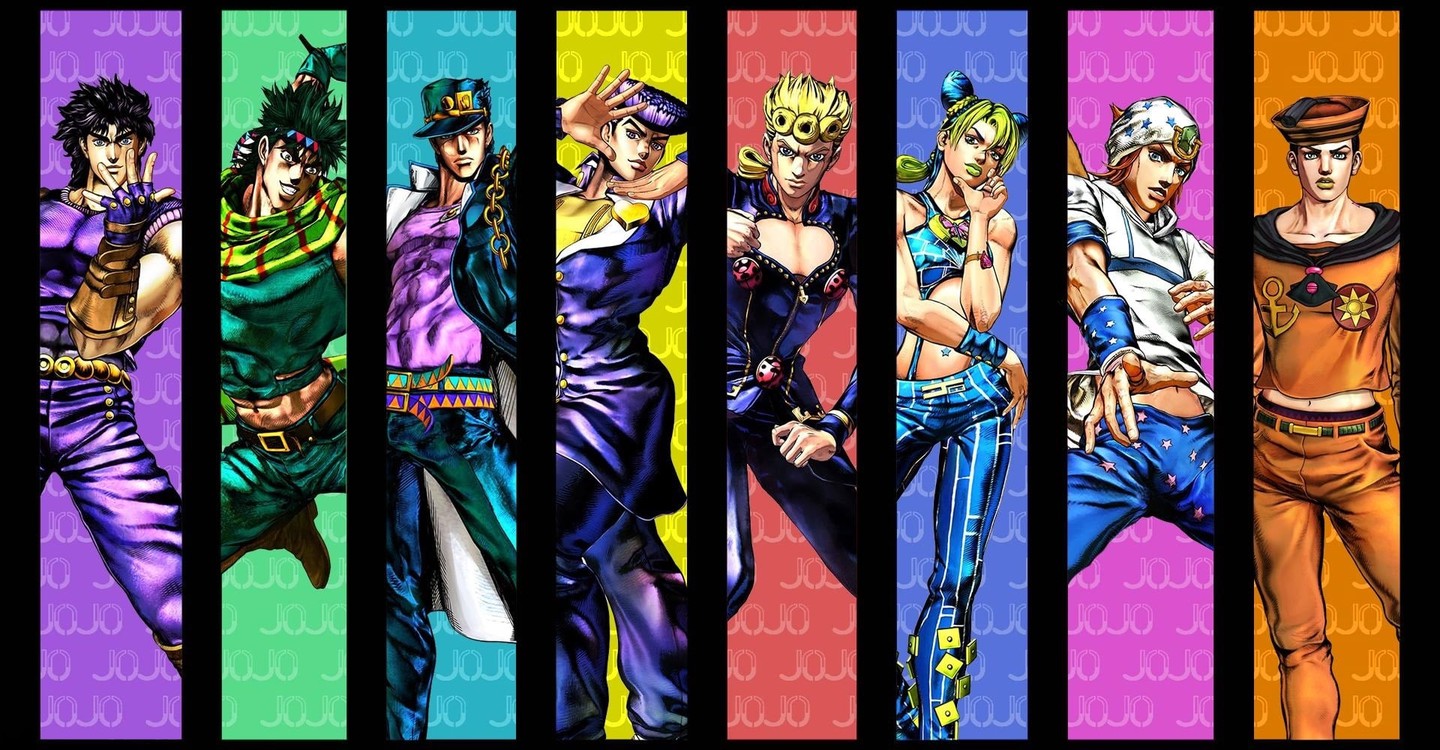 When you think of anime and manga there are certain tropes that people think of that can some times give it a bit of a negative connotation. But what if there was an anime/ manga that recognized those tropes and the connotations that came with them, and smashed their car straight into that skid to make the most ludicrous, over the top, fun franchise I have ever seen. In case you haven’t figured it out, I am of course talking about none other than JoJo’s Bizarre Adventure. With 5 seasons being released in the anime JoJo, I have found the most unlikely love for this aptly named, bizarre adventure. So if the tremendous amount of meme gold this series has produced isn’t enough to invest you, well I will.

One of the first things that people will notice when watching JoJo that makes it unique to other anime’s is that there is not one singular protagonist. There are many JoJo’s, each serving as a protagonist for their own respective struggle against villainy. From Vampires and Pillar men in the first two seasons, to wicked Stand Users (a Stand is an astral projection of a user’s inner spirit that each have their own respective abilites to usually include punching very, very fast) from the 3rd season and beyond, each JoJo has more than enough cut out for them as the gather a band of comrades to take down each threat. The second thing that people will notice about JoJo is that every character is so hyper masculine to the point where it’s almost gay, and then later they just abandon the hyper masculinity angle to pursue the other. While I do recommend watching every season of JoJo (in order!), I am going to focus this review on my two favorite seasons: Stardust Crusaders (season 3) and Golden Wind (Season 5).

The reputation of Stardust Crusaders precedes itself. It is by far the most well known arc of JoJo and is widely received as the best the series has produced. Stardust Crusaders has in fact been adapted twice, once as a movie in the 80s, and of course it also was recently released again as a part of the ongoing anime series. Jotaro Kujo (JoJo of s3) would be the series equivalent to X men’s wolverine. He’s a stoic badass who appears not to give a damn about anything, but has a heart of gold, and his fight with Dio Brando at the end of the season (which is built up brilliantly throughout the entire season) is one of the most iconic in anime history. There is not much to say about Stardust Crusaders that hasn’t been said already. It’ funny, it’s badass, and at times the show will rip your heart out and play with it right before your eyes. As you can imagine, with each season serving a new protagonist, no character is safe from the chopping block, so with that comes so character deaths that serve as super, emotionally poingnant moments in the series. This is especially the case with Stardust Crusaders as it has the highest amount of deaths from the main crew of characters of any season.

While Stardust maybe the most iconic season of the series, it is my second favorite. I am not going to lie to you, if someone had approached me and told me a year ago that one of my favorite seasons of an anime ever would be about a bunch of metrosexual Italian Mafioso who are fighting a war on drugs across Italy, I probably would have punched that person in the face and called them crazy. However, JoJo’s 5th series, Golden Wind is an absolute masterpiece. Golden Wind takes all the things that made JoJo great in previous season and cranks it up to 11. They even make the protagonist of part 5 the son of the notorious villain from both Phantom Blood (part 1) and Stadust Crusaders, Dio. As a result Giorno’s battle cry matches Dio’s and we are delivered quite possibly one of my favorite anime moments ever with the 7 page Muda. To sum it up, Golden Wind is a crazy ride that will make you laugh, gasp, and cry harder than you have in all the previous seasons as it appears that Hirohiki Araki, the manga’s writer and artist, really perfected his formula for the team dynamic in this arc. The same can also be said of the anime, while the animation remains the consistently high quality of its previous seasons, Golden Wind ups the antie in every other way, to the point where even the soundtrack will blow you away.

All in all Jo Jo’s Bizarre Adventure is the most anime anime you will ever see. It knows it, it embraces it and as a result you get a series that above any other series out there, has truly earned the brand of Bizarre Adventure. The show embraces its absurdity and honestly thats where most of its charm lies. I mean most of the names of characters and stands in the show are based off of 80s rock groups and smash hit singles. So be sure to check out Jo Jo’s Bizarre Adventure, parts 1-3 are on Netflix, 1-4 are on Hulu, and the whole series is available to watch on Crunchy roll. As a final note, don’t watch the dub on this one. I am not one of those snobs that degrades every dub in existence, but you really do miss out on a lot of the craziness when you go for the dub.