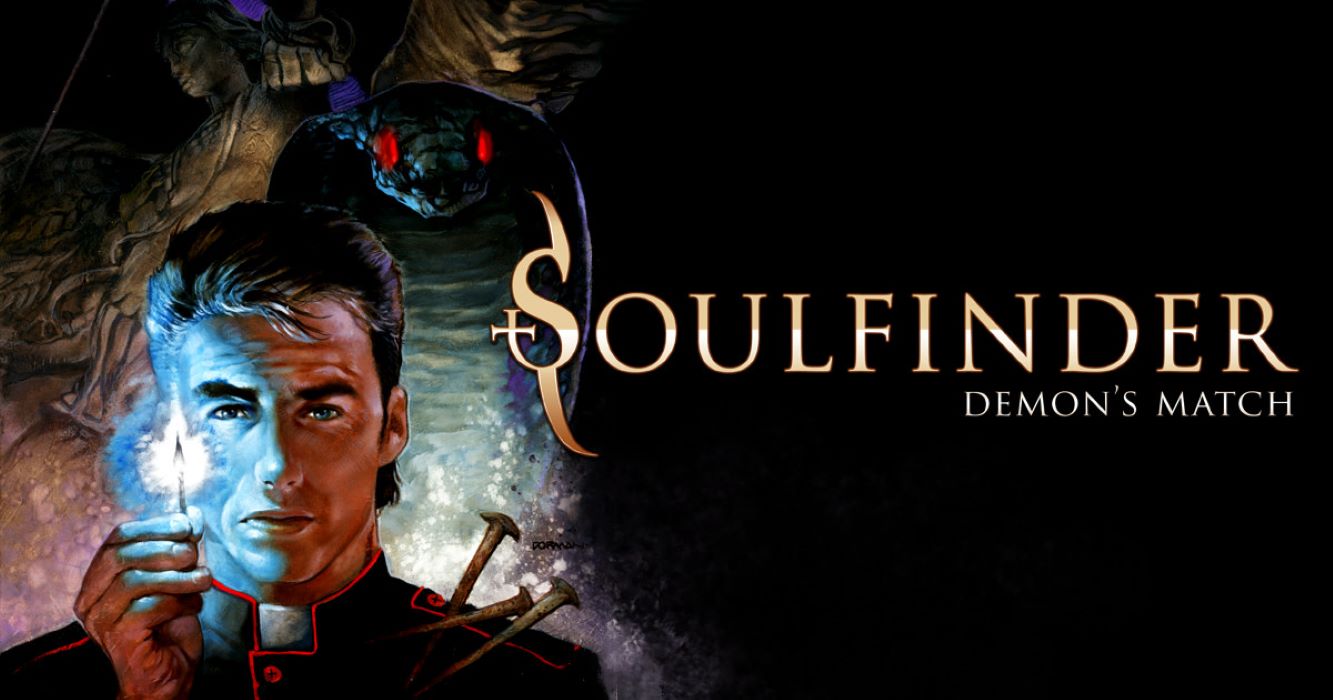 As a child of the 90s, I grew up loving monster stories. Some of my favorite comics were things like Ghost Rider, Blade, and Spawn, stories about bravery in the face of the creepy things that go bump in the night. As an adult, this love has continued. Shows like Supernatural, and stories like John Constantine’s Hellblazer books have been things that I have gotten into a lot. So when I first heard about Douglas Ernst’s book Soulfinder: Demon’s Match, to say my curiosity was piqued is an understatement. A story focused around Demon Hunting was something that hit my radar hard, and I was super fortunate enough to actually get in touch with Douglas, and he did me the great honor of sending me a copy to review before the campaign for its sequel is launched, and oh boy was I not disappointed.

Now I don’t usually do this because it’s not something I generally geek out about, but in this case, I just absolutely have to. This book is beautiful, and I am not even talking about the stellar interior art or beautiful cover, I am talking about the quality of the print itself. The square-bound cover is sleek, and the gloss on the interior pages enhances the artwork. Even the smell of the book has that new book smell and it’s amazing. Now that I have gushed about the book’s physical quality, I will dive into the part you’re here for. Let’s talk about Soul Finder: Demon’s Match.

Monster hunters and Exorcists are things that have been done a million ways to Sunday, and while that’s not a bad thing, it does make it very challenging to approach this concept with a new angle. However, Ernst finds a way to introduce a fresh new take by showcasing a whole other level of Catholic Excorcist: a Soulfinder. Soulfinders are a rare breed, a secret enclave of the Church designed for a whole other level of fighting demons. In fact, they are thought to no longer exist and there have been less than 100. So what makes these Soul Finders so unique? Well, only a priest that has been subjected to the trauma and loss of war can be a Soulfinder. That being said, that’s only the base criteria as becoming a Soulfinder requires a greater mental acuity to be constantly subjected to that trauma when facing Demons. Father Patrick Retter, a priest that serves as the parish exorcist in a small town in Maryland, is the most recent recruit to this program.

Retter is an expert in the study of the occult and fighting demons for the Catholic church and has been working freelance with the local Police Department with a bunch of strange cases with extranormal circumstances. While helping with the case he obtains an obsidian match that when lit makes Retter face demonic forces that have him face all of his trauma that he’s endured in life. It’s a lot but he is broken out of this trance before he is consumed by another priest, a Soulfinder named Father Reginald Crane. Crane is here to recruit Retter as a Soulfinder and explains their secret history, and aims to take Retter under his wings as they use these obsidian matches, revealed to be called Demon’s Matches, to track and fight a demon named Blackfire. Retter becomes the 79th Soulfinder and joins Crane on this crusade against the devil’s horde, using his own mechanisms against him.

I am not going to spend too much time talking about the art because it speaks for itself, the interiors of this book are gorgeous and the cover makes it a must-have for display. However, what I really want to talk about is how Douglas Ernst uses his faith to craft a fantastic and genuine story. The thing that I really like about this book is its authenticity. Douglas Ernst is a Catholic, and as such these characters and the infrastructure that surrounds them don’t feel like caricatures like you might have found in a similar style of book. Instead, these aspects feel completely genuine, and that goes a LONG way. Suspending an audience’s disbelief is key in good storytelling, and the authentic nature of Soul finder does just that. The Church isn’t presented as a perfect structure. The flaws of the organization are shown and acknowledged, but neither is it demonized, for like every creation of man, it may be flawed but is not inherently evil. Ernst’s faith also bleeds into this book in a way where it doesn’t feel like he’s trying to convert you or preach, but show that the strength of these characters lies in their faith and how that faith allows them to be open to others in need. It makes for great character writing and even greater storytelling.

If you are a fan of monster-hunting adventures, the struggle between heaven and hell, and stories of that nature, Soulfinder: Demon’s Match is the book for you. This book serves as a fantastic start of a series, and you can bet when Douglas launches the campaign for its follow up, I’ll be there with my money to contribute. Thanks for giving this a read, and thank you, Douglas, for giving me the opportunity to check out your book! It was awesome!