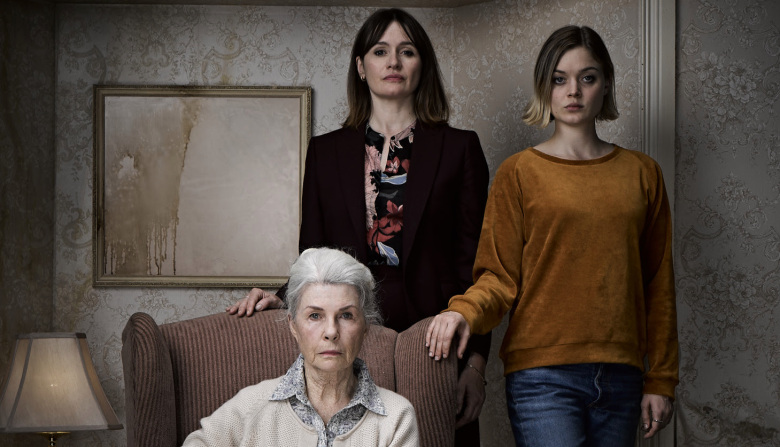 The last few years have seen an increase in quality from that of the “slowburn”/existential horror genre, with films such as that of ‘It Follows’ (2014) and ‘Hereditary’ (2018) creating more haunts and scares than you could imagine seeing from your average thriller or paranormal slasher, forcing the viewer to focus on the background. This genre of psychological torture has provided new and upcoming filmmakers with the opportunity to explore fascinating, yet terrifying ideas and stories whilst remaining on a lower production budget, and this continues to be the case in IFC Midnight and Director Natalie Erika James’ debut feature, Relic.

For a runtime of only eighty-nine minutes, it is surprising how effectively the film utilizes it’s dramatic beats from scene to scene. The first two acts do take their time developing and crafting a creepy, and almost gothic horror house feature while the finale takes elements of claustrophobia and the films themes of Alzheimer’s and the effect it has on family and delivers an ending that will have horror fans talking for years. Relic features a mother, Kay (Emily Mortimer) and her young adult daughter, Sam (Bella Heathcote) venturing to the woods to find that her mother, Edna (Robin Nevine) has disappeared, and after a few days of searching she reappears, only there is a dark presence growing from not only herself, but the house they occupy and as they try to understand the secrets her mother may keep, they find themselves under a threat her mother tries to hide.

From the opening sequence, which depicts the moments Edna is, presumably, introduced to the prescience, causing her house to flood and becomes the catalyst for the rest of the film, Relic oozes eerie tones and uncomfortable scenes that not only satisfies the hunger of a viewer looking for a scare, but a truly dramatic, and ultimately tragic tale that will leave you feeling mournful and sad as opposed to frightened and shocked. The themes of losing a family member to a mental sickness or disease is one that hits very closely with many audiences, Natalie Erika James had mentioned in an interview with Stuart Kemp from ScreenDaily back in April that Relic had taken inspiration from her own experiences with her Grandmother whom had been dealing with Alzheimer’s during production, and it is clear that this was a passionate subject for the young director. There are a plethora of creative and interesting shots during the final act that will force an illusion at times on your eyes, and one in particular that won’t leave your consciousness for a long time.

The standout performamce is without question Robyn Nevin’s portrayal as Edna; she delivers such a range of emotions from sadness, curiosity, anger, and frightfulness that forces you to keep your eye an her at all times even if she may be purposely kept out of focus. Emily Mortimer is held to a more conservative role as the concerned mother, and Bella Heathcote is given a chance to show her acting chops in the final act, however they are unfortunately overshadowed by Edna’s characteristics. For the majority of the viewing and even afterwards you are left questioning whether she is suffering from a form of mental disease, if she is possessed, or if it is both, and that in itself is the beauty of Relic with the dramatic themes being just as important as the horrific.

With very minimal problems throughout, primarily pacing and a few awkward editing choice issues, Relic very easily accomplishes what it sets out to do; tell a story about tragedy and family whilst utilizing elements of psychological horror. Relic is a film that utilizes every ounce of it’s smaller budget and is an excellent display of working with set designs and fascinating cinematography, and it is one that horror and drama fans will absolutely love.