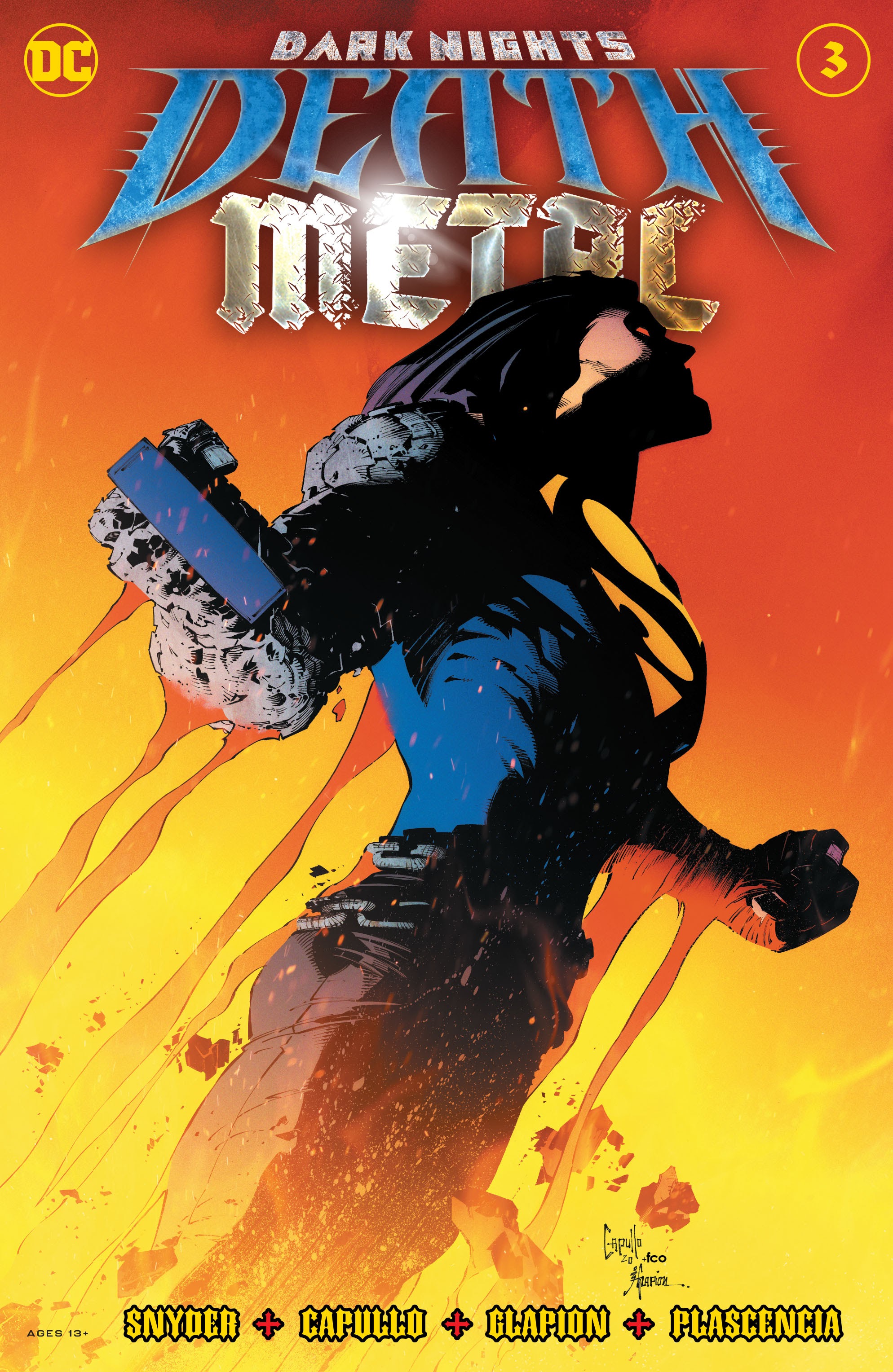 It would seem that the heroes of the DCU are about to embark on one of the most insane plots to save their multiverse, ever. Simple as that. The sheer scope and stakes of Death Metal is GIGANTIC! With little hope left, the heroes do what they do best and face the danger. Because on their shoulders rests the fate of the entire Multiverse and Omniverse as a whole. Let’s dive into what happened in this months DEATH METAL!

When we left off, the team was taking their rocket ship to New Apokolips to free Superman from his prison. They crash land and together, along with Swamp Thing and Harley Quinn, Batman and Wonder Woman brace themselves for what’s been happening to Superman. They leave behind Jonah Hex, who detonates the nuclear battery when the wreckage is being searched by a Brainiac-Batman and Red Lantern/Atrocitus-Batman. The team travels deep into the area, which is controlled by the Darkfather, a Dark Multiverse version of Batman who killed Darkseid and became the new Lord of Apokolips. The minions of Parademoms are now ParaRobins, swarming the area like locusts. They come upon the prison, designed by Mister Miracle once the evil Batmen were able to extract it from his mind. It’s all been built to help break Superman, using different colors of Kryptonite to weaken and destroy his cells.

See, being the all powerful superhero, Superman needed to be broken physically before he could be infused with Crisis Energy, which would’ve turned him into one of their most deadly weapons. The process is almost done when Darkfather begins to tell Superman that the reason almost every Dark Multiverse version of him is a tyrant is because he fears he can’t ever save humanity without forcing them to behave. At that moment, Batman and the heroes step in to save Superman.

Dealing with a evil Batman is one thing, but one that is basically Darkseid with a army of ParaRobins is another. The group moves quickly but Mister Miracle states that if Superman is removed too early, the different colored Kryptonite will shatter and explode his cells and cause crisis energy to flood into him. Batman attempts to remove him regardless, when he’s shot by Darkfather with the gun he used to shoot Darkseid back in Final Crisis, this time with Omega beam energy, but this time it won’t send Batman thru time, it’ll erase him from history. But fearless as he always is, Batman stands between Superman and Darkfather and takes the shot to his chest. Surprisingly, he survives due to a “Bat-Blocker”, and breaks Superman out of his imprisonment stating the crisis energy only tickled him before upper cutting Darkfather put the building.

With the Trinity reunited, the next step is to recruit the strongest person in the universe. No, it isn’t Superman, they don’t require physical strength, but psychic. But first, we cut away to Lobo on his secret mission, and he’s murdering cute cartoony pacifist creatures in the Fifth Dimension. Slaughtering all the cute critters, Lobo shoves his arm down an equally cute talking tree before pulling out a small item, seeming to be another piece of the item he found back in issue one.

We return to the Metalverse where the Flash, Wally West and the JSA await the next move when a portal open and someone comes through. It’s the Robin King, an evil version of Bruce Wayne who as a child murdered his parents and Alfred for the simple joy of it, the perfect Robin for the Darkest Knight. The group realizes that their hideout is compromised and they must protect Wally from falling into the hands of the Darkest Knight, who will use his Dr Manhattan abilities to fully power up and destroy everything. Dr Fate opens a portal for them to escape before they’re attacked, and the three Flashes, together, run into the Speed Force chased by the Darkest Knight.

Back on New Apokolips, the Trinity leads their group to the underground Super-Prison where all the heroes who wouldn’t play ball with Perpetua are kept, before they release their true secret weapon…Jarro. In his cell attempting to escape, Jarro is ecstatic to see his “father”, before Batman tells him to not do this in front of Superman. Being the most powerful psychic being in the universe, the heroes need Jarro to complete their plan to recreate the Multiverse by mentally blocking the Darkest Knight and his Batmen from detetcting what the Trinity will be doing.

After a speech by Wonder Woman about their goals and how their past mistakes are what led them all to this horrid world, they embark on their journey into the Dark Multiverse. Wonder Woman explains that Perpetua is siphoning Crisis Energy from the Dark Multiverse versions of all the crisis events and they must cut her off from obtaining anymore.

Elsewhere, Lobo is speaking to the person who hired him to collect the secret items from around the universe. He tells them he has all the stuff they required and it’s revealed then that the person who hired Lobo is none other than LEX LUTHOR! Lex hides out at the dilapidated Legion of Doom headquarters with part of his face disfigured as if it was partially melted. It would seem Lex is seeking revenge against his former Goddess for tossing him aside in favor of the Batman Who Laughs and the event gets that much more interesting.

Altogether, this issue was jam packed with awesome moments from the Super-Prison to the Jarro/Batman hug to the Lex Luthor reveal. Death Metal is shaping up to be crazier and more cinematic than Metal, which is already a high bar to pass. Snyder and Capullo have always been one of the best creative teams at DC Comics along with their inker and colorist Glapion and Plascensia respectively. What comes next is a mystery given how there’s three tie-ins coming to cover what’s going on with some of the heroes in between this issue and the next one but it’s pretty much guaranteed at this point to not disappoint. Keep up with UpYourGeek to see what happens next or support your local Comic shop in these trying times.