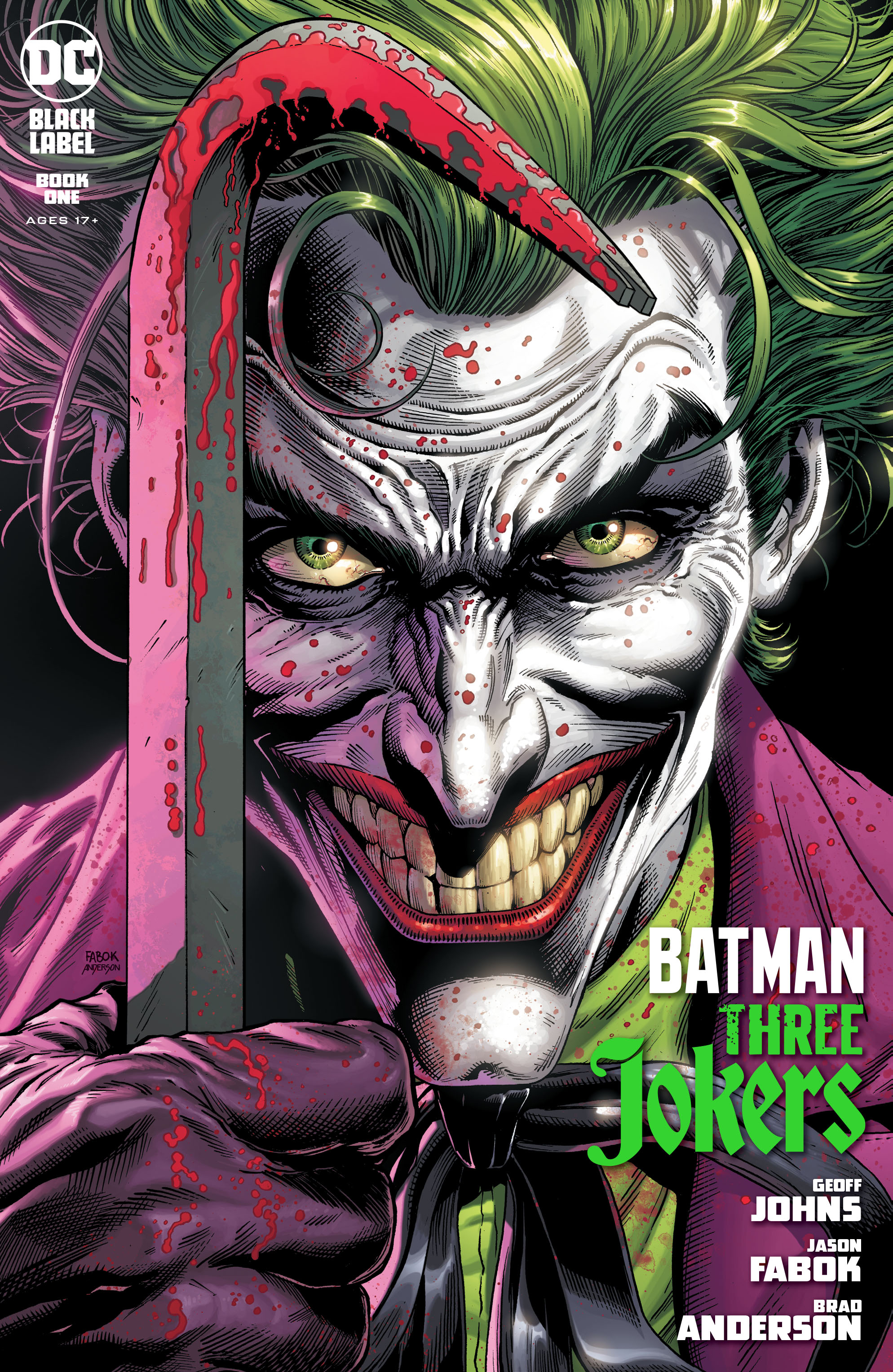 Back in 2016, when DC Universe Rebirth dropped and fans everywhere were clamoring for a return to the heart of DC, there was one particular mystery that stood out aside from the Watchmen reveal: The Three Jokers. For those unaware or simply forgotten after all these years, towards the end of the New 52, Batman had gained control of Metron’s all-knowing chair. With it, Batman had gained access to all knowledge and he used it to ask who the Joker was. He was only given the answer “Which One?”, to which Batman was horrified. Upon further investigation, it was revealed that there Three Jokers altogether, causing chaos out in the world. Well, after the long wait for answers, the first issue of three is out today and we’ll dive into what happened. But heads up…

To begin, we see Batman driving recklessly onto Wayne Manor property. He crashed into his parents tombstones before climbing out, badly wounded from a knife stab in his side. He’s helped down into the Batcave by Alfred, so this would place the story sometime before he was killed by Bane, although this being the first canon Black Label book is yet to be confirmed despite artist Jason Fabok said it’s up to fans for this to be canon or not.

As Alfred patches Bruce up, he asks what it was this time that caused Bruce to stumble back home half dead. A quick flashback shows Penguin stabbing Batman in his side, and back to Batman as he says it was an umbrella. Bruce sits there as Alfred comments on how another scar will go unnoticed as his body is covered in scars from all sorts of prior engagement with his Rogues Gallery.

As he’s sewn up, Bruce recalls the night his parents died. As they leave the Monarch Theater, they walk into the alleyway where Joe Chill holds them up and kills his parents. Bruce snaps back into reality when a news anchor reports that a recent triple murder committed by the Joker has just occured. Three men were found at Ace Chemicals, dressed up as members of the Red Hood Gang. Batman gets dressed again before heading out to investigate.

Elsewhere, Barbara Gordon is working out on a treadmill while a commerical for restless leg syndrome plays. The scene juxtaposes on her memory of being shot and paralyzed by the Joker. Ever since she had spinal surgery to regain use of her legs, Barbara has done her best to keep moving. To never let her legs go to waste, she would run, kick, and navigate without issue. As she goes to shower after breaking the treadmill, Barbara traces her bullet scars and can’t ever forget the face of Joker as he committed his horrible crimes.

Finally, we cut to the third person tied into Joker’s neverending war against the Bat-family: Jason Todd. Jason is currently fighting Joker’s goons in a cemetery, demanding to know where he is. As he crushes each goon brutally, Jason remembers the night Joker beat him nearly to death with a crowbar before leaving him to die. He remembers the smile as each hit covered his face more and more in blood. Jason finally gets one goon to admit that they don’t know where Joker is. Jason admits that he knew, he just wanted to stretch his legs before his night.

Batman approaches the Ace Chemical crime scene as CSI pulls the helmets off the victims. Detective Bullock notes that they bear an remarkable resemblance to the Mob guys who died the night the Joker supposedly fell in the vats. Gordon notes, however, that there were two other Joker attacks that night, all occuring at the same time. One was a comedian being killed on live stream and another was some of the Moxon crime family being wiped out, all supposedly by the Joker at the same time. Three crimes, Three Jokers, all at once. Gordon doesn’t know but turns to Batman to ask how he’ll deal with this. Batman begins speaking about the evidence but not to Gordon, he’s speaking to Batgirl who is watching from above. They both agree that three Jokers can’t be coincidence since Bruce told his family about them and how they could possibly organize something like this and thus they may be plotting something. One of the victims is seemingly alive and loaded into an ambulance, unbeknownst to anyone that Jason Todd is inside waiting to interrogate the victim for clues.

Elsewhere, a Ace Chemical truck drives through the woods to a small dirty cabin. Out of it walks a thin man, laughing. Upon reaching the cabin, it’s revealed that the driver is Joker and the man who opens the door is also Joker. Commenting how one is wearing the others clothes, they settle in and wait for the boss to give the next step. The boss, a much older Joker, says their plan is the same as always, to “make a better Joker”. He flips a coin and orders one of them to prepare their factory and the other to seek out talent.

Back in the ambulance, Jason grabs the victim and demands to know any details about the Joker and where he could be. The driver hearing the noise and swerving because of it, Batman and Barbara stop the ambulance thinking it’s something else. Upon discovering it’s Jason, the two denounce his actions and demand he stop this violent approach to the mystery. Jason has too much in this, Batman and Barbara have suffered under Jokers maniacal schemes but Jason actually died because of him. He wants this monster to be ended as much as anyone, yet he agrees to work with Batman and Batgirl to solve this. Jason points them in the direction of a Gotham Aquarium after picking up a lead earlier on.

The trio investigate the Aquarium where they notice some of the fish tanks are filled with toxins that the Jokers has recently stolen. They even stumble upon a Jokerized shark that makes Jason note is a first for the villain. But they’re suddenly ambushed by a group of Joker goons, including his old henchmen, Gaggy, a tiny man the size of a child. A fight breaks out and the trio work quick to bring them down, with Gaggy shooting wildly. Due to his recklessness however, he manages to crack the glass and cause the Joker Shark to swallow him. It’s at this moment that one of the Jokers attacks with a bowl of smiling piranhas. Using all sorts of corny jokes and gags, it would appear this Joker is the Silver Age Joker and therefore is more silly, yet just as dangerous as the other two.

However, the trio easily put him down and cuff him to a chair. Batman commands the two to wait for Arkham transport whole he responded to Gordon’s call that they have engaged with one of the other Jokers. Batgirl and Jason begin to comment on how this Joker looks thinner than they remember and how it’s been a long time since hes used corny gags like razor sharp playing cards, and apparently Acid-spewing flowers as Joker mentions right as he attempts to burn Jason’s face. Batgirl pulls him away as it burns a hole thru one of the cards Jason was holding. Joker laugh, talking about how Jason was always one of his favorite acts against Batman, how killing him helped further his cause. Jason tells him he’s stronger now, but Joker questions if he truly is then why is he using his old moniker. He mentions how it’s so weird that a victim would take the name of their assailant and attempt to be more than it. Jason won’t hear it, but Joker quotes how Jason begged for him not to die, and mentions how he begged so hard, he even said to become Jokers personal Robin. Joker tells Jason that he’s been his Robin every day since then, because Jason’s entire identity has been based around the Red Hood, which Joker made iconic. Batgirl tells Jason to ignore him but Jason has had enough. He pulls out his gun and aims it at Joker and while Batgirl tells him to put it away, Jason says the time has come to finally end this mad man. Batgirl attempts to disarm Jason and even throws a batarang at his pistol, but she misses by an inch and it’s at that moment…

Batgirl looks horrified, as she has just witness an ally what the hell he has done. Jason says he’s done playing game and this is how it needs to end. He tells her if she truly wanted him to miss, she would’ve not missed, as she has never missed her shot before. Batgirl, offended by his allegation that she let him kill Joker, tells Jason to screw off and leaves him to ponder whether or not he killed the true Joker.

Act one of the miniseries is over, and so far we’ve been given a little and alot. We’ve seen that the Jokers have been in contact and seemingly in an alliance. They’re led by the oldest Joker, and the three have a plan to create a “better” Joker. The Bat trio together have enough trauma by Jokers acts to want to end this evil clown axis for good. Geoff John’s is fulfilling his final contribution to the Rebirth story and it’s clear he’s intentionally made this story’s canon placement vague for the purpose of allow fans to include it wherever they can fit it. Jason Fabok and Brad Anderson are on their A-game here with some of their best work so far. The nine panel assortment helps made this a tight story with beautiful art commanding your attention. Let us know what you think of Three Jokers and stay tu