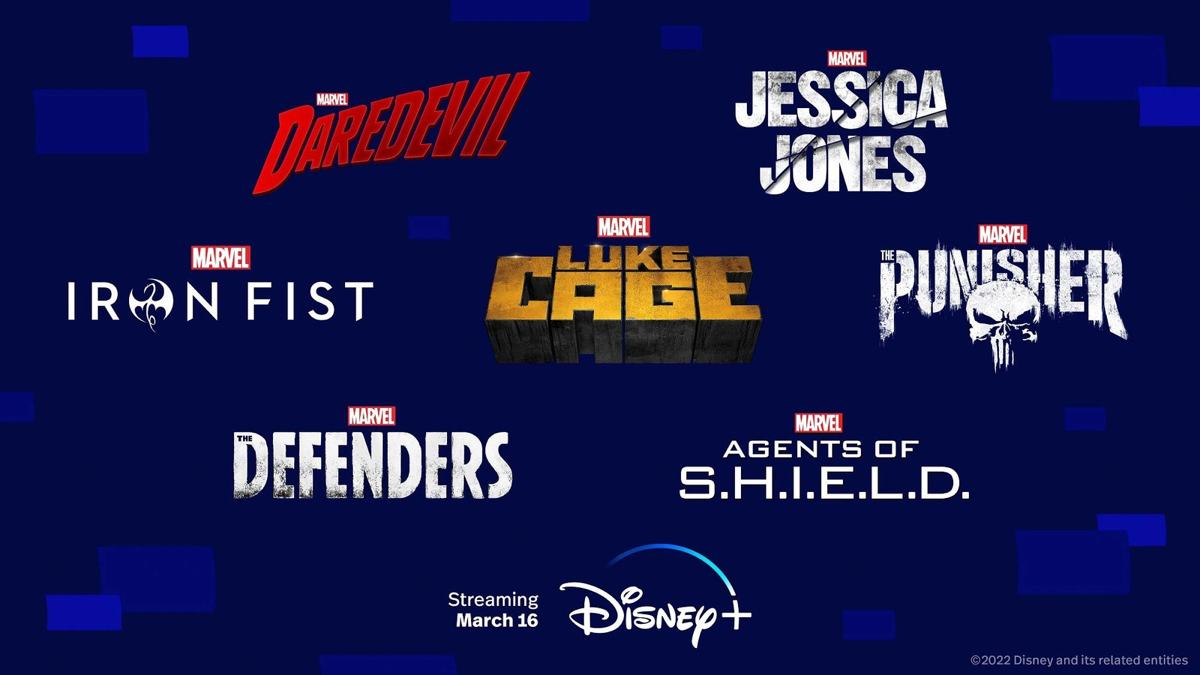 Disney+ has taken the leap into mature waters as they have officially confirmed the cancelled Netflix Defenders franchise will be arriving on the streamer March 16th. The former Netflix exclusives Daredevil, Jessica Jones, Luke Cage, Iron Fist, The Punisher, Defenders, will all be available to watch. This move also includes Marvel’s Agents of SHIELD. The addition of more mature content comes with some updates, as Disney will be including new parental controls rolling out the same day.

The shows will be available on Disney Plus in the U.S., Canada, U.K., Ireland, Australia, and New Zealand.

For parents logging in to use Disney+ from March 16th onward, you’ll be asked to update your parental controls. You’ll have the option of setting per-profile content rating levels, PIN codes for more mature accounts and “Kid-Proof Exit” questions for child profiles. The original setting of the TV-14 rating will stay the same should parents decide not to change their settings. The service has used strategies like this in other countries, such as Europe and the Middle East, but is now expanding that approach to the US.

Some may be wondering why Disney decided to move the TV-MA rated shows to Disney+ instead of Hulu, where more mature content is expected. Disney reported that it felt bringing the Netflix shows to Disney+ instead of Hulu, “made the most logical sense” to serve Marvel fans by streaming more content in one place and reach a “broader audience,” the company said. The parental controls will help Disney+ preserve both its trust and its reputation.

A few weeks ago, Netflix officially revealed that all of Marvel’s shows would be leaving the streaming service on March 1st. Just in time for Disney+ to bring them home. It’s unclear on what this move means for Disney and the future of these characters. Daredevil (Charlie Cox) and Kingpin (Vincent D’Onofrio) have already been seen in the MCU in Spider-Man: No Way Home and Hawkeye, respectively. While there have been rumors swirling about The Punisher showing up, that’s not confirmed whatsoever. There’s also been no sign of Jessica Jones, Luke Cage, or Iron Fist so there no telling what Disney’s plans are, if any.

This is exciting new nevertheless for many Marvel fans, who have been holding out hope that they would be able to see these beloved, grittier characters, make a come back with in the world of the MCU. Fans will have to wait and see if anything evolves out of this move by Disney.

In the meantime, Marvel’s next major release will be Doctor Strange in the Multiverse of Madness due out May 6th, 2022.