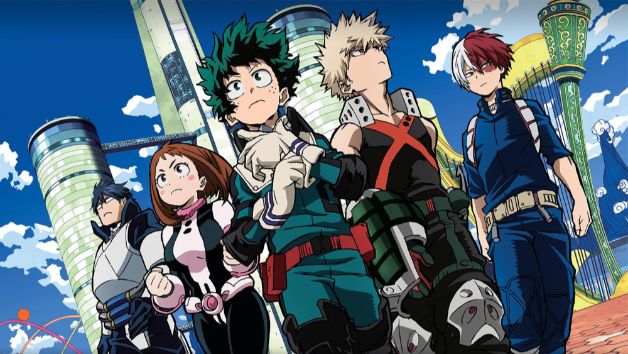 Anime is one of the most interesting forms of artistic expression in regards to cinema. Anime’s style comes purely from the cultural intricacies of Japan and its worldwide recognition and admiration has been felt many times over. It’s easy to see its influence in American media with one of the biggest being the Matrix series. Those films tapped into the Japanese aesthetic early on, but what has also been interesting to see is how Western Media has impacted Anime. There are several series that have taken great influence, but the most popular series currently making waves is My Hero Academia (Boku No Hero Academia). The story revolves around young people with incredible abilities being taught the ways of professional heroism at the hero high school, UA. This anime follows a superhero formula heavily influenced by American superheroes and especially Marvel heroes. With this being said the series uses its influence to do many new things including improving on concepts brought about in other superhero media. Since we are currently in between seasons of this fun and fresh show it is a great chance to look at and analyze what My Hero Academia gets right especially in comparison to other superhero narratives.

What separates a good superhero story from a great one is in how well defined and developed the characters are. These individuals are who you will be following along  their journey. Their stories will be the backbone for the entirety of the series and they will have to grow and evolve to defend themselves against any threat that comes their way. There are a lot of well developed characters in Superhero stories, but My Hero Academia easily exemplifies the best that characters can be given the world they inhabit.

The lead protagonist Izuku Midoriya is gifted his ability, unlike the other characters in the world solely because of his heroic ability to act without hesitation. The number one hero, All Might noticed his potential and wanted him to be the person who inherited his own abilities, which are referred to as “One for All”. Midoriya’s powers are borrowed, but they reflect the true selfless action of heroes. This theme carries on throughout the show and many of the other characters struggle with this concept, but that struggle leads to a plethora of interesting individuals with their own goals and desires. The world they inhabit places a large emphasis on the top spot of hero work. There is certainly a competitive edge among the students of UA and they take everything with a seriousness that is reflective of the Universe. Their competitive side is often put up against their need to stay together to protect one another and to be the best heroes they can be.

The students of UA are as diverse as the heroes they worship. There are the characters who deal with family issues and struggle to be the best while other characters are there for less ambitious reasons and want to legitimately help the people they care about. There is way too many characters to lay out individually here, but their own goals, ambitions, and development really help to keep them memorable. Each character stands out and while other superhero media has characters like this the execution of these characters is exceptional. These characters make the show great and it is why it has the following that it does. I want to know what will happen to them and it is no surprise that other people are just as invested in these characters. They are the essence of why the show is able to work so well even coming from the original Manga their transition to animation has been extremely accurate. With these interesting characters it only makes sense that they all have unique powers, which this show excels at showing off.

In this World the powers are referred to as Quirks and the abilities begin to manifest when these characters turn 4 years old. With Midoriya he has an exception where his power was given to him and it is a collective power that is passed from hero to hero. This exception brings an interesting element to this world that asks questions that have yet to be completely answered, but every other major hero has all had naturally developed abilities. Some of the best examples of these powers come from character whose personality fits their ability. The most obvious example of this would be the character Katsuki Bakuo whose quirk is the sweat in his body can be used to create explosions that he can control. He’s got explosive powers, but also an explosive temper that more often than not is directed at everyone he comes into contact with. All of the characters have quirks that fit what they are about and and an exciting element is seeing how they adapt and learn to use their abilities in new and interesting ways that will help them on their journey to be great heroes.

One of the best aspects of these abilities is that they can have downsides. Midoriya’s ability is so strong that it often breaks his own limbs. The other characters have limits to their usage, which is likened to weakening of muscles from overuse. The traditional view of super powers is that they can be limitless or rendered useless by villains, but in this show your own negligence can lead to issues with the powers. Their quirks need to be strengthened honed like the rest of their body. It makes this world feel all the more grounded even in its most extreme moments. It makes a lot of the characters have a weakness that isn’t always directly locked down to a villain. It’s a wall they must push back in both emotional and physical ways. It is unlike most other superhero media and deserves some recognition for getting this component right.

The thing that a lot of superhero media often has issues balancing is the way that governments and society react structurally to the existence of superheroes. Some superhero fiction deals with it well and tries to create a world that reacts to it, but this show has a much different method. It asks the question as to what if the government and the world were built up around superheroes with clear guidelines and laws.

The system that the world has created gives permits and licenses to heroes to work on an official capacity. This official capacity is fairly difficult to attain, but it serves its purpose well and the hero schools are there to bring more heroes into an official capacity. The entire series is set within UA. A prestigious and well regarded high school for hero training and the majority of the main characters are mainly students or former students. The series unlike other superhero media uses this structure brilliantly to learn information about this society when the students do. The world expands as they progress and it is a pretty inventive way about dumping exposition when needed so that it doesn’t feel out of place. There are many levels to work towards before they can become an official hero, but the government’s role determines the capacity at which the heroes can serve. A lot of responsibility is thrown on the heads of these students and the teachers.

With the government officially sanctioning these heroes it has created a new cultural identity. Heroes are seen as the biggest celebrities with All Might being the number one. The symbol of justice. The good people look to these heroes in the darkest of times and they rely on being saved when possible. This celebrity culture has made some heroes worth quite a lot of money, which has created a caveat to this. Villains are resenting the state of heroes and criticizing the money that heroes receive for their duty. They have a giant resentment against the whole system. This motivation for these villains is a fascinating one that I haven’t seen done as much in other superhero stories to this degree. It is successful in keeping all of their characters multifaceted and sometimes these villains do have a valid point, but their methods are obviously extreme. The societal reaction on all fronts is unique and makes the world as engaging as the heroes we happen to be following.

My Hero Academia has easily become one of my favorite shows and it is one of the best anime I have seen in some time. It is a refreshing take on the superhero genre that is still extremely popular and it is proving itself worthy of being considered up against the best of superhero media. It does so many things right that I feel like it is worth dissecting and discussing in comparison. If you have yet to see this highly entertaining show I certainly recommend it.